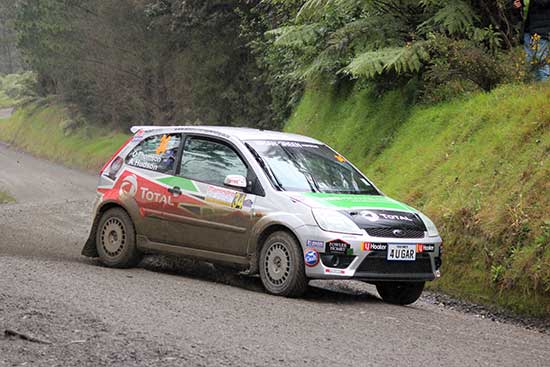 Waiuku’s Dylan Thomson has achieved everything he set out to do at round four of the Brian Green Property Group New Zealand Rally Championship, the Mahindra Goldrush Rally Coromandel, moving back into the lead of the NZRC two-wheel drive class after taking victory.

Thomson headed to the Coromandel-based event keen for a strong result after failing to finish the previous round in Christchurch and made the perfect start as he and co-driver Amy Hudson were 16 seconds faster than the chasing pack over the opening stage.

In the second stage, chief rival Max Tregilgas bounced back to take some time out of the lead and on the third special stage the pair could not be separated down to the tenth of a second.

The 22-year old was forced to battle hard throughout the day but was able to hold the upper hand right throughout the day. Heading into the final stage, Thomson knew he would have to charge and did, setting a time more than 20 seconds faster than his first pass in the morning, to take victory.

“We certainly had to push hard all day, there were times when Amy and I were wondering what we’d have to do to take the stage win but thankfully we were always on the right side of the equation,” said Thomson.

“The Dunlop tyres stuck really well and we were able to really push hard all weekend, which was just as well. It was a great battle.”

As well as taking a class win, Thomson and Hudson were also the third two-wheel drive car home outright, beating home many of their more powerful rivals on some of the most demanding roads seen in the NZRC all season.

The class win sees Thomson move back into the championship lead, now 13 points clear of the chasing pack with two rounds remaining. The series now takes a short break before taking to the roads of the King Country and Waikato for Rally Waitomo on October 14.