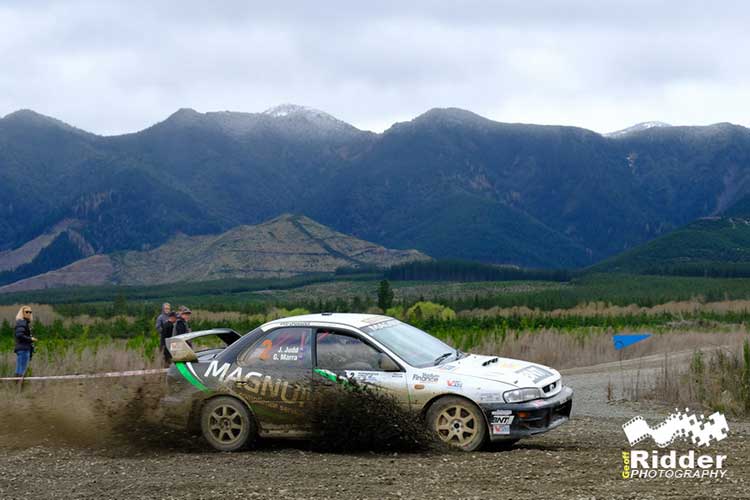 Jeff Judd on his way to victory in the 2017 Hanmer Rally. (Photos: Geoff Ridder)

Jeff Judd and Grant Marra took a 15 second win in the Hanmer Rally in New Zealand’s South Island on Saturday, after a close battle with Dylan Turner.

Judd’s older Subaru Impreza WRX snuck home ahead of Turner’s new Audi S3 AP4, despite not winning any of the 10 special stages.

With a field of 79 cars, the Hanmer Rally was a spectator friendly, compact event that was held around two hours north of Christchurch in typically wintery conditions.

“The Barina was going awesome in the morning with a 20 second lead after the first three stages,” Marston said.

“Unfortunately a small issue cost us over a minute at the start of stage 5. We were able to continue and post more stage wins, ending up in fifth. Really positive about the progress we are making with car setup, it just gets better and better to drive.”

Fourth place went to the giant-killing Ford Escort RS1800 of Deane Buist and Karl Celeste, ahead of Marston in fifth and Matt and Tom Penrose, who brought their Subaru home in sixth.

Retirements included Job Quantock (Lancer Evo 7) with drivetrain problems, and Regan Ross (with Derek Ayson in the co-driver’s seat!) with a broken axle in his Escort.

For full results head to http://www.chrissport.co.nz/event.php?db=hanmer2017&p=*