Focus turns west for ARC round 2 and Forest Rally

A revived field, multiple team changes and new cars will bring a renewed energy to the Make Smoking History Forest Rally in Western Australia’s South West next month, 27-29 April. Bound to make the push for the win even more competitive is the fact that only two of the leading drivers, Tankformers Eli Evans and Subaru Motorsport’s Molly Taylor, have stood on the top step of the Forest Rally podium. The teams hit the dirt for the first time in 2018 this weekend contesting the Eureka Rally in Ballarat, Victoria and it was Toyota Genuine Parts’ Harry Bates and John McCarthy who will head West on top of the CAMS Australian Rally Championship (ARC) points table. After debuting his new Toyota Yaris AP4 in Ballarat Bates will be looking to cement his ARC lead and secure his first win out West. “Forest Rally has been a really strong event for us in the past, I actually managed to take my very first heat win in the ARC in WA at the very start of 2016,” Bates said.

“It’s an event that is a big challenge for a driver. You’ve got that unique ballbearing surface, but the roads are really enjoyable and it’s a really well organised event and Busselton is a really great place to visit too.”

South Australian rally favourite and seasoned competitor Steve Glenney will be heading back to WA in the driver seat for first time in a decade following a last minute switch to the line-up of the Craig Brook’s team. Glenney wasted no time making his mark on the championship in Victoria finishing second outright and will be a force to be reckoned with in the forests around Nannup. An experienced tarmac competitor he will also carry a distinct advantage on the tarmac stages around the Busselton Foreshore on Friday and Saturday evenings. 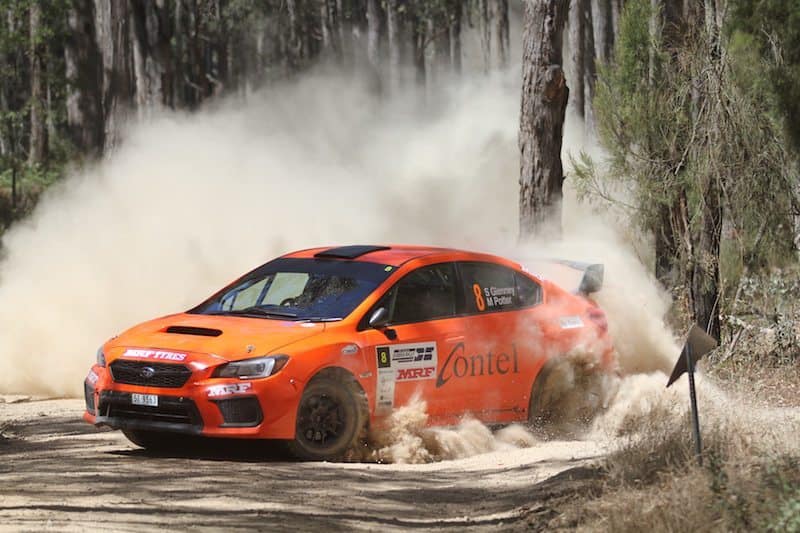 It was a brilliant ARC comeback for Steve Glenney at the Eureka Rally, taking second place. Photo: Luke Whitten

“Forest Rally is a great event, it's generally a bit slipperier and so you spend a lot more time on the corners and judging your length of corners but it’s enjoyable and it’s a great part of the world to go to, so I’m looking forward to it,” Glenney said.

Three time Australian Rally Champion Eli Evans has a new co-driver, West Australian Ben Searcy, and has admitted the team have some work to do if they want to take the championship lead off Bates come April. “Aggressive drivers do really well at the Forest Rally and I tend to be a little bit aggressive at times,” Evans said. “It's been a good rally for me in the past and we're looking forward to it. We've got eight weeks before we have to start that event and we've got a list of things we want to change on the car and see if we can find that extra pace.” Subaru Motorsport’s Molly Taylor, the 2017 Make Smoking History Forest Rally Champion, will be hoping to leave her run of bad luck in Victoria with a puncture and run in with a Kangaroo leaving her fifth in the championship coming into the second round. In a boost for local hopes at the Forest Rally Brad Markovic returned to the drivers seat - and the ARC - for the first time since back surgery in 2017, joined by fellow West Australian Toni Feaver in the co-drivers seat, they sit sixth in the championship. Neal Bates Motorsport’s Lewis Bates will be making the trek West for the first time and will be hoping to make a strong impression on debut Former Forest Rally event winner, Victorian Glen Raymond, is weighing up his options after a competitive showing in Ballarat and will hopefully join the field heading over to contest the second round. More than 50 crews from across Western Australia and the nation will contest the Make Smoking History Forest Rally through the forests of Nannup and around the electric Trade Hire Busselton Special Stage. The event is the second round of both the CAMS Australian Rally Championship® and the CAMS Onslow Contracting WA Rally Championship.
MAKE SMOKING HISTORY FOREST RALLY SCHEDULE OF EVENTS
Wednesday 25 April
ANZAC Day
Thursday 26 April
Testing and Recce
Friday 27 April
Recce, VIP Day and 2 Stages of the Trade Hire Busselton Super Special Stage
Saturday 28 April
8 Stages in Nannup Forest, service park Nannup, 1 x Trade Hire Busselton Super Special Stage
Sunday 29 April
8 Stages in Nannup Forest, service park Nannup