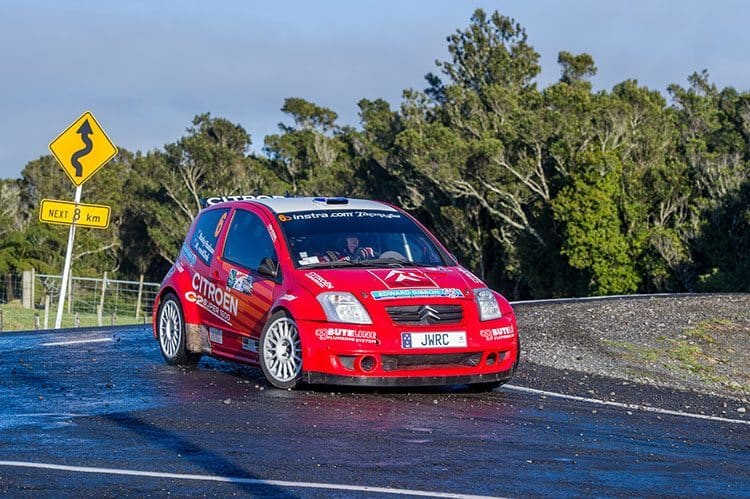 Marcus van Klink has produced a giant-killing performance in his Citroen C2 Super 1600 car at the weekend’s Taranaki Tarmac Rally.

As well as changing his driving style to adapt to the Citroen, van Klink had to get used to a different co-driver with Rocky Hudson stepping in to replace the unavailable Dave Neill.

Wet conditions greeted teams for the first four stages and despite only having two-wheel drive and a 1600cc engine, van Klink was immediately on the pace with the third fastest stage time.

A storming run through the second stage saw the start of a string of runner up stage times that would last through the remaining three stages of the morning and by the time van Klink reached the lunch time service, he was holding down second spot.

The afternoon saw the rally move to faster and drier roads where the small Citroen was expected to struggle against the more powerful turbo-charged four wheel drive cars and a fourth fastest time on stage five saw van Klink fall to third. Despite overshooting a junction in the next stage, the result was safe and a podium finish was secured.

“It’s an awesome result, I’m absolutely rapt. I thought if a few had some issues we might get on the podium, but we were on there from the very first stage,” says van Klink. “It took a bit to get used to the Citroen after the Mazda, it’s a totally different car to drive, but it was an awesome day in the seat.”

The Klink Rallysport team now head to Rally Gisborne with the Mazda on July 2 where they will look to maintain their top five position in the Brian Green Property Group New Zealand Rally Championship.