The forest of Bulahdelah came to life with the running of the Nissan Datsun Drivers’ Club round of the NSW Development Rally Series, the NSW Excel Rally Series and the Myall Introductory Rally.

The Myall Lakes was round 3 of the highly prized Techworkz Development Rally Series, with the year-end prize still up for grabs with a different winner at each round.

The Giddens/Graham team took a dominant victory.Crews began arriving Friday afternoon, with some travelling from all over the state.

With a good field of 38 crews for the Myall Lakes and 8 for the Myall Introductory Rally, the club was looking forward to a great day of rallying.

The crews tackled 100km of competitive rallying over 8 stages. After many years as a pacenoted rally the club returned to a “blind” rally. This in its self was a challenge to negate the advantage crews that had previously competed at Myall, and potentially had an advantage with a copy of “notes”.

The outright win was to be fought out between Giddins/Grahame, Hoy/Bennet and the McCloy father and daughter combination.

The Giddins/Grahame crew immediately set the pace with a stunning 11 second win on the 7.65km first stage. The surprise on the stage was the Turnbull combination, closely followed by McCloy and the Hoy/Bennet crew.

There was no surprise to see the Giddins/Grahame crew take another decisive win on the second stage. The Turnbull team was just ahead of the more fancied crews of Hoy/Bennet and the McCloy team.

The Horses stage was going to be the car breaker for the event with more humps than anyone can remember, reducing the gap that Giddins/Grahame had created. Chris was heard to say “no need to break the car” on this most difficult stage. Young “gun” Jason Parrott took the bit between the teeth and set the 5th fastest stage time in his first rally.

Stage 4 was the longest stage of the rally with a flowing 17.69km of forest roads. The Bland/Rourke crew came to grief on the stage. The newly purchased VT Commodore was totally destroyed when it hit a tree on a fast left hander downhill. Tree one, Commodore nil.  A big thank you to the crews that stopped and helped with the situation. 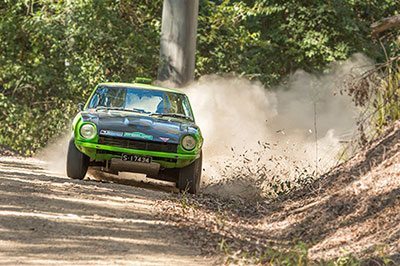 Veteran Wayne Hoy was secon in his Datsun 260Z.With stage four out of action the remaining crews proceeded to service at the Bulahdelah Showground before heading back to the forest to tackle the three stages once again.

Again the rally was dominated by the Giddins/Grahame crew, taking a lead that was never to be lost. The battle was on for young and old for second and third outright between Hoy (260Z) and McCloy (Datsun Stanza). After the stage 4 both teams were equal second after 50km of competitive rallying.

Hoy/Bennet must have had something special at the service break as they did not lose a stage during the afternoon session, taking second place by 12seconds from McCloy.

The Giddins/Grahame crew continued the domination, winning every stage and taking a commanding 2m12sec win at the end of the rally.

The Techworkz Development Series was taken out by the Bower/Fletcher crew, with the Skelton/Trigg crew a close 7 seconds behind, with Kenchington/Denton just under a minute behind in third.

The Skelton/Trigg crew still lead the Series with Bower/Fletcher slowly closing the gap.

The NSW Excel Rally Series saw a dominate win to the Hyde/McMinn combination, over the Hampel/Hampel team.

Nissan Datsun Drivers’ Club thank all the crews and officials for a great day of rallying and look forward to 2015. 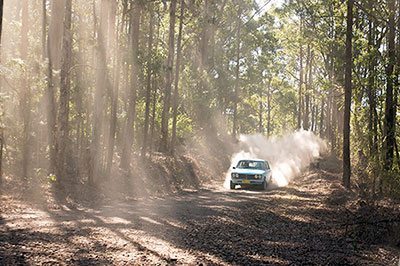