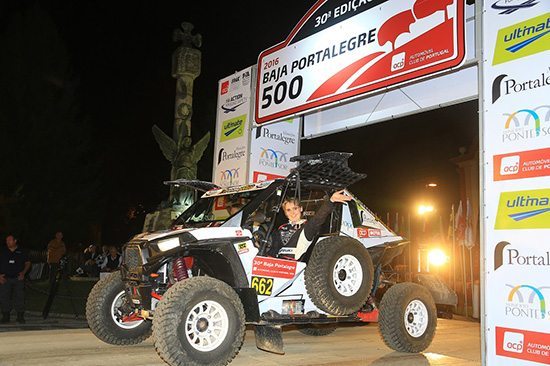 Emma Gilmour had the full cross country experience at the Portugal Baja over the weekend, leaving her addicted to the challenge and hoping to be back for more.

The Dunedin rally driver teamed up with South African co-driver Sandra Labuscagne to contest the 500km event in a Polaris off-road buggy as part of the French Xtreme Plus Team.

Although circumstances conspired against them achieving the class podium they were on target for after day one of the two-day event, Emma says it was an achievement to reach the finish line.

“This is my third cross country event in my third different car so it has been great to get experience of different events in varied vehicles. I really enjoyed Portugal as the terrain was really challenging and quite unlike the other events we’ve done.”

Her first day at the Portugal event had been enjoyable and she and Sandra were well placed in second in class and 34th overall.

“We only did 88km today [Saturday] with lots of waiting in the middle of the day, so just over 20% of the whole event. We had a pretty clean run on very varied terrain – fast gravel roads like home, farm paddocks, narrow forestry tracks and some rough rutted sections,” Emma says.

The second day began positively and the two women were improving after the opening 173km stage. Then on the final 211 km stage they were flying, up until the point where their driveshaft and gearbox broke.

“We were 13th quickest in stage and on track for top 20 finish overall and a class win. We replaced the drive shaft but had to crawl out the last 70km. Our power steering also broke when another car hit us, so it was an achievement to just get to the finish when it all turned to custard,” Emma says.

Despite the mechanical issues, Emma says she and Sandra had an amazing time at the Portugal Baja.

“The challenge of cross country rallying is very addictive and I hope Sandra and I will be back for more.”