Gilmour becomes first female to win a NZRC round 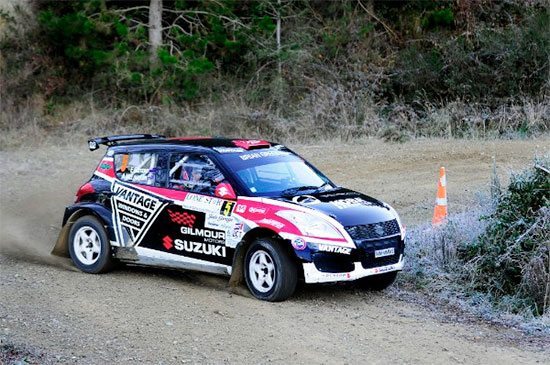 An elated Emma Gilmour has won her first ever national rally championship round and in doing so has become the first woman to win a New Zealand Rally Championship (NZRC) event.

After a dominant performance at today’s Joe’s Garage/Lone Star Rally of Canterbury, where she led from start to finish, Dunedin-based Emma also became the first Otago driver to claim an NZRC victory and joins only a handful of women worldwide who have been victorious in national rallies.

At the end of this third round of the Brian Green Property Group New Zealand Rally Championship, held in the Ashley and Okuku forests, she had a convincing 1min:15sec winning margin over second-placed Andrew Hawkeswood. Emma and Australian co-driver Anthony McLoughlin either won or were runners-up in eight out of the nine stages and bought her Vantage Windows and Doors Suzuki Swift Maxi charging home to win the final power stage.

“I’m really happy – it’s so exciting to actually be standing on the top step of the podium. Many people have put in so much effort over the years and this is the perfect way to repay them. I am also honoured to be the first female to win a NZRC round and it just goes to show – girls really can do anything!”

The victory was well-earned, Emma says.

“It was particularly satisfying because we led all day from start to finish. The car was handling really well, despite the changeable conditions and ice, which made it really slippery in the morning.”

“We had one moment where the engine coughed and spluttered after going through one of the long, deep fords but thankfully we only lost about 30 seconds,” Emma says.

“A championship round win has been a long time coming but is significant given the fact that Emma was instrumental in bringing to NZ a new generation rally car from which the new AP4 regulations have been developed. It is great to see Emma’s dedication to the sport over many years rewarded with this win.”

Emma has come close to a round win before, including beating home her rivals in a leg of the International Rally of Whangarei in 2012

“I just want to thank everyone involved. I’ve had a lot of help over the years from my sponsors, supporters and various service crews. A special mention needs to go to my current team of Lindsay, Mike and Lane, who have seen the Suzuki through its development years. We have had a few heart-breaking times along the way, so tonight is for celebrating its success and rewarding all those who had faith in me,” Emma says.

Her top result has moved her up to second in the NZRC – six points behind David Holder, with two rounds left this season.