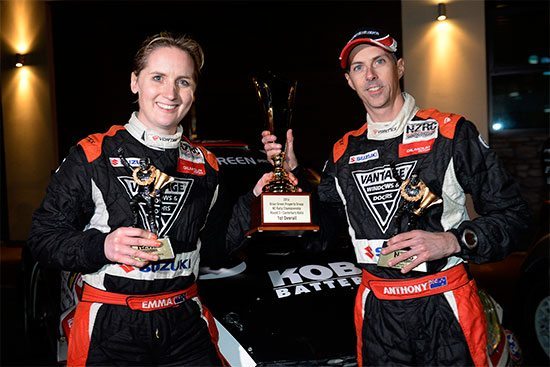 Gilmour and co-driver Anthony McLoughlin drove their Suzuki Swift to a victory of 1 minute 15 seconds over Andrew Hawkeswood and Jeff Cress in their Mazda two, with third place going to Carl Davies and Tracy Millar after a post rally penalty dropped Clinton Cunningham and Thomas Thexton off the podium.

It was a day of drama for the 36 NZRC teams. Local driver Matt Summerfield won the opening stage before engine failure, handing the lead to Gilmour, who would lead the field for the remainder of the event.

Despite leaving the road, Holder still holds the championship lead, now six points ahead of Gilmour. Hayden Paddon still holds third place despite not contesting the event, while Marcus van Klink and Andrew Hawkeswood round out the top five.

The next round of the Brian Green Property Group New Zealand Rally Championship takes place in Gisborne on July 2.