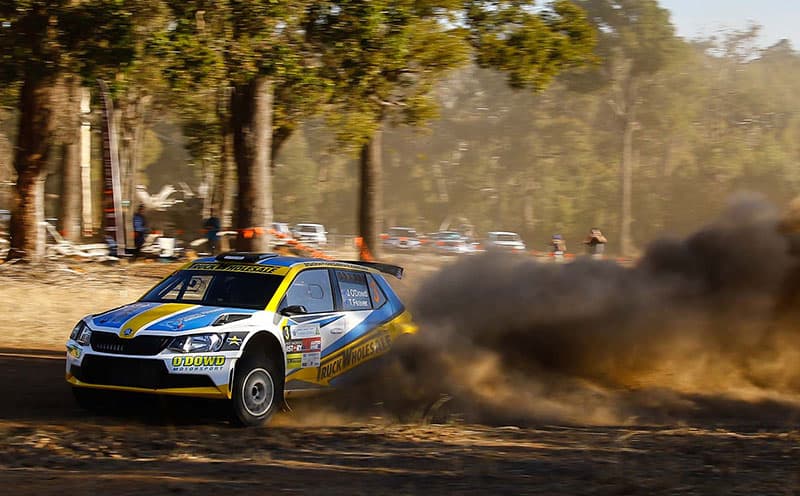 “We couldn’t have asked for a better start to the year”, a happy O’Dowd said after an intense day of rallying through farmland in the Boddington Shire.

“Unfortunately Kody Reynolds had some problems mid-way through the day and had to retire, and Stephen Oxley and Ben Searcy weren’t competing here. So just by finishing here, we’ve now built a pretty comfortable lead in the championship.”

Comprised of two stages run multiple times during the day, the Boddington Safari was a challenge for all of the competitors.

“We got a handy lead on the first two stages, but the roads really started to get cut-up on the second and third passes.

“We had to be a bit more cautious on the afternoon stages. It’s been so dry here, that through some of the paddocks it was difficult to tell where the side of the road was. The dust added to that, and it was a real issue on the final evening stage.

“But Toni was on her game again. Having such a good co-driver in the car makes a huge difference, and we were able to complete the stages without any incident.

“If anything, we may have been a bit too cautious with some of our notes. All of our experience has been in the Subaru, and there were sections of stages where we would have been quite cautious in the WRX. But the Skoda just drove over the top of anything put in its way.

“The Boddington Safari is always a great event. I’ve got to say a massive ‘thanks’ to the organisers, all of the officials and volunteers who work so hard to run such a great event, and Better Value Tyres who were the naming rights sponsor.

“We’re really lucky here in WA to have such great local support, and everyone worked together to put on a fantastic event.”

It’s now a quick freshen up for the Skoda R5 before being packed up for the trip east for Subaru Rally Tasmania.

“The Race Torque boys will prepare the car this week and it will then head over to Launceston. Toni and I will travel over the week before the rally to prepare for recce.

“If you look at the championship table in the ARC, we’re currently 7th, but we’re only 20 points away from fourth. It’s going to be an interesting event. Harry Bates and Molly Talyor will most likely be fighting it out for a victory.

“Luke Anear is in a brand-new Focus R5, but the step up from a production-based Subaru to an R5 car is a pretty big one. And I’m not sure if Darren Windus will be in Tasmania.

“So there are lots of unknowns with the crews ahead of me in the championship. What I do know is that I now have a lot more experience with the R5, and it’s the R5 and the team that won last year.

“So without wanting to sound too confident, I think if I can keep my nose clean and bank some decent stage times, there’s a good chance we can make up some ground in the overall championship.”

Out of context, but rally good fun