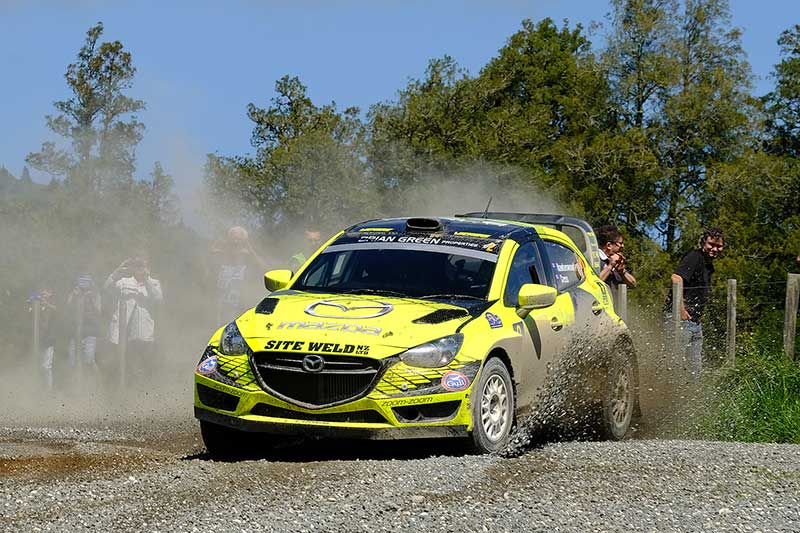 Auckland’s Andrew Hawkeswood has extended his lead in the Brian Green Property Group New Zealand Rally Championship after a challenging day saw him come home fourth at the penultimate round, the Handy Rentals Hamilton Rally Waitomo.

Hawkeswood headed to the event having made his way into the lead of the championship and looking to put a gap between himself and championship rival Matt Summerfield. He made the perfect start, able to survive a puncture late on the opening stage to still record the fastest time in the Mazda 2 AP4+ car.

A second puncture on stage two would be more costly as Hawkeswood dropped 30 seconds, but things became more difficult when he was forced to nurse an overheating engine through the 37 kilometre stage three.

With three long stages remaining, Hawkeswood and co-driver Jeff Cress were forced to manage the car for the remainder of the day. After surviving through stage four, Hawkeswood was able to record the fourth fastest time on stage five, which was the powerstage, earning him two crucial bonus points.

An impressive push through the final stage saw Hawkeswood take another stage win despite being forced to back off in the final quarter of the stage. The time was crucial, as it elevated Hawkeswood from sixth to fourth place, meaning he would secure 19 vital championship points.

“It was a pretty frustrating day for us really, once again we showed we had the pace to win the rally but niggling issues held us back. Having said that, everyone rallied together and we were able to really limit the damage,” said Hawkeswood. “Winning that last stage was quite a pleasant surprise, and pretty important to gain a couple more points. In the end, we’ve extended our championship lead and that’s what we wanted to do.”

Hawkeswood now holds a ten point lead in what has become a three-way fight for the title heading to the final round of the series, Rally New Zealand, on November 24-26.