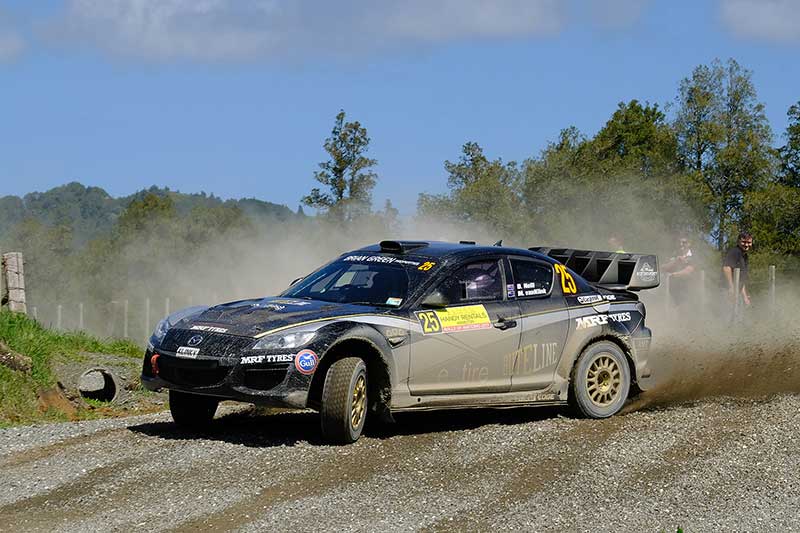 Christchurch’s Marcus van Klink has come away with the desired victory after a near faultless run at round five of the Brian Green Property Group New Zealand Rally Championship, the Handy Rentals Hamilton Rally Waitomo.

Having debuted the Buteline Mazda RX-8 triple-rotor late last year, van Klink has suffered from a series of niggling issues across the season, but development, including a quicker steering rack, saw the car not only reliable, but also easier to drive on some of the most challenging roads the championship has to offer.

After setting the second fastest time in the Open Two-wheel drive class on the opening stage, van Klink and co-driver Dave Neill shot into the lead on stage two and never relinquished it, coming home with a win of more than two and a half minutes.

The only moment in an otherwise faultless run saw a loose suspension arm on the final stage that caused a puncture, however some quick roadside repairs meant the pair were able to make the finish and claim their victory.

“The Mazda was fantastic this weekend, some of the changes we have made have transformed the car, especially the quicker steering rack, it really makes the car a pleasure to drive,” says van Klink. “It was great to have a relatively trouble-free run as well, it’s such an exciting car and we’re really starting to get on top of it.”

The Klink Rallysport team now turn their attention to the final round of the NZRC, Rally New Zealand, based out of Tauranga on November 24-26. Despite a tough season, van Klink still has a mathematical chance of taking out the Open Two-Wheel drive championship.