Asian drivers Gaurav Gill and Hiroki Arai have had a co-driver shuffle ahead of June’s Rally Italia Sardegna.

Gill will compete in a Ford Fiesta R5 on MRF Tyres’ debut in the championship, but with a new co-driver.

Australian Glenn Macneall will be back with Gill for the event, switching away from promising Japanese driver, Hiroki Arai.

Ineligible for the WRC2 championship, Gill and MacNeall will start behind the priority WRC crews and test the familiar Indian tyres on the world stage.

“I am really happy to be back with Gaurav. We respect each other and work well together,” Macneall said.

“He has shown his speed against quality opposition throughout his career, doing that all the while with very limited testing kilometres.

“This year we aren’t registered for WRC2 so the target is to gain experience of each of the four events that we will contest and collect data for the development of the tyres.

“I think this is the perfect platform to launch into WRC2 next year,” he added.

Macneall will compete in his 101st WRC event after celebrating his 100th WRC event last time out in Portugal.

Lehtinen co-drove for the likeable Mikko Hirvonen during his career, and worked with Toyota Gazoo Racing as sporting director up until Rally Deutschland last year.

His return to the co-driver’s seat will be his first WRC event since Rally GB in 2014.

Rally Italia Sardegna runs on the Italian island from June 7-10. 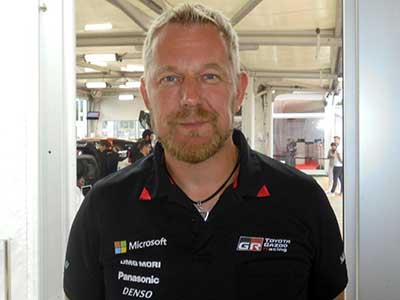 Jarmo Lehtinen during his time with Toyota Gazoo Racing.