Robbie McLean could be the late Possum Bourne’s biggest fan, and he now owns one of Bourne’s most iconic Subarus – the Impreza that won the 1994 FIA Asia Pacific Drivers’ and Manufacturers’ championships, and became Prodrive’s first-ever championship winning Impreza. From just 12 years old in 1980, Robbie  McLean was inspired by his hero and was lucky enough to know Possum in later years. Possum was a people’s champion, leaving his mark in people’s hearts where ever he went. The New Zealander’s career saw him win the 1991 NZ Rally Championship and become a three- time Asia Pacific Rally Champion and seven-time Australia Rally Champion. After success late in 1993, newly crowned Asia Pacific champion, Possum Bourne, eventually got his hands on an Impreza 555 not long after his great friend and co-driver, Rodger Freeth, was tragically killed in an accident at Rally Australia in 1993. 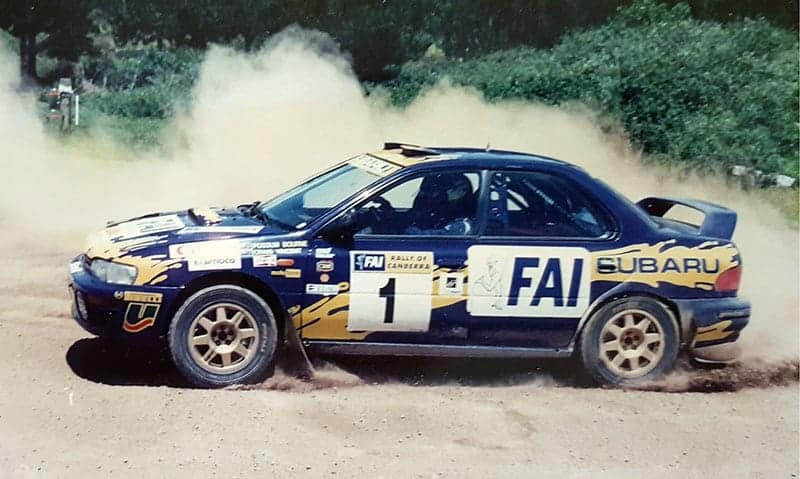 Possum Bourne in action in his Impreza 55 at the Rally of Canberra.

In May 1994 Possum and new co-driver, Tony Sircombe, spent a week testing in France with Spain’s Carlos Sainz and new team-mate, 22-year old Richard Burns. Driving  an Impreza with the registration number ‘L 555 STE’ (PRO 004), Bourne won his second Asia Pacific Rally Championship in 1994, with the Prodrive Subaru 555 team winning the Manufacturers’ title. This was also to be Subarus very first ever Impreza 555 Group A Manufacturers’ and Drivers’. 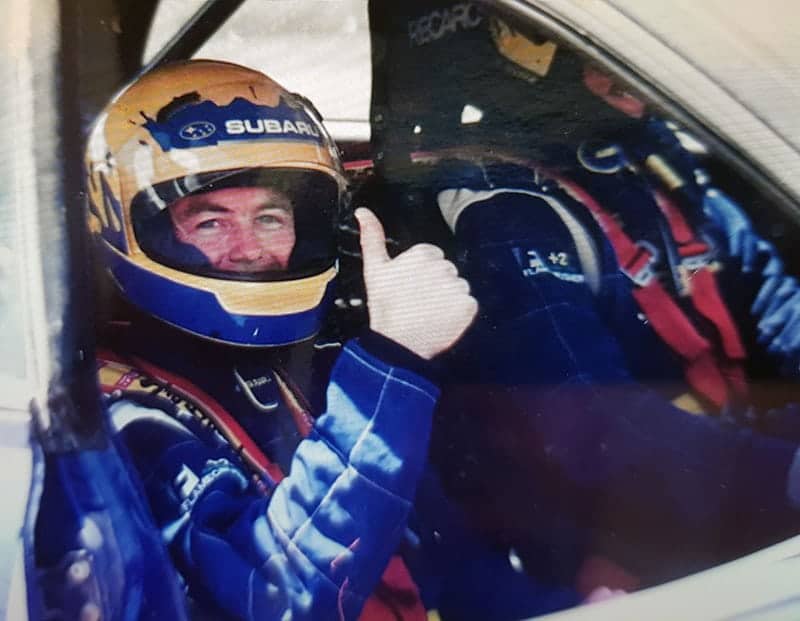 Robbie McLean rode with Possum Bourne in the car 22 years ago, in 1996.

Possum purchased the shell PRO 004 from Prodrive and it later became re-registered as “ROJ” (in recognition of Freeth), winning his first Australian Rally Championship title in 1996 after wins in both the Tasmanian and Canberra Rally.  The car’s current owner, Robbie McLean, was at this time building the Possum Bourne Motor Sport workshop and Possum invited him to take photos when the car arrived back in NZ. 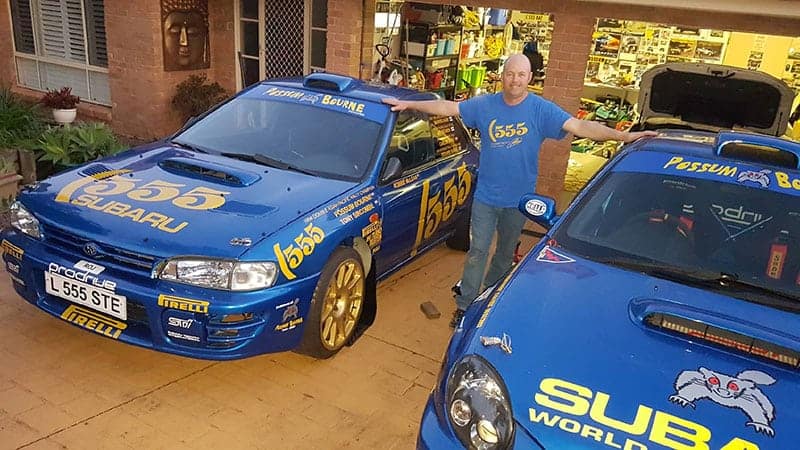 Richard Rowland and Robbie took ROJ to Maramarua Forest where Possum was taking close friends for a ride, including Robbie, who described that “the acceleration left my eyeballs in the back parcel shelf… What a weapon”.  Robbie cherished these memories with Possum and still has the photos in his collection. The Prodrive Impreza 004 was then sold to three-times New Zealand National Champion, Joe McAndrew, and in 2002 it was sold to Italy. 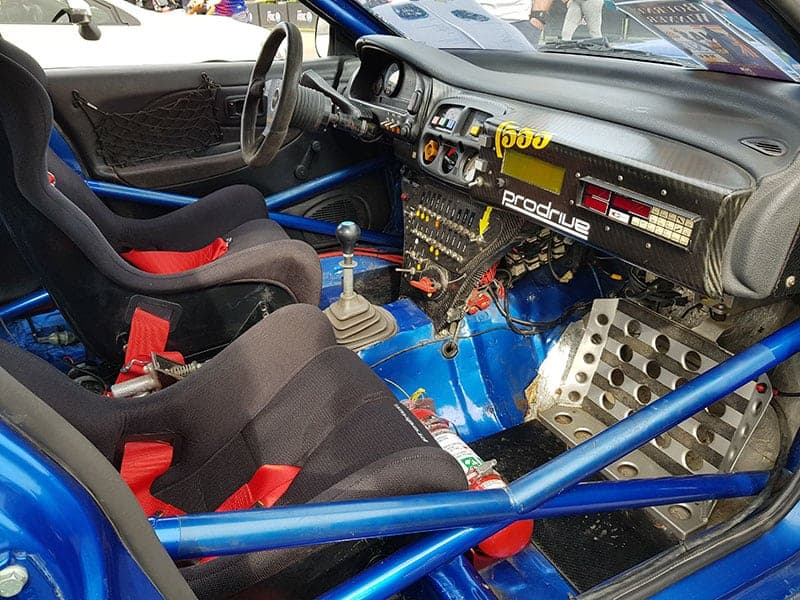 The ex-Bourne Impreza is steeped in history.

A friend from Australia, Jenna Kelly, contacted Robbie last year after seeing the former Possum car for sale in Italy.  Robbie flew to Italy for just a day and a half, took his Possum photos and information from 1996 to verify the car, and then flew home to convince his wife.  They used all their savings and mortgaged the house to purchase Possum’s car, in which the Kiwi had taken him for a blast 22 years ago. Robbie then contacted Prodrive in England when the car arrived to verify the chassis plate numbers.  “That is fantastic! Very well deserved – your car is a massive part of history (and) all those names associated with it makes it priceless. Keep hold of it mate, it’s unique, you must be very proud,” Prodrive said in a letter to Robbie. 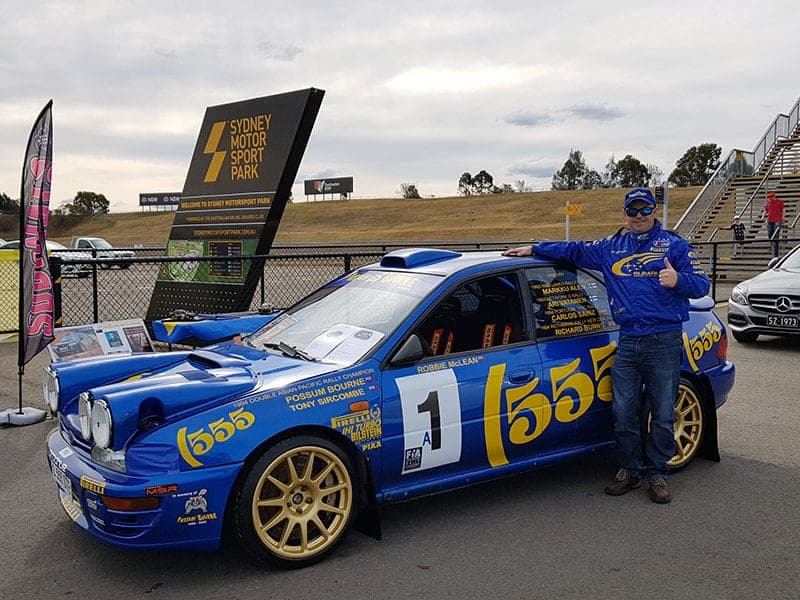 Robbie McLean with his Possum Bourne Impreza at the recent SubiNats in Sydney.

Robbie debuted Possum’s car at the recent SubiNats 2018 in Sydney, and naturally it created a lot of interest. This car is now 25 years old and too precious to race. In future it will be leased out for corporate displays. This ‘very early 1993 build’ Impreza is a high-end collectors’ car and a true museum piece. As Robbie McLean says, “Possum would be so proud”.