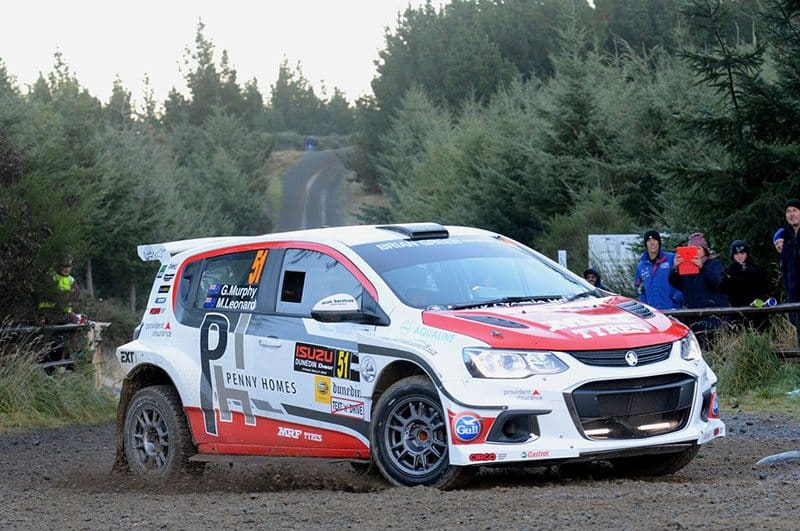 Greg Murphy had to call on a replacement co-driver for the Otago Rally. Photo: Euan Cameron

Josh Marston and co-driver Andrew Graves, from Christchurch and Gore respectively, put together a consistent performance to take a well-deserved fourth place at Rally Otago, the opening round of the 2018 New Zealand Rally Championship, over the weekend.

Penny Homes Holden Rally Team team-mate Greg Murphy, from Havelock North, also ran fairly consistently toward the front of the 65-strong NZRC field until an issue with the fuel feed to the engine of his Holden Barina AP4+ rally car forced him to retire early on Sunday afternoon.

“We had a good battle with Graham Featherston, who was in fifth place, and to just pip him at the end shows our pace is getting much better,” says Marston who held sixth or seventh place overall throughout much of the two-day, 17 special stage event before benefiting with a one-place improvement on his final placing due to Emma Gilmour dropping out of third place on the final stage.

“I’m really happy with how the car ran after the significant development the RDL Performance crew has put into it leading into this event. I didn’t quite get the most out it on Saturday, but changed a few things overnight and it was much better today. The car’s a lot different to drive with the new EXT suspension so that takes a little time to get used to. Improvements are going to come from more seat time for me and a little finetuning with the car now as we’re well in the window in terms of performance.

“There was fierce competition among those of us behind rally leader Hayden [Paddon]. Overall, I’m really happy with the car and feel we’ve made some good steps.”

Marston rates the Otago Rally special stages. “I really enjoy these stages, especially the ones north of Dunedin. They flow quite well and they’re fast. Our soft MRF tyre was a great option and we ran that all weekend.

“It’s also great to see Greg show some good pace through much of the weekend and I’m sure our guys will sort the fuel issue when he returns for Rally Canterbury in early June.”

While understandably disappointed not to finish the rally, Murphy is positive about much of the weekend’s performance, particularly his two fourth-fastest stage times on Sunday morning.

“It was a good morning today [Sunday] and I was somewhat surprised to see some of the times,” says Murphy. “That made me pretty pleased about the way I was driving the car. It confirms that the car feels good and it is good, rather than it feels good but it’s slow – as that can happen very easily. It was really positive to have both those things aligned, and to know the path you’re going on is right.”

Murphy’s Otago weekend started off with a bit of hiccup on Friday when his regular co-driver Mark Leonard, from Timaru, had to step out of the car before the rally commenced.

“After Mark and I did recce, he wasn’t confident of his throat lasting the distance,” Murph relates. “Mark made the hard decision to retire hurt. Fortunately Lisa Hudson was available when the car she was meant to be co-driving in for Brian Stokes wasn’t ready on time.

“Lisa did recce with Brian to practice their notes which meant she could step in as co-driver for me. Saturday was a little disjointed, but by Sunday Lisa and I were working seamlessly, so to not get through all the stages to the finish was particularly disappointing.”

Murphy says the fuel issue bought him crashing back down to earth.

“We lost power the stage prior and we realised it was struggling for fuel. It’s a systemic process to go through the systems to find the issue. With round two in Whangarei only three weeks, there’s less pressure on the team with me not being able to do Whangarei [due to Supercars’ commitments], so the focus is getting ready for Canterbury.”

Murphy also loved the Otago rally stages in his first run at this event in the Barina.

“Road conditions were amazing with the soft MRF tyre working really well. It was very durable and doing everything we needed it to do.

“I was rapt to see Josh having a great day with speed and consistency. I think he’s found the way he needs to drive the car and I hope more of the same will follow.”

Now fourth in the NZRC drivers’ championship standings, Marston, Graves and the team head to the International Rally of Whangarei on 5-6 May, while Murphy and Leonard will re-join the team at the one-day Canterbury Rally in June.