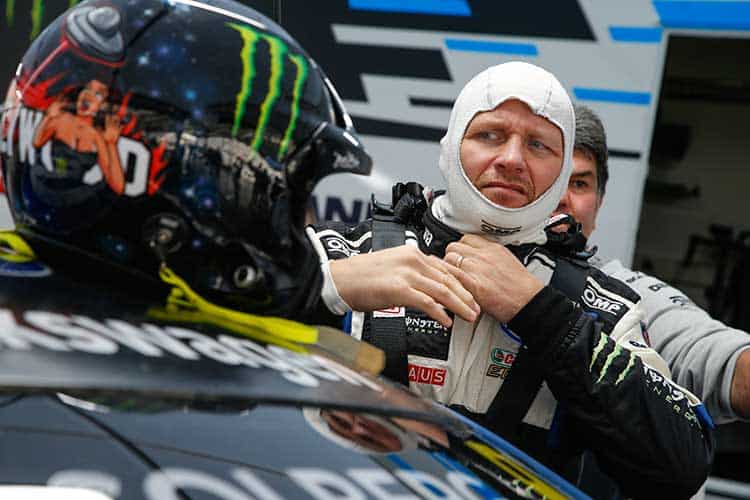 Not even Tinseltown could come up with a story like the one Hollywood delivered at World RX of Germany this weekend.

Six days ago (Monday September 25) Petter Solberg was in hospital undergoing surgery on a broken collarbone. There was nothing the surgeons could do about the two broken ribs he suffered at the same time when his PSRX Volkswagen World RX Team Sweden Polo GTI Supercar was hit at World RX of Latvia two weeks ago.

The decision to drive was Petter’s. Before the operation, nobody gave him a chance. Why would they? Ordinarily, a broken collarbone takes between six and 16 weeks to fix. How could Petter have his operated on and expect to be back in the car in five days?

Against all odds, Petter emerged from a wet, miserable and horribly tricky Saturday third in the standings. Even then, there were those that predicted that was as much as the two-time World Rallycross champ had to give.

Out of the rain came the Sunday sun and out of the sun came Solberg, fastest in Q3 and Q4.

Naturally, he won the semi-final as well and only lost the win after running wide at the first corner on the first two laps of the last race at Buxtehude.

Ultimately, the win would have been nice; it would have iced the cake. But even being in the kitchen to bake the cake was more than anybody expected. 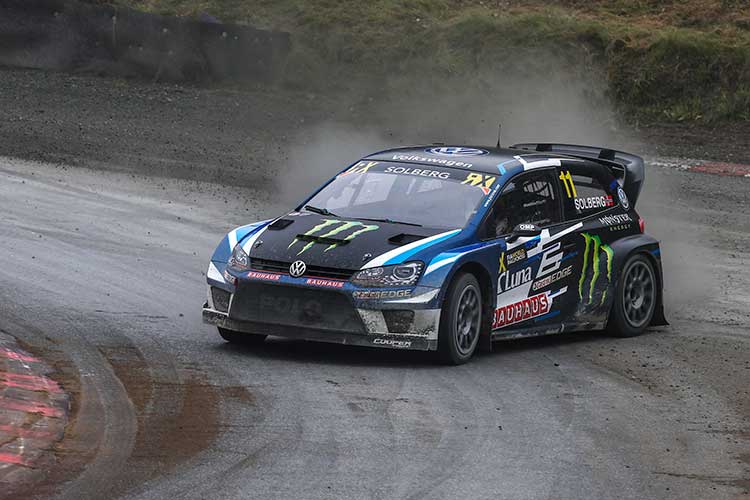 Solberg’s efforts went above and beyond what drivers – even at this elite level – are expected to deliver.

Tired and emotional at the finish, Petter said: “It was my decision to race. I was really low after the crash in Riga. I thought it might all be over. The pain was so bad, I knew straight away I had hurt myself and broken ribs. Honestly, I thought it was finished.

“After some time and talking to the medics and surgeons, I knew I could take the operation and then think about the race. My family and all the team around me, we stayed very quiet and thought a lot about what to do. I wanted to drive.

“I had to make a lot of preparation for this, we made some special armour to go under my overalls to keep the collarbone still. But all the time, I was a little bit scared, just waiting for the big bang and somebody to hit me from behind. I had a couple of nudges, but nothing big.

“The final was a shame, but I can’t think to that. I really wanted the win, the dream story, but actually what we have achieved, what I have done to come from the hospital to the track to race in the final is like a big, big win for me and for my family and the team.

“There were tears after Riga. I was so frustrated, to come back like this is incredible. If we made this like the film, the people wouldn’t watch it, they wouldn’t believe it.”

Just shows, you should always believe in Hollywood.

Johan Kristoffersson’s first event as FIA World Rallycross Champion couldn’t have been more different to the rest of his extraordinary season. The superstar Swede struggled to hook the Polo GTI Supercar up for a solid start in qualifying then lost out in a first-corner tussle in the semi-final.

“It wasn’t my weekend this time, but the incredible run had to end some time,” said Johan. “But, you know, I am still super-happy with my season, how can I not be? It’s been amazing and we still have one more race to come.

“This weekend belongs to Petter. He’s been a real hero to do what he’s done. I saw a little bit behind the scenes, what he put in and how hard he worked to just get to free practice – trust me, he really is the big hero!”

German rally star and long-time Volkswagen driver Dieter Depping made his World RX debut with the PSRX Volkswagen Sweden team at Buxtehude. He finished 16th after the qualifying rounds, just missing out on the semi-final cut.

Despite finishing his weekend earlier than he might have hoped, Dieter had enjoyed his time with the team.

Dieter said: “I have to thank the PSRX Volkswagen Sweden team for the help they’ve given me both ahead of the event and during the race meeting. The team and the Polo GTI Supercar are just brilliant.

“The actual racing was so intense, the feeling on the grid waiting for the lights to go green was incredible! I have really enjoyed the weekend and have even more respect for what Petter and our world champion Johan do now!”

Next time out … World RX of South Africa November 10-12
Starved of world-class FIA-sanctioned competition for far too long, World RX will put Africa back on the motorsport map this season. The Killarney International Raceway, north of Cape Town, is no stranger to icons of our sport.