Is Portugal ready for a taste of ‘Hollywood’?

Of course it is. Round one of the newly created FIA World Rallycross Championship takes place in northern Portugal this weekend, at the Montalegre circuit, where a new era for both the sport and Petter ‘Hollywood’ Solberg is about to begin.

The 2003 World Rally Champion has a brand new Citroen DS3 Supercar and a brand new look for this season, as well as a new team mate in the form of Alexander Hvaal, driving Petter’s 2013 car.

“As we used to say a lot when I was rallying, the new car is definitely an evolution rather than a revolution,” points out Petter. “But I know it’s going to be fast. If I compare where we are now with where we were at this point last year, it’s absolutely a night and day difference. In fact, looking back at it, there’s no way we really should have started the season last year. But we did and we were fast. So I’m hoping that this year can be even better.” 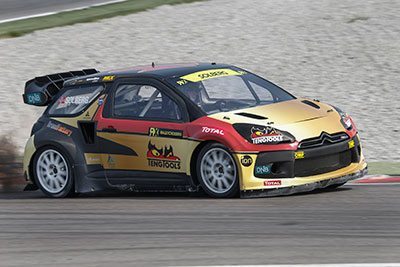 Last season – which was his first full year in rallycross since 1996 – Petter won 16 heats: that’s 30% of the total number held. Having ironed out the teething troubles that affected the all-new team last year, Petter is aiming for the title in 2014.

“The opposition is huge this year; as big as it has ever been in my career and perhaps bigger, but I wouldn’t be here unless I thought we had a chance to win,” explains Petter. “I’m totally focussed on that: to the point that I actually moved myself and my family into the workshop – we sleep there – in order to spend more time getting the car exactly right.”

No driver is as committed to success and to his worldwide fan base as ‘Hollywood’. Expect more of his trademark antics this year, including celebration laps where the car seemingly drives itself: with Petter out on the roof.

“I’m really pleased that we’re starting this exciting new season in Portugal, because the Portuguese fans are absolutely legendary,” adds Petter. “Our aim is to go flat-out and to give them something to remember. With all the increased investment in rallycross, and the great efforts from IMG, I’m sure it’s going to be a brilliant show. And the really exciting part is that this is just the start: there’s so much more to come.”

The Montalegre circuit is located in the extreme north of Portugal, right up on the border with Spain. It contains a fast straight, with some tighter sections as well, and it is one of the quickest circuits of the year. However, it’s located at high altitude in the Vila Real mountains, which can sap the car’s engines of power: an important factor to bear in mind when preparing the set-up.

The PSRX team has had a busy few weeks: after preparing the cars in Sweden, they travelled to Franciacorta in Italy for the global media launch. Following that, the team had a two-day test at Loheac in northern France, before the long drive down to Portugal.

Petter’s new team mate this year, Alex Hvaal, is hoping to carry his winning form of last year through to the 2014 season as part of the awesome PSRX line-up. “This is an amazing opportunity that I’ve been given,” he added. “There’s a lot I can learn from Petter but also a big responsibility: of course there are no team orders, and Petter was very clear on that, but we also have to work as a team to fight for the teams’ championship – which is another big objective that we have for this season.”

Rallycross has been described as the fastest-growing form of motorsport in the world. This weekend in Portugal everyone finds out why: in inimitable ‘Hollywood’ style.