Sean Keating will enter next weekend’s Quit Forest Rally in his Nissan Silvia aiming to be the fastest West Australian in the two-wheel drive category, with eyes squarely set on his archrival Razvan Vlad.

“I’m more than happy to finish second last in the ARC, just as long as Raz is last!” laughed Keating. 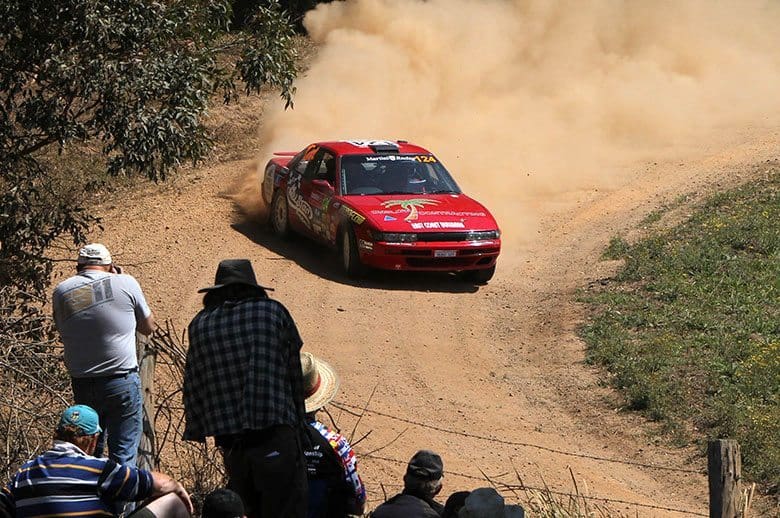 The two-wheel drive rivalry between Keating’s rear-drive Nissan and Vlad’s front-drive Ford Fiesta has grown over the past two years in the West Australian Rally Championship, where the two regularly swap stage times and give the more powerful Mitsubishi’s and Subaru’s a hurry up.

“My main competitor is always Raz, so when entries were closing for the Forest Rally I rang him to see which category he’d be entering into. He said he was going to do the WARC, but I wanted to do the ARC, so I guess I talked him into coming up and ensuring we ran against each other,” explained Sean.

Keating runs the All Star Garage, a performance tuning shop in Perth, with former ARC regular Nick Box. He explained that rear-wheel drive had always been his forte and that while his Nissan Silvia wasn’t expected to be a threat to the front running two-wheel drives he was happy to measure his pace.

“It’s good to be running a bit higher up the field by entering the ARC, you certainly get a better road position. I’ve always driven rear-wheel drive cars, they might not be as fast but they are definitely a lot more fun!”

“My only goal is to beat Raz, but if a couple of the ARC cars are only a couple of seconds ahead of me I’ll definitely push on and see if we can knock them off,” Keating added.

“I’ve only been in the sport a short while, and even though I’ve only done one ARC before I just can’t wait to get the shiny red Nissan Silvia out on the dirt. I’m aiming to bring it back a fair bit dustier, but hopefully with no dents either.”

“As a rally driver I think your primary aim is always to bring a car home again on all four wheels!”