In a rally where nothing spectacularly unusual or unexpected happened, it is necessary to look around and see what happened that was quite out of form.  Of these, there were two such occasions.

Hayden Paddon made changes to his driving style throughout the event.Firstly Ott Tanak.  Right up to the finish, the DMack driver was off the pace, never in the fastest eight places on a stage, until the final stage on the Saturday.  Suddenly his time was the fourth fastest on the rally.

With the exception of the missing Meeke, all the other top drivers were still running strongly.  In time gone by, wise minds in the service park and the media centre would nod and talk about timing errors, but things have now moved on.  Split times nowadays can discount this, or the suggestions of taking a short cut, or dramatically jumping the start.

Tanak really did make his fourth time.  It was all to do with the weather!  His face, looking ever more depressed after every stage till then, lit up.

Talking about the rain now on the road, he said: “The effect of the water cooling on the tyres was good. On this stage there was no drop-off any more.”

That curious stage time was correct.  The other occasion was the performance of Hayden Paddon, who suddenly made second fastest time on the penultimate stage of the rally, not having been higher than fifth on the previous two days.

The evening before an equally frustrated New Zealander was talking about going “back to the drawing board”, and had been driven to changing his driving style.

“I was trying something completely different with the set-up to make it more aggressive – more like my normal driving style.  It wasn’t always effective, but I was more comfortable.”

Once again, it wasn’t a timing error … 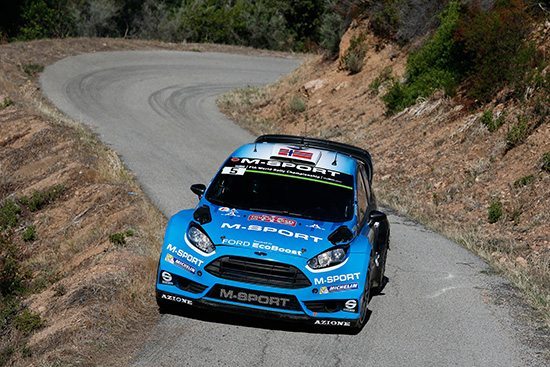 Mads Ostberg's 100th WRC event wasn't a memorable one for the Norwegian.In between adapting himself to constant brake cooling problems during the event, Mads Ostberg experimented with changes to his asphalt rally driving style.

After stage six he gave rally radio interviewer, Emyr Penlan, his on-event thoughts, when he had the chance to focus on the driving.

“Basically I am a gravel driver and I’ve had some improvement on tarmac over the years, but I’ve never got to where I want.  I needed to start a project to learn tarmac properly.

“There is no time outside WRC, so I need to do this on WRC events themselves.  That is not ideal, but I have to take the time to learn.

“I will definitely lose time on this rally because I’m trying things I know is not working, but I’m doing it to learn it.  The biggest change in my technique is probably the actual lines,”

It started well, best Ford driver on the long first stage, but later the brake trouble came along.