European Rally Champion, Jan Kopecky, has taken the lead in the 2014 Asia-Pacific Rally Championship after a dominant victory in the International Rally of Queensland.

While the predicted wet conditions in Queensland didn’t really materialise, the tricky stages on the Sunshine Coast were still a challenge for Kopecky and co-driver, Pavel Dresler, who were contesting the event for the first time.

Their victory was their second in succession after winning the recent Rally of New Caledonia, while team-mates Gill and Glenn Macneall won the season opener in New Zealand.

“We had some interesting experience with some cows (on the road) here on this rally - that was not so nice - but the stages were good and the organisation was good.

“It’s tricky here, because again recce was fully dry, fully dusty and we had some rain showers during the night which made some places really slippy. But we’re happy to win this rally on our first try.”

In addition to his rally win, Kopecký also wrapped up the Pacific Cup title, contested over the three rounds held in New Zealand, New Caledonia and Australia.

For Gill, his retirement was particularly disappointing, as he looked on track for his second win of the year.

He led the rally by 27.4 seconds after just three stages, but on the fourth stage he clipped a rock on the inside of a slow, second gear corner, and broke the Skoda’s steering. The car veered off the road, rolling down an embankment and doing significant damage.

Both Gill and Macneall were uninjured, although the same couldn’t be said for the car.

Team MRF boss, Lane Heenan, said that the Rally of Queensland provided the team with highs and lows.

“To win the event with Jan was fantastic, and it again showed that he’s clearly capable of winning first time out on new events.

“He drove brilliantly and thoroughly deserved the win.

“Gaurav was unlucky that a small mistake cost him dearly. Fortunately the strength of the car protected both he and Glenn from injury, but after we assessed the damage it was decided that they couldn’t re-join the event on day two.

“But he’ll bounce back strongly in Malaysia. There’s still three events to go, and both drivers will still fancy their chances,” Heenan said. 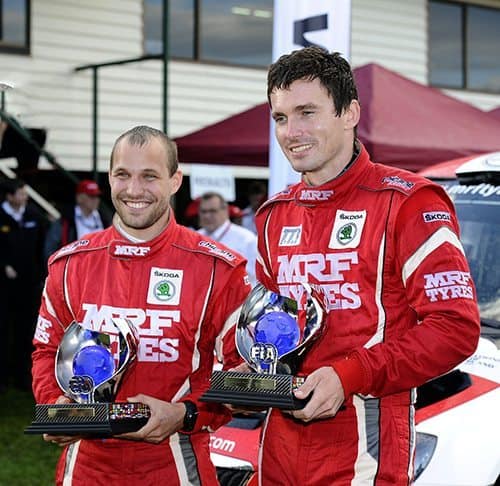 Jan Kopecky (right) and Pavel Dresler celebrate their win in the International Rally of Queensland.Kopecky’s victory has put him a commanding 39 points clear in the FIA Asia-Pacific Rally Championship with three events still remaining. Gill remains second, but is just four points clear of Mark Pedder, who took second place in Queensland.

The next round of the APRC is the Rally of Malaysia in August, before the remaining events in Japan and China.