Finnish star Esapekka Lappi has made it two wins from three starts in this year’s all-action FIA European Rally Championship with a dominant victory on the Discover Northern Ireland Circuit of Ireland Rally, which finished in Belfast’s sun-drenched Titanic Quarter this evening.

Cheered on by thousands of fans enjoying the Easter weekend break, Lappi led from start to finish and becomes the third different driver from Finland to win the legendary asphalt event. By joining Pentti Airikkala and Juho Hänninen as a Circuit winner, Lappi moves back in front of the ERC title battle after erstwhile leader, Irishman Craig Breen, retired his Peugeot 208T16 on Saturday’s opening stage with a sensor problem. 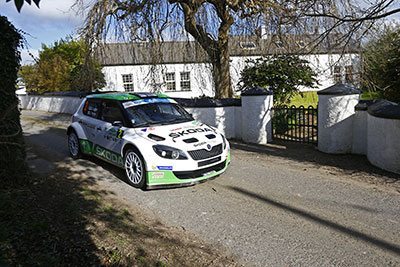 Not only does Lappi, who was co-driven by compatriot Janne Ferm, top the ERC standings after four rounds, by winning 10 of the 18 Tarmac stages, Lappi now heads the ERC Asphalt Master classification, a new initiative for 2014 designed to reward the achievements of surface specialists.

While Breen was out of luck on his home round of the ERC, there was plenty of cause for Irish celebration when Josh Moffett and Daniel McKenna won the ERC Production Car and ERC 2WD categories respectively. Chris Ingram had been the leading ERC Junior runner but suffered a heavy crash on stage 13, fortunately without injury to neither he nor co-driver Gabin Moreau. With Ingram out, Jan Černý came through for his second successive victory in the new-for-2014 series, which once again produced some serious competition.

Lappi, who is now a four-time winner in the ERC, began Saturday’s leg with an advantage of 12.6s over Breen and all-set for a close fight for victory. But when the Peugeot Rally Academy driver stopped on the Bulls Brook stage, Lappi was left in the clear to take a second Circuit win for his Michelin-equipped ŠKODA Motorsport team following Hänninen’s success for the make in 2012.

“It was quite a crazy weekend I have to say,” said Lappi. “I am proud of yesterday with my speed against the local guys and we kept this performance today. Yesterday was perfect, today was more or less surviving to the finish after Craig stopped and the fight ended. This was my first proper win on Tarmac and it’s my best win. It’s very good for the championship so I am happy.”

Breen, the winner of the previous round in Greece, said: “Obviously I am bitterly disappointed to have retired on this event so close to home, especially after Scott [Martin] and I managed to narrow the gap to Lappi from 20 to 12 seconds on Friday. That made chasing victory a real possibility. My car had the speed and we had a good fight but things can happen with a new car.”

Behind Lappi, Robert Barrable was on course for the runner-up spot in his Ford Fiesta R5 but an overshoot into a field on the penultimate stage elevated Lappi’s German team-mate Sepp Wiegand into second with Irishman Barrable settling for third. His countryman, Sam Moffett, had been in the mix for a podium only for a fuel pressure issue to force his exit after stage 12. Moffett, who hopes to make further ERC starts, was fastest of all on Saturday’s opening stage in his Fiesta RRC.

ERC Production Car Cup: Moffett scores comfortable win
Josh Moffett scored a clear victory, coming home more than seven minutes in front of Robert Woodside, who was making his return to competition after a 12-year absence. While Woodside lost time on a tough second stage this morning with myriad problems, Moffett pulled clear although he did admit to dropping his pace on the closing three stages when his brake discs warped. “It’s a great result and we’re really happy,” said the 24-year-old Irishman. “We backed off on the last three stages because of the brakes but it was only a distraction, not a serious problem.”

ERC 2WD Championship: McKenna makes his mark
Daniel McKenna was using the Circuit of Ireland Rally to prepare for his upcoming British championship campaign as the Pirelli Star Driver scholarship recipient. But he claimed an impressive debut ERC 2WD win in sixth overall following a faultless display in his Citroën DS3 R3T. ERC Junior winner Jan Černý took second with Jonathan Greer third and reigning ERC 2WD champion Zoltán Bessenyey fourth in his Honda Civic Type R having completed leg one in sixth position. “I wasn’t comfortable in the car when I tested on Monday but everything hooked up nicely after the first few corners and everything worked well from there,” said McKenna. “But I never thought I would be on Jukka Korhonen’s pace. To be beating him and then holding him off before he had his accident I was delighted. But even today we found some more speed.”

ERC Junior Championship: Černý does the double as Ingram shines
Jan Černý made it back-to-back ERC Junior wins but not before Chris Ingram had shone in his Renault Twingo. Ingram, the overnight leader, was still in front when he crashed heavily on stage 13, fortunately without injury to him nor co-driver Gabin Moreau. With Ingram out, Černý steered his Peugeot 208 to victory ahead of impressive ERC Junior newcomer Alex Parpottas. Petter Kristiansen fought back to grab third on the penultimate stage when Stephen Wright overshot a left-hander and suffered a delay selecting reverse gear. Aleks Zawada recovered from a puncture to take fifth with Gino Bux a strong sixth on his first international rally. “It’s good, I’m really happy we are again winning,” said Černý. “Before the rally we really wanted to win here and it happened but we are sorry for Chris that it ended up like it did for him.” Ingram’s efforts earned him the prestigious Colin McRae ERC Flat Out Trophy, which was presented to him by Kris Meeke.