Latvala won Thursday afternoon's wet first two stages, shared the SS3 stage win with Ogier as they set identical times and then lost eight tenths of a second to his rival when he had a brush with a hay bale on the city-based Harju stage that finished the day.

That left Latvala 4.5s ahead of Ogier going into Friday's nine-stage itinerary.

Citroen's Kris Meeke is the only man able to keep VW's lead duo in sight so far, completing the evening just 4s behind Ogier after a very encouraging start to the first of the three rallies that will determine whether he gets a 2015 deal.

Juho Hanninen was right with Meeke initially as he made a superb start to his home rally for Hyundai. But the Finn lost ground in the ruts that developed for those further down the start order on the repeat run of the Lankamaa stage and dropped behind Mikko Hirvonen to fifth by the end of the day.

Just 0.8s covers Hirvonen, Hanninen and a cautious Andreas Mikkelsen in fourth to sixth places, with Mads Ostberg right behind them. Hirvonen and Ostberg in particular were frustrated with their Thursday performances and to have fallen half a minute adrift of the lead already.

Thierry Neuville is not far away from this group in the second Hyundai, despite feeling his pace notes were far too cautious initially. Robert Kubica is setting consistent stage times in ninth on his first attempt at Finland in a top-class car.

Two other members of the M-Sport stable have already hit trouble. Henning Solberg fell from eighth to 12th when he punctured a tyre on a rock on SS3, while WRC returnee Jarkko Nikara crashed out of 11th place on the same stage. 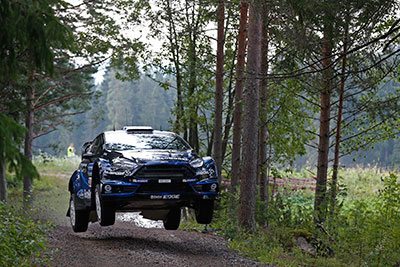