Mac to make it 22 straight at Targa Tasmania

Targa Tasmania will be held for the 23rd consecutive time this year, and one man from the state’s north west, Mac Russell, has done all but one of them.

On Tuesday May 4, Mac will line up at the George Town prologue for his 22nd consecutive attempt at the six-day tarmac rally, having only missed the inaugural event in 1992.

It’s probably no surprise either that the company director from Devonport has been inducted into the Targa Tasmania Hall of Fame, along with his trusty 1976 Morgan Plus-8.

Mac first got the Targa bug when he and business partner Neville Smith raced in the 1993 event.

Neville was also a keen rev-head and they took it in turns to drive or navigate for each other in Mac’s Morgan or Neville’s 1967 Holden HR X2.

“It became fairly obvious by 1997 that we both wanted to drive, so we split the team in two,” Mac explained. 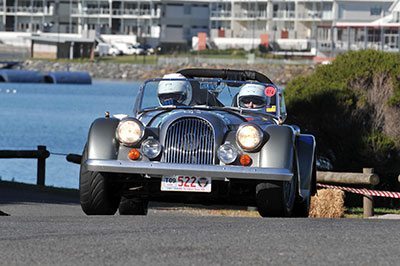 Neville took his wife Lorraine on board as a navigator, while Mac was joined for two years by the late John Palmer, also a keen Targa competitor, before Mac’s wife Marjory slipped into the navigator’s role.

She has been by his side ever since, and will herself become eligible for induction into the Targa Hall of Fame this year as well.

Since he drove in his first Targa event, Mac has acquired two more Morgans, two Lexus’ and a BMW Z4M – any of which would be suitable as Targa cars.

Despite having a garage full of potential Targa cars, he has stuck with his reliable 1976 Plus-8.

“I just love doing these types of events in this car – it’s just made for this type of driving,” Mac said.

In addition to Targa Tasmania, Mac and Marjory have also raced in four of the five Targa Wrest Point events held to date, plus twice in Targa Adelaide and three times in Targa High Country (Vic.), but Targa Tasmania is still the ultimate.

“There’s no question it’s the best rally of its type in the world,” Mac said.

“The roads are brilliant and there’s plenty of variety with no two stages the same, plus the size and population of Tasmania, makes it a great event to stage,” he said.

“You could imagine what a logistical nightmare it would be to stage something similar in Europe for example.”

Mac has only failed to finish two of his 21 Targa Tasmania events to date – both times out on the final day of competition.

The first was in 1998 when the engine on the Morgan expired on the demanding Mount Arrowsmith stage. The second was last year.

The Morgan again wore out an engine – this time at Strahan on Day Four - but Mac was able to arrange a replacement overnight and continued on.

At the time he was leading his category, Targa Florio, but disaster struck on the second-last stage of the event on the way into Hobart, during the Woodsdale stage, when the car broke a stub axle.

“That was pretty disappointing and the car’s undergone a major re-build over the past 12 months,” Mac said.

“We ran it in Targa Wrest Point in January and we’re glad we did, because we found a few minor problems which could have become major problems in Targa Tasmania,” he said.

Mac has won his category in Targa Tasmania Classic three times previously, but in recent years has been competing in the less demanding Targa Florio section.

“The racing’s just as hard, but I quite like the idea of a day off at Strahan in the middle of the event,” he said.

“Plus, it’s also less demanding on the older cars like mine.”

After the disappointment of not finishing last year, while leading Targa Florio and finishing second in 2012 behind fellow Devonport driver Drew Kent, Mac’s not getting too far ahead of himself this year.

“Drew will be our main competition again this year,” is all Mac would say for fear of jinxing his chances.

Targa Tasmania finishes at Wrest Point in Hobart on Sunday May 11.