The final round of the 2014 Hankook Tyres Queensland Rally Championship has been won by Mattt Van Tuinen and navigator Erin Kelly. The much anticipated championship battle with Ian Menzies and Robert McGowan went down to the wire. Both drivers won six stages each with Van Tuinen’s winning margin a meagre twelve seconds.

Matt Van Tuinen beat home rival Ian Menzies by just 12 seconds after an event-long battle.The KCF Rallysport Forest Finale Rally was run through the tight and twisting roads of the beautiful Imbil State Forest. It was a ‘blind’ event run over 120 kilometres of competitive stages, including four night stages, providing a feast of rallying action for competitors and spectators alike.

With official temperatures in South East Queensland soaring to around 38 degrees, the conditions were extreme for drivers, teams, officials and spectators. The heat was not only the main talking point on the day but was also a major issue affecting cars. With a field of forty-three cars starting the event, only nineteen managed to complete all twelve stages. Quite a number of vehicles succumbed to overheating problems, as did a couple of the teams. One can only imagine the temperatures inside the cars. 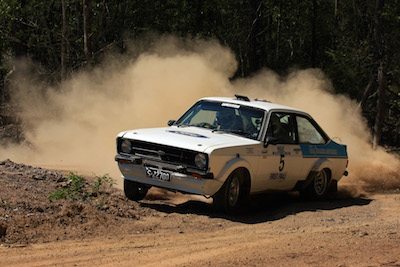 Phil Casper finished third outright and took victory in the Historics class in his 1975 Ford Escort.In the popular Historics class, Phil Casper and Christopher Hamilton in their 1975 Ford Escort, took out the win and also finished on the podium in third place overall. In second place were Dave Gaines and Nikki Doyle in the 1975 Datsun 240K GT with Michael Guest and Trina Thompson in a Toyota Corolla coming home in third place in class. Something must be said for the strength and reliability of some of these old cars, with three them in the top ten finishers.

Class P3 saw a resounding win to Marco Jansen and Cameron McIntosh in the awesome looking VW Polo, over Tim and Debbie Dillon in a Hyundai Lantra.

Rally organisers, the Brisbane Sporting Car Club, were very pleased with the rollout for the final event of the year, justifying all the hard work that has gone into preparing for these events. A big thank you must go to Keith Fackrell at KCF Rallysport for the sponsorship of this event.

With the dust settling in the forests, teams can now head home for a well-earned rest, review the season that has just ended and begin preparations for an assault on the 2015 season.