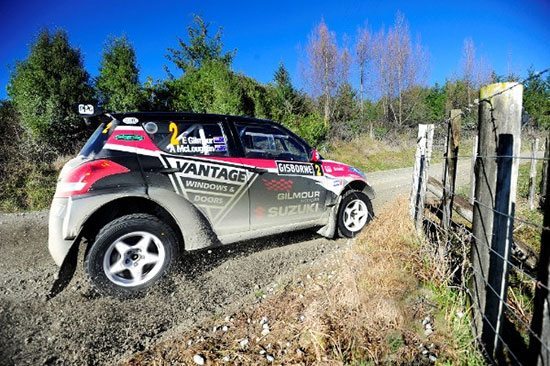 The hashtags said it all in Emma Gilmour’s post-Rally Gisborne Facebook post, after she was forced to retire early in the day with engine failure.

“I’m very disappointed to say the least. After our win at Canterbury, we were really hoping to battle with David Holder for the championship today. Unfortunately that all came to an end on stage three when our engine stopped,” Emma says.

The end of Emma and co-driver Anthony McLoughlin’s event, ironically came just as the day was starting to go well for them. The first two stages saw them eighth and then third respectively, as they changed the Vantage Windows and Doors Suzuki Swift’s set-up to give them the best approach for the morning’s icy stages.

“We are continually tweaking the suspension set-up to try and improve the handling but we went the wrong way before the first two stages. After the first service we put it back to Canterbury set-up and it was going really well,” Emma says.

Her team will need to pull the Suzuki’s 1600cc engine apart to determine exactly what went wrong but the damage has already been done to her 2016 season.

“Congratulations to David Holder and Jason Farmer on securing the 2016 NZRC title today. We will now shift our focus to the last event of the season and securing runner-up in the championship,” Emma says.