Mick Harding wins Snowy River in a battle of the tyres

Fog was blanketing the beautiful township of Buchan, in East Gippsland Victoria, as crews arrived for the Snowy River Sprint, the penultimate round of the 2018 AASA Australian Tarmac Rally Championships.

With Danny Traverso and Co-Driver Jason Page holding a narrow lead in the Championship, they were hoping for a good result, to cement their grip on the title before the final round, The Great Tarmac Rally (GTR), which is to be held at Marysville in Victoria over the weekend of 13 and 14 October.

The fog lifted as competitors prepared to head into the first Special Stage, a section that proved more than a little eventful for some competitors.

Outright contenders, Andrew Richmond and Chris Thompson in their 2017 Lotus Exige 350S, found themselves, not far from the start, parked in a farmer’s paddock and were out of the event.

An under-bonnet fire in the WRX of Stephen O’Neill and Co-driver Chris Sciretta, also shut down the stage, as fire crews responded to the incident. The team however, were able to repair the car and rejoin the rally, albeit now out of contention.

Stage One had yet another trick to play, with the 1981 Commodore of Michael Reynolds and Dirk Witteveen going on strike before the start line when it broke a tail shaft.

It would be the 600-horse power American muscle cars who would dominate the first stage, sending a warning shot across the bow of the other competitors. Not only were they better looking than the aging Mitsubishi Evos and WRXs; they were out to prove they were faster too.

By the end of the first few stages, it was the 2016 Dodge Viper ACR, crewed by John Ireland and Janet Binns, who were setting the pace with a one second lead over the 2015 Shelby GT Mustang, piloted by Craig Dean and Mary Hughes. The quickest of the 4WDs was the Audi TT RS pairing of Barrie Smith and Russell Hannah, just edging out the Championship leader, Danny Traverso in his Evo.

In the Classic competition, the father and son combination of Keith and Alex Morling, were setting up a comfortable lead over second placed Mark Clair and Lee Harper in their 1974 Porsche 911 RS. 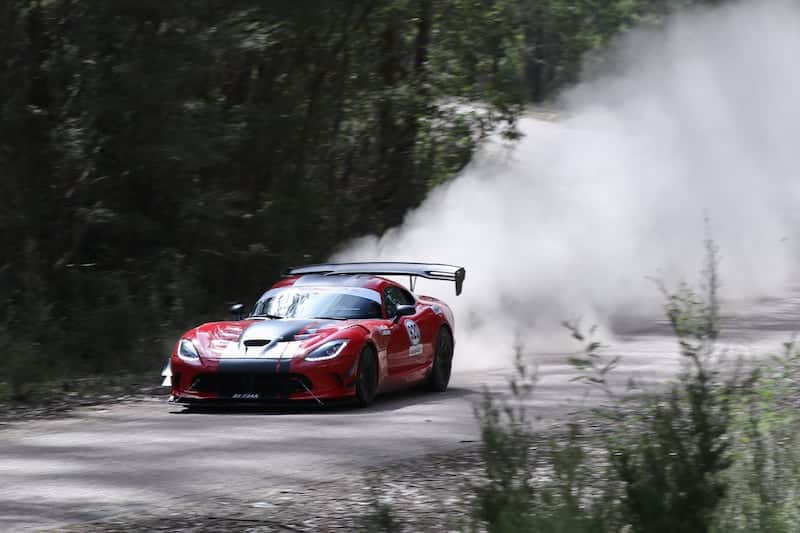 As crews headed to the morning service park, before joining the locals in the main street of Buchan for lunch, it was tyre’s that were on everybody’s mind.  Wear and choice could determine the event.

During servicing, two of the lead crews, Craig Dean and Danny Traverso made re-fuelling faux pas, the Mustang leaving service 5 litres short, causing Craig to ease off so he could finish the day without running out of petrol.

Danny Traverso’s team, picked up the wrong jerry cans and filled his car with 96 octane fuel instead of the E-85 it uses.  But, it wouldn’t be fuel that would haunt the Mustang and Evo.

By the end of the first day, the placings at the front remained unchanged, with the Dodge Viper leading the GT Mustang.  Danny Traverso had nudged up into third and Mick Harding, in his brand new WRX, secured fourth. The two Audis had dropped back to be seventh and eighth, but were leading the showroom 4WD class. In Classics, Keith Morling's Escort had a commanding three-minute lead over second placed Mark Clair in his Porsche.

Over what had been a long day of rallying, the huge horse power combined with the demanding roads, was causing tyre dilemmas for all of the muscle cars.

The tyre problems however, were not restricted to the 600 horse power beasts. Other cars, like the 1971 Datsun 240z driven by Robin and Peter Lowe, was laminating its shoes. For the first time, the unstoppable Dodge Viper was showing its Achille’s Heal, and with no spare tyre’s in stock, trouble was brewing.

As crews headed back to Lakes Entrance and the Saturday night dinner function, the conversation in the 4WD camp was, how and whether they could close the gap to the Viper.  Would tyres come into play and with rain forecast for Sunday morning? Would that tip the balance towards the traditional rally cars? 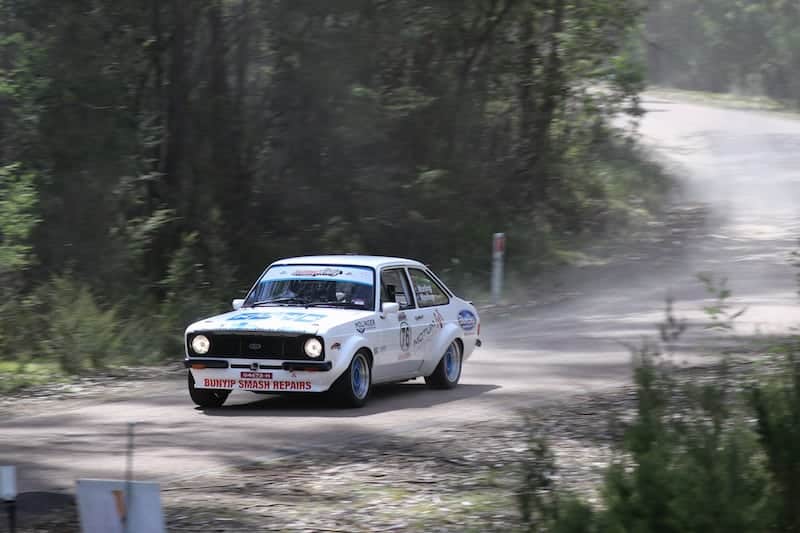 Keith Morling blasts his Escort down one of the Snowy River Sprint stages.

Competitors woke to drizzling rain. Special Stage 14, the first for Sunday morning was wet and slippery. In these difficult conditions everyone expected the 4WDs to dominate.

The Viper, having exhausted its tyres on Saturday, withdrew from the event leaving Craig Dean and his Mustang and Ben Manion and Andrew Clingeleffer in Corvettes, flying the flag for the American muscle cars. In another sign of things to come, Championship leader, Danny Traverso didn’t have a set of soft compound tyres he could put on for the wet conditions.

As day two got underway, it was a masterful display of driving, as Craig Dean wrestled his Mustang for a third outright on Special Stage 14 and then a second on Stage 15.

Mick Harding however, was now nibbling into his lead, but with the roads drying, the event would come down to the last couple of stages; that was until Stage 16. A couple of kilometres in, the Mustang broke its tail shaft and was out.

Meanwhile, larger than life competitors, Stephen O’Neill and Chris Sciretta, in the WRX that caught fire in Stage One, had a gentle roll-over in Stage 18.

And, remember the Reynolds’ Commodore, the one which broke its tail shaft? Well, when they finally got it fixed, they gained permission to run with the tour cars. But not for long. The car obviously didn’t want to play, fouled its plugs – and they were out for a second time.

Toni Conrad, driving a 2009 V8 Commodore SS, is currently the only female driver in the ATRC series although there are many woman co-drivers. She and co-driver, Kim Bessell mastered the wet conditions on Sunday and finished the event second in Showroom 2WD.

After two days and almost 300 kms of competitive stages, it was the Canberra crew of Mick Harding and co-driver Adam Kudra in their TechWorkz Automotive Subaru WRX who would prevail, taking a well-earned win from second placed Danny Traverso and Jason Page. Third went to Guy Lilleyman in another Evo.

Snowy River was Mick Harding’s fourth ever tarmac event but he is no novice to the sport, having been NSW Rally Champion in 2013 and winner of the 4WD class of ‘Rally Canberra’, a round of the Australian Rally Championships. ‘I think gravel rallying is the ideal transition to tarmac racing', said Mick Harding. 'What I really enjoy about the ATRC is the technical and precise nature of the driving, because of the roads they use.

‘I’m now looking forward to the final round of the championship, the GTR, but with such high-quality teams competing in the series, and with double points on offer, I will need a win if I am to have any chance of securing the championship. You know, any number of the crews and cars are potential outright contenders; the high-quality field runs deep into the entry list. But there is one thing to be sure of, I will be trying.’

The event’s embedded reporters, Mark and Lacy Biggs in their 2000 WRX, won the SuperSport section and now lead the Championship. 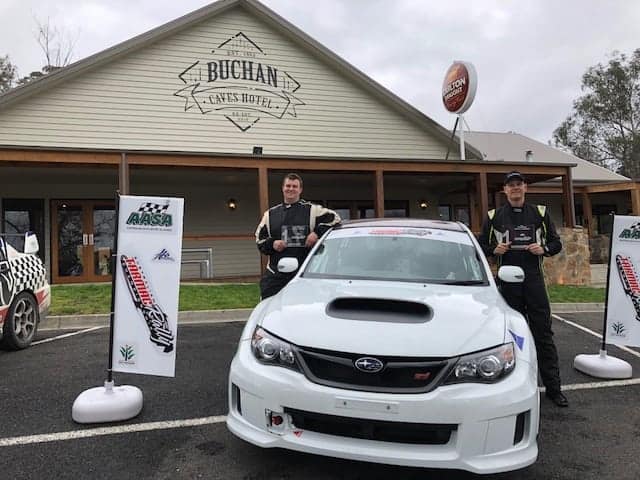 Although competitors consider these roads amongst, if not the best tarmac stages in Australia, reminiscent of the iconic European tarmac rallies, it is the most exacting and demanding of the series, particularly the famous Reefton descent.

GTR is sometimes thought of as, ‘horse power heaven’, but a nimble Lotus, rain and even snow, could change everything.

The championship will come down to a battle of tyres as its unlikely the crews will repeat the errors of Snowy River. One thing is for certain, Mick Harding is unlikely to have it all his own way.

The AASA Australian Tarmac Rally Championship is partnered with Mark Bateman, motorsport Chaplain of Rapid Response Ministry, specialising in responding to critical incidents and suicide prevention; and Drive against Depression, supporting those with anxiety and/or depression through a shared enthusiasm for motoring.