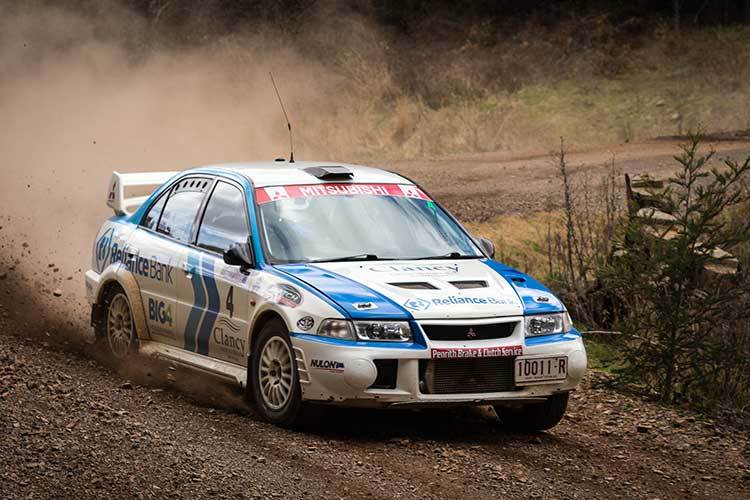 The father and son pairing of Ron and Lachlan Moore emerged as outright and Open category winners of the AMSAG Orange Rally held on Saturday, September 16.

The Reliance Bank sponsored team piloted their Mitsubishi Lancer Evo6 to a 12 second victory in what was the fifth round of the popular Pipe King Southern Cross Rally Series. Subaru driver Phil Pluck, teamed with Peter Hellwig recovered from a conservative start to storm into 2nd Outright with a late charge. Husband and wife pairing, Chris and Kate Jaques, claimed 3rd in their Lancer Evo9.

Another father and son combination, Wade and Michael Ryan took out the Classic Category in a Datsun 180B with 7th Outright. Irishmen PJ O’Keefe and Paddy Skelton were 2nd in their Escort, with the Peugeot of Jason Williams/Ryan Renton-Howe rounding out the podium.

Orange turned on a clear but cold day, with 180 competitive kilometres awaited the crews. Top seeds Ian Plenderleith and Mel McMinn were early retirements in their Lancer Evo 3, leaving 2nd seeds Tim and Peter Joass to claim stage victory in the opening 2 stages. It was to be short lived however, as the Joass team took a maximum time in stage 3 after beaching the Lancer Evo2 on a small bank.

Clear of any issues, Justin Griffin and Tom Flegl led the rally at the first service in their Corolla 4wd, with the Gazelle of Andrew and David Travis close behind. Ron and Lachlan Moore were within 10 seconds of the lead and perfectly placed to challenge for rally victory.

Toby Ivanovic had transitioned from khana events, and was signalling his talent by immediately punching out top ten stage times in his Subaru Liberty. Engine failure ended his charge midway through the event when running in 6th Outright.

Another young driver making his mark was Justin Griffin. His 7 second lead at service was extended to 26 seconds over the next two stages, however a mistake on the tricky ‘Four Mile’ test saw the Corolla slide off the road and become beached. Justin and experienced co-driver Tom Flegl were making no excuses, simply commenting that they were a bit fast for the corner.

Andrew Travis was experiencing electrical gremlins in the Gazelle, and whilst his stage times were still very competitive, concern was growing in the team and an eventual retirement occurred. This left Ron and Lachlan Moore in control of the event. The experience of Ron was winning out over his younger rivals as he judged the speed of the rally to perfection.

Phil Pluck made an aggressive late charge in his Subaru WRX winning the final two stages to close to 12 seconds of Moore. For Pluck, with co-driver Pete Hellwig it was another strong showing at an AMSAG event and a maiden victory may not be far away.

Chris and Kate Jaques were left to lament a flat tyre early in the event that cost the team precious time. Still, a consistent run through the other stages netted a comfortable 3rd Outright and 1st Lady Co-Driver.

Mark and Tristan Kent were forced to overcome early overheating and tyre setbacks to claw back to 4th in their Evo3. With a stage victory on the fourth stage, the team joined Joass, Griffin, Moore, Pluck, and Travis as stage winners. That’s 6 different stage winners, highlighting the competitiveness of AMSAG competition.

Peter Neal, with Craig Whyburn finished 5th Outright and took the lead in the series heading into the final round at Johns River, notably their home event. The WRX team has been a model of consistency this season and are reaping the rewards of reliable car preparation and experience.

Likewise, local husband and wife pairing John and Ann Fraser were 6th in their Lancer Evo4 after a strong showing. Bega director Ian Slater had first time co-driver Lisa Bobbin in the Lancer Evo8 and the team enjoyed a trouble free debut to finish in 10th Outright one place behind Mark Hudson.

The Hudson family team have been regular competitors over the past few years, with Mark’s son Harrison calling the corners in their striking WRX. With a new Mobil livery, and some impressive driving, the team achieved their strongest result to date with 9th.

Peter Neal/Craig Whyburn lead the series into the final round with a 10 point advantage over Ian Plenderleith/Mel McMinn. Chris Jacques is still in the mix in 3rd position. 15 year old Lachlan Moore is still a mathematical chance of taking the co-drivers title, despite father Ron being out of contention.

Open FWD is interesting, as both Casmiri brothers are tied in the lead with Brian Newton, all in Hondas. Kevin Ashby narrowly leads Open RWD from Tim Valantine, however any off Wayne Caines, Mick Tori, Peter Ewing, Bruce Garland or Kim Boyd can still accumulate enough points to win. 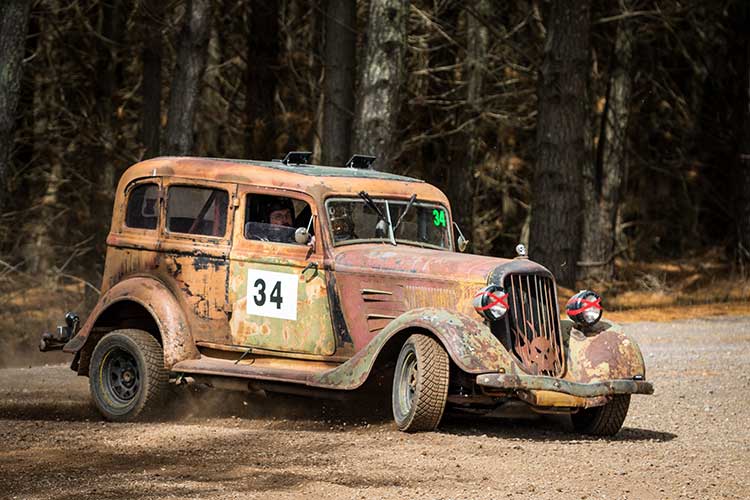 The Classic field had been decimated, with contenders Dave Hills (Escort) Tony Jordan (Stag) and Peter Thompson (Celica) all succumbing to mechanical issues. PJ O’Keefe and Wade Ryan were left to battle at the front and began an event long tussle. Jason Williams had found a turn of speed in the blue Peugeot 504 and was holding a solid third.

In the Classic’s PJ O’Keefe was forced to change a tyre mid-stage and this passed the advantage onto Wagga Datsun driver Wade Ryan. Ryan was making a determined effort at this event to ‘pull his finger out’ after some ribbing by his good mates. Jason Williams was showing the benefit of his first full season of rallying, setting competitive stage times and establishing himself in the top 3.

Charlie Gardner had the Mazda RX7 leading its class, and with a 13th place finish saw off the most unique AMSAG entry of all time, a Plymouth PE. The oddball entry was piloted by Michael Broholm and Brian Bennett, who delightfully struggled for outright speed, handling or reliability in their ‘ratrod’ rust coloured Plymouth on their way to a DNF late in the event with suspension mounting failure. The boys vow to return with an evolution of the 1934 model rally car.

John Hills and Mick Tuckey rolled their Escort into retirement whilst in 4th Classic. This momentarily halted the stage and derived times were allocated to 5 competitors.
Kim Day, with Alison Lawarick completed the course in 14th Outright, 5th Classic, 1st Class D and 2nd Lady Driver what can only be described as a successful outing in the Toyota Celica.

Wade Ryan leads the series into the final round with only the hard-charging Tom Dermody a genuine chance of overhauling the Datsun 180B driver. Jason Williams remains a mathematical chance of winning the series in 3rd. Eoin Moynihan has won the co-drivers title after strong performances beside Michael O’Hagan and Tom Dermody in the first 4 rounds.

The competitive Ladies class had 4 leaders in the first division. Tara and Jake McIlroy took a narrow opening stage victory from the similar Mazda GTX of Amanda Williams and Frank Neale, however rolled in the second stage. Amanda Williams went into stage 3 in the lead, only to strike a rock and lose oil pressure. Kim Day led into stage 4, but Jo Price (WRX) overtook her and led into service.

From here on it was the Jo Price show, with Mel McMinn was riding ‘shotgun’ after ditching the stranded Plenderleith entry to replace an ill Danielle Gotch.

This sets up a three way battle at the final round at Johns River. Kim Day leads the series, however both Amanda Williams and Jo Price are able to take the series with a win in the final round. Only Kirsty Turnbull can catch Mel McMinn for the Lady Co-Driver award.

The series now moves the NSW Mid-North Coast for the John’s River Rally on 28th October 2017. Entries are now open. Further information for competitors and spectators can be found on www.amsag.com.au