Thierry Neuville tops the standings at the completion of the Swedish Rally's longest day, after a late attack in his Hyundai i20 Coupe.

He completed the longest leg of the four-day snow and ice encounter with a 28.1sec advantage in his Hyundai i20 Coupe after distancing the Finn with a hat-trick of afternoon speed test victories. Ott Tänak was third, a further 21.6sec behind.

Neuville won the opening two tests across the border in Norway to demote Latvala, who led after last night’s short curtain-raiser. However, Latvala fought back to lead at the midpoint in his Toyota Yaris as the pair pulled clear.

Neuville edged ahead again by winning all three repeated stages, delivering a crushing blow as he outgunned Latvala by almost 18sec in the penultimate test. The Belgian extended his lead in the final stage, despite hanging on to his door which refused to stay closed.

Snow flurries made the roads slippery this afternoon and drivers fought to keep their cars in the ruts where traction was best.

“Jari-Matti had the advantage of the conditions this morning, but this afternoon was better for me as the driving line was cleaner and I tried to take the benefit,” said Neuville. “The last stage was tricky in the dark and my door was opening which disturbed me.”

Tänak was the only other driver to win a stage. The Estonian bounced back into the top three after his Ford Fiesta’s gearbox was replaced when it started jumping out of gear. 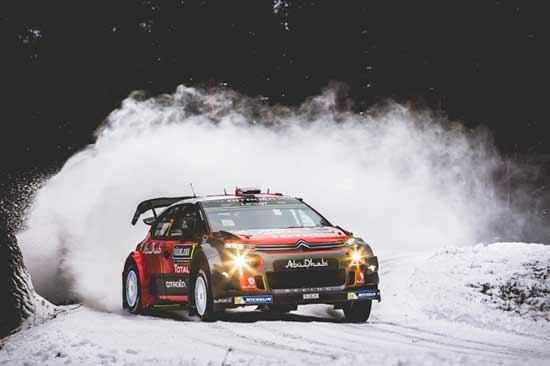 Kris Meeke is the leading Citroen in fourth place.Kris Meeke was 2.1sec behind in fourth. The Ulsterman yielded the final podium place to the recovering Tänak after a last stage mistake, after earlier losing 10sec when a bump threw his Citroën C3 off line and into a snowbank.

Road opener Sébastien Ogier endured the worst of the conditions but persevered to hold fifth, 3.9sec behind Meeke. Hayden Paddon was next, the Kiwi revitalised this afternoon after set-up changes to his i20 Coupe offset a disappointing morning.

Juho Hänninen retired his Yaris with a damaged radiator after hitting a tree, while Mads Østberg withdrew before the final stage after losing his Fiesta’s aerodynamic rear wing.