WRC Promoter GmbH, the promotional company in charge of the World Rally Championship, has introduced an official WRC app for smartphones just in time for the start of Rally Sweden (5-8 February).

The free app is available immediately for iOS and Android operating systems.

From now on, the new WRC app will keep all rally fans up to speed even when they are on the move. The app is available in four languages (German, English, French and Spanish) and offers exciting content such as live results, news, routes, live radio, videos, images and driver profiles. As well as the new live text feature, which has also been available on the WRC website since mid-January, the WRC Facebook and Twitter feeds have been integrated into the app.

The official homepage of the FIA World Rally Championship www.wrc.com was re-launched in mid-January and has met with a fantastic response from fans. The launch of the “Rally de France 2013" iBook, a digital review of the rally with exclusive content for iOs and Android tablets, has also been a success.

Oliver Ciesla, Managing Director of GmbH, commented: “Following the successful re-launch of the homepage, it was important to us to make sure that our fans are always kept well informed and up-to-date when they are on the move, too.

"Our new app is an innovative product that delivers all the important information and features in a very clear and intuitive menu that is easy to navigate. We hope that WRC fans will really enjoy using this app," Cisella added. 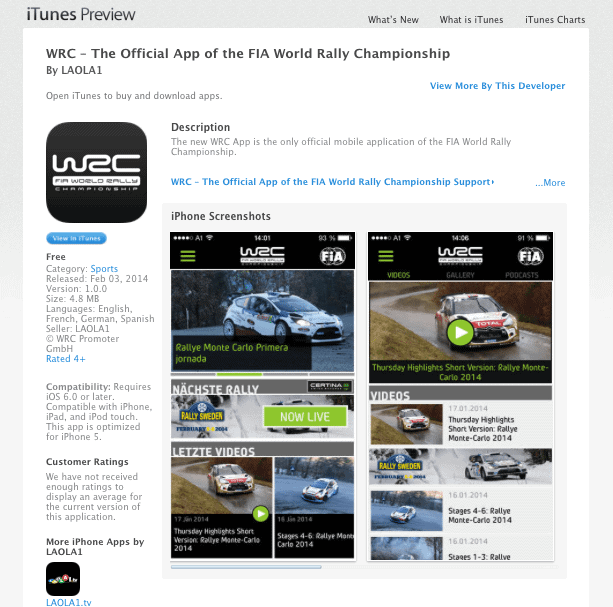