David Holder leads the Otago Rally after Day 1. (Photo: Peter Whitten)Driving his factory-backed Hyundai i20 AP4+ (pictured right), Holder and co-driver Jason Farmer started the day slowly, but finished in front after many of their rivals hit problems over the day’s seven stages.

In his first event in the car - which WRC star Hayden Paddon drove to victory in the Otago Rally last year - Holder quickly came to grips with the four-wheel drive machine.

He leads the Mazda 2 AP4 of Rhys Gardner and Ally MacKay, with the second Force Motorsport Mazda 2 of Andrew Hawkeswood and Jeff Cress a further 19 seconds back in third place.

Hawkeswood had led the event after stage three, but mechanical problems on stage four saw him drop back down the order.

Local favourite, Emma Gilmour, was even more unlucky, retiring her Suzuki Swift after stage four with gearbox problems. She later rejoined the rally ahead of the final stage of the day, around Dunedin’s streets.

Fourth place belongs to the Skoda Fabia AP4 of Glenn Inkster and Spencer Winn, with the top five being rounded out by Graham Featherstone and Dave Devonport in their Mitsubishi Lancer Evo 7.

One of the drives of the day came from Christchurch’s Deane Buist and Karl Celeste, who lie sixth in their Ford Escort Mk2, ahead of many more fancied four-wheel drive cars. 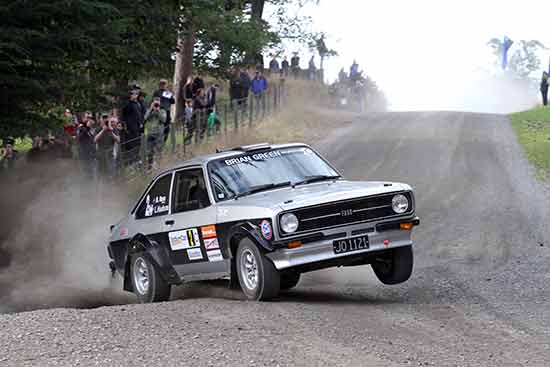 Ross and co-driver Lisa Hudson (pictured right) had a ding-dong battle with the similar Ford Escort of ex-WRC star, Estonian Markko Martin, but blitzed the field on the day’s fourth stage, winning the 32km test by nearly 20 seconds.

The pace in the classics has been hot, with former winner Marcus van Klink sitting in fourth place in his Mazda RX7 after a spin on stage five dropped him down the order, while another Mazda RX7, that of John Silcock, is fifth, two and a quarter minutes from the lead.

Event sponsor, Tony Gosling, dropped from fifth to sixth on the Dunedin super special stage, but is still well within striking distance of the top five.

It wasn’t such a great day for the Australians. Four-time national champion, Simon Evans, was seventh in his Datsun Stanza after three stages, but retired on stage four with mechanical problems.

Meanwhile, Dunedin-based Queenslander, John Spencer, had a broken rear axle and ignition problems in his Datsun 1600, dropping him out of contention.

Day 2 of the rally sees the event head south of Dunedin for some of the event’s famous stages, including Whare Flat, Waipori Gorge, McIntosh Road, and the world-renowned Kuri Bush.

After a further seven stages, the rally finishes back at the Dunedin Railway Station at 3pm.