Ogier’s week: cruising through the Alps 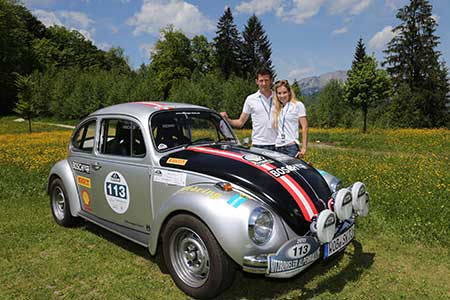 Does Sébastien Ogier have a new co-driver? No, the Frenchman merely participated in the Kitzbühel Alps Rally together with his wife Andrea Kaiser.

The couple lined up in a 136 hp Salzburg Beetle last week to drive through the Alpine landscape in the glorious sunshine. In total, the 28th edition of the rally featured 188 historic cars from seven decades.

The next day, Ogier and his wife then moved on to another event – the couple watched the MotoGP race in Mugello up close from the Ducati box, cheering on the drivers Andrea Dovizioso (I) and Andrea Iannone (I).

The current leader in the FIA World Rally Championship (WRC) has had an eventful few days: last week, he also met the world sprint record holder, Usain Bolt, and proudly posted a picture of the two of them on Facebook.