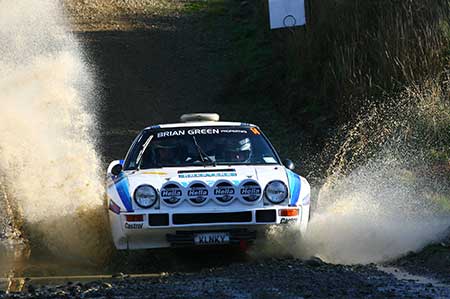 Kaiapoi’s Marcus van Klink has recorded another class win on his home event, the Lone Star Rally Canterbury, round three of the Brian Green Property Group New Zealand Rally Championship over the weekend.

The event in the past is one that has not treated van Klink well, including slipping off the road in the dark last year, but the 2015 event started in the perfect fashion when van Klink and co-driver Dave Neill held down a spot inside the top ten overall and leading the NZRC Historic class after the two night stages.

When the rally resumed after the overnight break, things just kept getting better for van Klink, with the Chesters Plumbing Supplies Mazda RX-7 powering its way through the treacherous stages that offered up ice and snow. Not only did van Klink survive the stages, he also took a two-wheel drive stage win and opened up a commanding lead in the historics, almost a minute and a half ahead of his nearest rival.

A storming run through the long 44km stage six saw van Klink record the seventh fastest time overall to elevate him back inside the top ten, an outright position he would hold to the end of the event.

With four more stages before the finish, van Klink again put in a consistent and fast drive to come home second two-wheel drive and leading NZRC historic driver, while also picking up the honour of first local driver home.

“For a rally that hasn’t been that kind to us in the past, it was certainly a pretty good one for us this time,” said van Klink. “It was all in all a pretty perfect run for us, the car is straight and we scored another solid haul of points.”

The Klink Rallysport team now turn their attention to the Fuchs Rally Gisborne on June 27, which will feature some of New Zealand’s most famous stages including the mighty ‘Motu’.