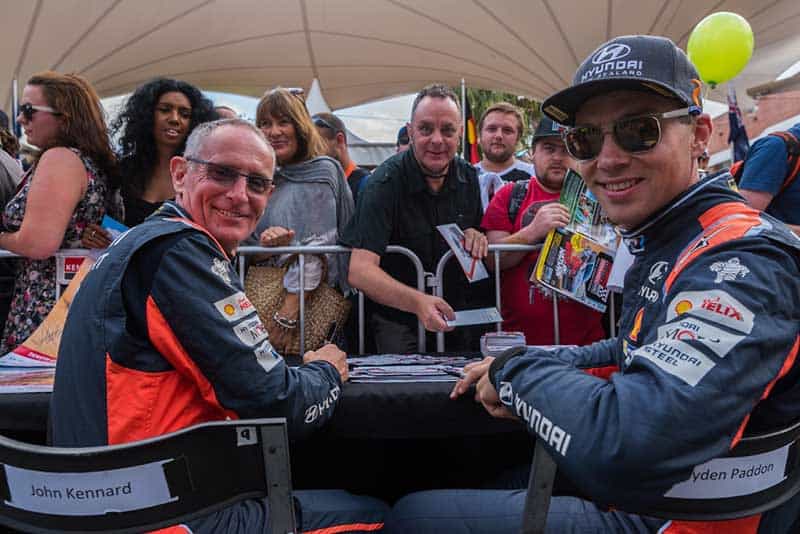 Hayden Paddon (R) will be part of Hyundai's line up for Rally Australia.

Hyundai Motorsport has confirmed a three-car line-up for the final round of the 2017 FIA World Rally Championship (WRC), Rally Australia.

The team will contest the event with Belgians Thierry Neuville and Nicolas Gilsoul, Norwegians Andreas Mikkelsen and Anders Jæger, as well as the Anglo-Kiwi crew of Hayden Paddon and co-driver Seb Marshall.

As the 2017 season draws to a conclusion at the popular gravel event, Hyundai Motorsport will be aiming to finish its fourth year in the WRC with a competitive team result.

The logistics of the rally prevents the team from running the same four-car entry that it will have at Wales Rally GB. The trio of crews has been determined based on what the team believes will deliver the best chance of success in Australia.

Neuville finished on the podium in last year’s event, having registered a previous best finish of second place in 2013. Mikkelsen has built up a strong track record at the rally in recent years, memorably winning the 2016 season finale.

Paddon, meanwhile, has scored three consecutive top-six finishes in Rally Australia for Hyundai Motorsport, an event in which the Kiwi receives plenty of support from local fans and supporters travelling from New Zealand.

Team Principal Michel Nandan said: “The complexity of logistics for Rally Australia meant that we were not able to run a four-car entry, although that would have been the ideal solution.

“We had to make the decision based on which combination of crews we felt would give us the strongest all-round chance on the Australian gravel. Thierry scored our first Australian podium last year, an event that was won by Andreas and Hayden has made continuous improvements year-on-year in this rally.

“We want to finish the season in the most competitive way possible, to lay ourselves strong foundations for next year – that’s our aim.”