Young Cantabrian Job Quantock makes his competitive debut in the Hyundai NZ i20 AP4+ rally car at this weekend’s Rally Canterbury, with his key goals to keep developing and learning as a rally driver.

“Our main goal for rally is to finish and keep developing as a driver and team while enjoying this amazing experience,” says Kaiapoi-based Quantock of the one-day rally running on Sunday 4 June. “Obviously we have one of the best, if not the best package in the championship with the Hyundai AP4+ car, but we also still have a lot to learn. The focus is just to continue to learn the car and see where we end up at the end of the day.”

Quantock will have Hamilton’s Jason Farmer alongside as his co-driver in Canterbury. Farmer also been in the Hyundai for the first two NZRC rounds, co-driving for defending NZRC champion David Holder.

Kiwi world rally star Hayden Paddon, who co-manages the Hyundai New Zealand Rally Team with his father Chris Paddon, says: “It’s exciting to have Job competing with us for the first time. We saw at the shootout last year that he has a lot of potential and we think he may surprise a few.

“However, we have no expectations of him in Canterbury other than to finish the rally and to learn the car, pace notes and competitiveness at the front of NZRC as he progresses. For Job, it’s all about learning, and having Jason Farmer alongside him as a one-off for this rally will certainly help Job with that goal.”

“I am really excited to now have my first drive as part of the Hyundai NZ Scholarship, especially with it being at our home event in Canterbury,” Quantock says. “Having Jason in the car will be a huge bonus for us. Not only does he bring several years of experience at the top of NZRC but he has also already done a couple of rounds in the car with Dave Holder, so that will also be an advantage.” 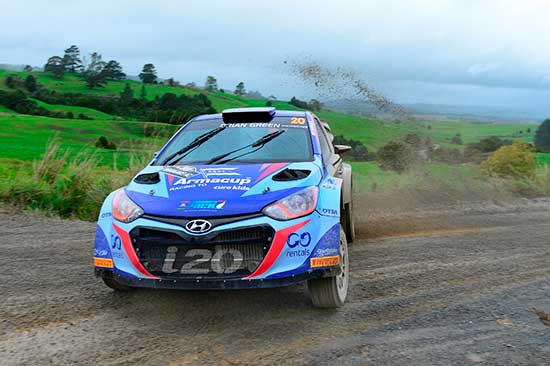 Job Quantock will drive the Hyundai NZ i20 AP4. (Photo: Geoff Ridder)The Paddon Rallysport team will test the 1.8-litre, turbocharged machine immediately prior to the Canterbury Rally, something Quantock is looking forward to, having had only a short stint behind the wheel during last year’s scholarship shootout. “It will be great to spend some more time in the Hyundai and get a bit more comfortable before the rally,” he says.

Paddon, who is enthusiastic about the current and future prospects of the relatively new AP4 rally category, notes: “The team has been working tirelessly since Whangarei to sort the engine problems we had. We know we have a fast package, and we are just sorting out the final teething problems to ensure a reliable package. The AP4 cars are now getting to a good stage of development and we are confident that what we have learnt and developed with the cars can be passed along the lines to other teams and drivers to help the future development of the AP4 category as a whole.”

Quantock and Farmer are part of a 79-strong field for the Rangiora-based rally which comprises 10 special stages and 195.15 competitive kilometres around Ashley Forest. The rally gets underway around 9am Sunday and concludes around 6.30pm to offer competitors the unique challenge of competing in the dark.

Quantock adds: “Once again, we would really like to thank Paddon Rallysport and Hyundai New Zealand for making this opportunity possible.”

Quantock will also pilot the Hyundai at Rally Waikato in October, while Paddon returns from overseas to take over the i20 rally car for the other two NZRC events, Rally Coromandel in August and the two-day, Tauranga-based Rally New Zealand in November. Recently, Quantock was also one of eight young competitors selected to participate in the New Zealand Elite Motorsport Academy, which gets underway in Dunedin in July.