Paddon and Kennard will compete in a Hyundai i20 WRC (world rally car), entered as Hyundai Motorsport N with the potential to earn points in both the manufacturers’ and drivers’ championships. The crew will drive alongside the two Hyundai Shell World Rally Team i20 WRC branded cars, driven respectively by Thierry Neuville in #7 and by Juho Hänninen, Dani Sordo and Chris Atkinson sharing the drive in #8. 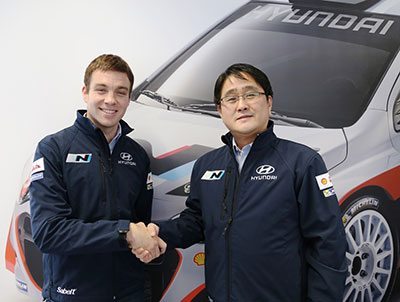 Hayden Paddon and Mr Choi, President Hyundai Motorsport.Paddon is understandably delighted about the opportunity which sees him become the first New Zealander to secure a professional contract to compete in the World Rally Championship.

“It is an incredible opportunity to be part of the Hyundai Motorsport team in these very exciting times. This is what we have worked so hard for, and it will allow us to step up another level with a good programme, a good team and a good testing and development programme,” Paddon said.

“We are so ready to make the most of this opportunity. John and I are going to work very hard to meet the targets and objectives and help the team continue to develop towards 2015. It is also a fantastic opportunity for me to work and learn alongside some very experienced people within the team and, of course, the other drivers.”

Paddon, the 26-year-old former FIA Production car World Rally Champion from Geraldine in New Zealand’s South Island, is already based in the German city of Frankfurt, less than 50 km from the team’s headquarters in Alzenau. Kennard will fly from his home in Blenheim to join Paddon at each event.

With a seven event programme confirmed in the Hyundai i20 WRC, Paddon looks forward to contesting some new and some familiar events throughout the balance of 2014.

June’s Italian WRC event, Rally Italia Sardegna, will be Paddon and Kennard’s first rally with Hyundai but the Kiwis head off to next week’s Rally Mexico to complete pre-event reconnaissance to further their learning of all WRC event routes. Rallies in Poland in late June, Finland in early August, Australia in September and Great Britain in November are also confirmed with the other two yet to be decided from the remaining three events (Germany, France and Spain).

“From Rally Sardegna onwards, we will be contesting all but one of the events until the end of the WRC season. They are all events that I am looking forward to, and other than Italy and Poland, events that we have experience of. I am particularly excited to also contest Rally Australia, a huge market for Hyundai and also the closest event we now get to home.

“It is literally a dream come true to have a good programme in a world rally car within one of the most exciting teams and manufacturers in world motorsport,” says Paddon. “This is culmination of 18 years of work, with a lot of sweat and tears and a lot of support from New Zealanders to help make this possible. Now we have to take this massive opportunity with both hands, maximise the potential learning and results from our seven events in the Hyundai i20 world rally car and build our career in the WRC.” 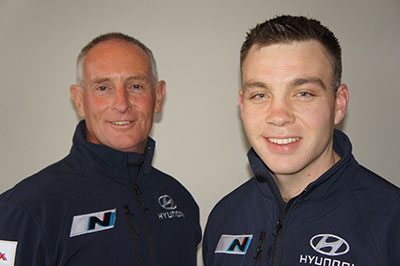 Nandan says: “As a manufacturer investing in the World Rally Championship, Hyundai Motorsport aims to support the champions of the future. For this reason we decided to engage one more car at selected WRC events under the entry Hyundai Motorsport N. Hayden is one of the very talented drivers on the WRC scene at the moment and we will support him as much as we can to reach the highest level possible. We are very pleased to welcome him and John to our WRC adventure and we look forward to seeing them in action at the wheel of the Hyundai i20 WRC in a couple of months’ time.”

Paddon adds: “To begin, our targets will be to simply learn, particularly as our first event in Italy is not a rally we have before done. It is also vital for the team to get as many miles and data as possible for the continued development of the car. As the season progresses we will certainly be measuring and hopefully matching some of our team-mates. But it’s also important to work hard with the team who are still relatively new to the WRC, to learn, develop and grow with them, as a team.”

Kennard, who’s been Paddon’s co-driver since Paddon entered the New Zealand Rally Championship for the first time as a 17-year-old, is equally excited by the opportunities before them.

“This is an incredible chance for Hayden to take his career to the next level,” Kennard says.

“With Hyundai Motorsport, Hayden can spend more time at the wheel of a world rally car without the same pressure for results and enjoy the chance to be part of and learn from a professional and highly-capable world rally team.

“This year we will be living the dream we first shared when we started competing together nine years ago and have all worked so hard in the years since to achieve.”

Paddon concludes: “I’m incredibly proud to be joining Hyundai Motorsport and can’t wait for our first official test in April. It’s going to be an exciting year!”