A popular gravel event which out of the current events nowadays in the WRC it is by far the longest standing of the long-haul events, being included in the WRC for the first time in 1980.

The route is very similar to last year, based at Villa Carlos Paz where from where the cars leave from 16h00.   There is a 1.75km downtown stage in Cordoba itself on the Thursday evening where an extra loop has been inserted in the route, making this now a mixed surfaced stage.

Two loops of stages to the south will be run on the Friday, two loops to the north on the Saturday and a single loop on the Sunday morning to the west, finishing with the Power Stage held this time on the spectacular, high altitude Giulio Cesare stage known for its remarkable rocky landscape.

With Mexico having been smoother this year than usual, Argentina is likely to be the roughest test so far for the 2017 cars.  Special feature is Friday’s San Agustin Villa General Belgrano stage, not used for many years as a section through a pine forest was deemed a serious fire risk.

Now the stage is available again, as the forested area has been destroyed – by fire.  Apart from increased spectator safety measures efforts, a new initiative is a “clean rally” campaign aimed at promoting care of the environment.

Apart from entries from Manufacturer championship teams, the record low total number of entries of fully homologated cars raises more questions about the wisdom of the policy for encouraging more long-haul WRC events.

Entries closed with 25 crews in the WRC category, of which only 20 are for points-eligible fully homologated cars and five under special rules admitting local produced cars.

Since then the Fiesta R5 entry for Eric Camilli was withdrawn, making this event the lowest ever world championship event entry level for a WRC event, overtaking the previous record at the 1981 Brazil Rally 1981 in which only twenty homologated cars took part.

Twelve 2017 World Rally Cars have been entered together with one old version World Rally Car, Gorban’s WRC Trophy Mini.  There are seven WRC2 entries but no WRC3 entries.  It is also notable that of the WRC homologated cars, there are only four drivers from the Americas – Gustavo Saba from Paraguay, Benito Guerra of Mexico, Pedro Heller from Chile and Juan Carlos Alonso, the only Argentine driver on the main event.

A lot of interest, however, comes from the 57 cars have been entered for the national Rally Argentino rally championship category.  The Argentino category admits locally made Chevrolet, Ford, Peugeot, VW, Audi, Renault and Citroen Maxi Rally cars, examples of all of which are due to take part.

It is here that the established Argentine drivers, like Marcos Ligato and Federico VIllagra are competing. 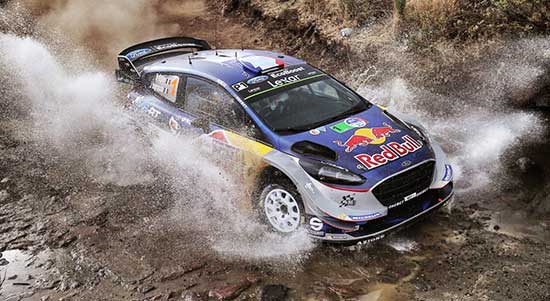 Sebastien Ogier is the WRC leader heading into the Rally of Argentina.Team by team

Same cars as in Mexico (Breen using the car which Lefebvre drove).   Reflections from Corsica: no answer for why Meeke’s oil pipe failed, but it was not the result of an impact.  First time such a failure had been experienced.

Five day pre-Argentina test was held in Portugal, which also served for pre-Portugal work.   Citroen cars have won this event 10 times in the last 12 years, Meeke winning the last time the team was here.

This is expected to be the final time the team enter only two cars this year.  Challenge of the event?  Unpredictable weather!  Cold, dry, rain, fog, every condition requiring different tactics.

Same cars as in Corsica.  Winners last year with Hayden Paddon scoring his maiden victory and winners on the previous WRC event, in Corsica by Thierry Neuville.

Argentina, however, has always been a frustrating event for Thierry Neuville, fifth overall in the last three years on this event.    “Rally Argentina is probably the roughest rally of the season.  The terrain does not suit my style of driving and it is a rally where I have never found too much speed.”

Surprising recent news for the team is that Andreas Mikkelsen was invited to test the i20 Coupe WRC last week.

Five day test (two for Ogier and Tanak, one for Bertelli) dedicated to Argentina work.

Running order debate: compromise between cleaner road surfaces further back with consequential extra roads lying in the road.  Tanak’s car damaged during Mexico recce was taken to Argentina for repair.

Five day test in Sardinia, which served as pre-Portugal and Sardinia test though Poland test will demand another test.  Latvala won this event in 2014 with VW and was leading when the suspension failed and the car crashed last year while team chief Tommi Makinen won the event three times, 1994 to 1996, with Mitsubishi.

Tactics for Argentina: the team states it is difficult to know if it is faster to run first or behind, it depends on prevailing circumstances.