To continue the strong growth of domestic rallying, Rally of New Zealand has announced an investment in the development of local co-driving talent.

Rally New Zealand have enlisted professional rally co-drivers Alex and Rhianon Gelsomino to host the academy. Italian born but now American based, Alex is well known as the man in the co-driver’s seat for World Rally and Gymkhana superstar Ken Block and has competed in New Zealand on several occasions.

Rhianon from Victoria Australia, currently competes in the American Championship with works Toyota driver Ryan Millen, having previously competed in the FIA Asia Pacific Rally Championship with Kiwi driver Emma Gilmour along with also winning the final round of the 2016 NZ Championship alongside brother Brendan Reeves.

Developing co-driving talent to compete at international level is the aim of the Academy says Rally of New Zealand Limited Chairman Paul Mallard.

“Rallying in New Zealand is enjoying a growth period at present with unprecedented competitor numbers in the Brian Green Property Group New Zealand Rally Championship. Hayden Paddon has clearly demonstrated Kiwis have what it takes to compete at World Championship level, and Rally of New Zealand wants to assist in developing co-drivers to support our driving talent,” states Mallard.

The Gelsomino pair are excited at the opportunity to share their combined experience with Kiwi co-drivers.

“As two professional co-drivers who have both won rounds of the New Zealand Rally Championship, we know what it takes to work at the highest level of our sport both Nationally and Internationally. It’s not only a lot of sacrifices, but commitment and dedication. In this training we will pass along our many years of knowledge and experience competing in rallies all over the world.

“Our goal is to see the development of more professional co-drivers from New Zealand, a country which has a great heritage in rallying. We are looking forward to working with the six co-drivers selected for the Rally New Zealand Co-Driver Academy and following their progress,” commented Rhianon.

The three-day programme commences with a full day classroom session covering all aspects of the co-drivers role from pre-event preparation to regulations. Day two includes a practical reconnaissance simulation writing pace notes along with a focus on fitness training.

Applications for the Rally of New Zealand Co-Driving Academy close on Wednesday 10th May, with the six positions to be announced late May. 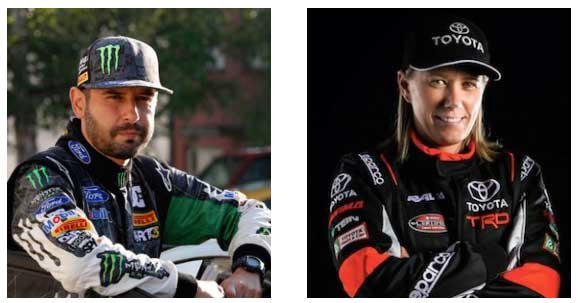 Professional International Co-drivers Alex and Rhianon Gelsomino will share their many years of experience at the Rally New Zealand Co-Drivers Academy.