Three weeks after Rally of Portugal comes another world championship south European rally, this time Rally d’Italia in Sardinia.  Martin Holmes previews the next installment in the World Rally Championship.

M-Sport will be hoping they've finally fixed their gearshift issues.The basic route is much the same as usual except that the whole event remains in the north, so that the start is no longer at Cagliari and there are now no stages around Oristano on the journey back north.  This reduces the rally distance and enables the organisers to adhere to the FIA’s rule that stages should cover at least 25% of the total distance.

All the stages will be gravel, and in the expectation of warm dry conditions the prime tyre supplied by Michelin will be their harder compound.  If the wet weather should come, conditions will radically change.

The headquarters are at Alghero, a coastal town once formerly part of Catalunya, now a town of around 50,000 inhabitants which is centred around the port and a university.

The events starts on Thursday evening and features a super special 15km inland around an artificial course at Ittiri. Day 1 will be run on a double loop of four short stages on the east of Sassari.

Day 2 will be exceptionally long with a double loop of three long stages, which total 177km, where tyre wear is sure to be critical, and the final day will be a short day on the coast close to Alghero.  Sunday will see a double loop of two short stages.

In the Manufacturers' championship VW are leading Hyundai by 49 points, with M-Sport another 14 behind. In the Drivers' series Ogier now leads Mikkelsen by 47 points, while Ostberg stays third and Paddon has dropped to fourth.

This event counts neither for the WRC Junior or the Drive DMack championships, and this year there is no auxiliary category or separate event for national competitors, though there will be an event for classic cars.

Seventeen world championship cars have been entered, with official team entries from VW, Hyundai and M-Sport but not Citroen, while there is a private Fiesta entry from the young Swiss driver, Federico Della Casa, while the Estonian, Mait Maarend, will drive the Eurolamp Mini previously driven by Valeriy Gorban.

There are a total of 49 entries. An important Italian entry is the Fabia R5 of the Italian Skoda importer teams, driven by Umberto Scandola, winner of the recent gravel Adriatico Rally, running in addition to the official Skoda entries for Lappi and Kopecky.

No entries on this event, the next WRC appearance for Abu Dhabi Total World Rally Team is due to be Poland, with Craig Breen and Stephane Lefebvre. 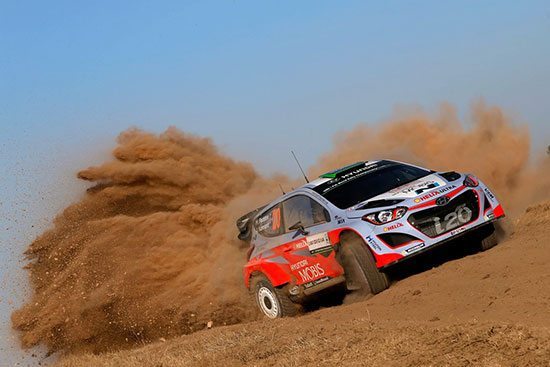 Hayden Paddon finished second in Italy last year, and will be hoping to go one better in 2016. Hyundai

Big story is the urgent work to build a new chassis for Hayden Paddon to replace the car burned out in Portugal, which was specially constructed in seven days.  Also, there has been urgent work replacing the crew’s competition documents.

Otherwise same cars for Neuville and Sordo as used in Portugal.  Once again Thierry Neuville drives for the second team, and for the second rally running Kevin Abbring will be entered (in the same 2015 model car) as well.

Team analysis after Portugal dictated human error led to the premature fuel exhaustion on Neuville’s car.  Pre-event test was carried out near Oristano.

Five day pre-event test in various locations the week before this event in which attention was given to technical difficulties, especially the downshifting troubles.  Following improvements to the engine mapping which were installed in time for Argentina, the specification of the engine, however, was unchanged.

Mads Ostberg then returned to Norway to compete on the Aurskog-Holand Rally in  Fiesta R5 before coming back to Sardinia, where he was to start running third car on the road on Days 1 and 2, one place later this time.

There is no news concerning the transmission troubles he had in Portugal as the team continue to check how this happened.

The team is happy about the improved logistics provided by the new format of the rally this year.  There is a change of World Rally Car for Ott Tanak, his Portugal car was too badly damaged to be repaired in time, while in the DMack R5 cars Karl Kruuda replaces Sander Parn for this and various events this year.

Sebastien Ogier and Andreas Mikkelsen use the same cars as in Argentina, Jari-Matti Latvala has an old 2015 car resurrected, and last used in Catalunya.  Each driver had a one-day pre-event test in Sardinia.

No definite news about the career future for VW Motorsport Director Jost Capito, due to move this year to work with McLaren F1 team, but Sven Smeets is reported to have been promoted from Team Manager to the position of WRC Director.