Emma Gilmour will be aiming for her second win in a row in her Suzuki Swift. (Geoff Ridder photo)While last year’s event headed north of the host town to use famous roads from Rally New Zealand in the mid 1990’s including Rakauroa, Whakarau and the infamous Motu stage, this year will be based inland of the east coast township on roads not used in an NZRC event since 2012.

That event the roads used on a bruising opening day that would eventually give victory to series sponsor Brian Green on what was the final round of that year’s championship. Given the drama at both Whangarei and Canterbury offered up, finishing the 150km of special stages without drama should secure a solid haul of points.

Although the NZRC rules allow competitors to drop one of the first four rounds, the only driver that has finished every rally this year is Marcus van Klink, who currently sits fourth in the standings (effectively third, with Hayden Paddon not contesting any more rounds).

This means amongst the four-wheel drive teams, the pressure is on to get to the finish, with each competitor already having a zero score against their name. A second DNF would almost certainly end any drivers chances of the NZRC title in what has been one of the most hotly contested title races in memory, with more than 25 drivers still in with a mathematical chance of taking the title.

Sitting prettiest is David Holder, who currently leads the championship despite his off-road excursion at Canterbury. However the gap that meant Holder could afford to aim for solid finishes has now dwindled down to just six points and he must attack to try and extend the margin over Emma Gilmour heading to the series finale.

Gilmour is currently the form horse coming off the back of her maiden NZRC round win at Canterbury and a second placing prior to that at Whangarei. It also seems that the reliability issues that have plagued the Suzuki Swift AP4 car seem to be behind her team, with two solid finishes while other drivers have faltered at those events.

Amazingly, the Historic Mazda RX-7 of Marcus van Klink once again sits comfortably inside the top five in the championship standings and with only John Silcock making the journey to Gisborne, has effectively wrapped up the Historic title. However with his performances to date, the RX-7 could well be a spoiler in the field and shake up the all-important points standings.

Currently fifth in the championship, Andrew Hawkeswood is really starting to find some speed in the latest generation AP4 and with some development work carried out with input from Brendan Reeves and Murray Coote plus engine developments, will be looking to fight at the front. If Gilmour or Holder strike trouble, Hawkeswood is well and truly in the championship fight.

In a three way tie for sixth place in the championship, Graham Featherstone gets the nod for the final place in the top five road order draw due to his superior fourth place finish at Canterbury where his afternoon speed was impressive. A driver who has a reputation for always being there or there abouts, Featherstone is a threat to sneak up the points table by the end of the event. 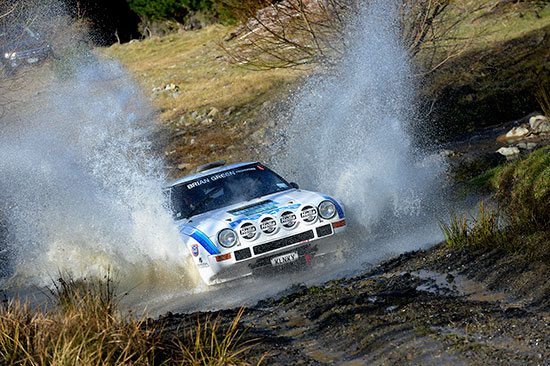 Marcus van Klink is inside the championship top five in his Mazda RX7. (Geoff Ridder photo)With Richard Baddock not contesting the rest of the season after his car destroying crash at Rally Canterbury, the remaining part of that three way tie for sixth is Sloan Cox. Seeded seventh, Cox has shown plenty of speed including leading most of the first day at Whangarei and several stage wins at Canterbury. If it weren’t for time lost in the infamous Canterbury ford, he could well have challenged Gilmour for the win. Without so many water crossings at Rally Gisborne, could we see a third first-time winner in as many events?

Starting just ahead of Cox on the road in sixth is defending champion Ben Hunt. Hunt started the season with a strong second to Hayden Paddon, but a big crash at Whangarei cost him dearly and overheating problems that started in that ford at Canterbury means although it is mathematically possible, Hunt is almost out of contention to retain his title.

Speaking of drivers that have struggled to make the finish this year, Phil Campbell is due some good luck. After only just making the start of the opening round in what was the biggest crash of his career only a week before, Campbell struggled through Otago to come home fourth and was set to repeat the result at Whangarei despite struggling all event with a blown head gasket, only for the rear diff to explode two stages from home.

Canterbury was another result that went begging when water ingested into the motor resulted in a major failure. With a new engine in the Evo 9, Campbell is back on roads he enjoys and like Hunt, is realistically out of the championship race, so has a point to prove.

At number nine on the road, Dylan Turner returns to the championship having missed Rally Canterbury but still on the high of his first NZRC podium at Whangarei. Another that was fast at Gisborne last year, Turner could be a spoiler in the championship fight.

Lance Williams’ season has been one of promise but ultimately between punctures and a soft rollover have turned potential podium finishes into twelfth in the championship. For Gisborne, Williams makes the switch to MRF tyres.

The third of the AP4 cars and another looking for a clean run after a troubled start to the season is Glenn Inkster, who starts just ahead of Clinton Cunningham. Cunningham has a point to prove after effectively being stripped of his first podium finish at Canterbury. That result went to Carl Davies who will be looking to continue his increased speed in his debut season in the NZRC.

Also looking to keep up recent form is Shannon Chambers, who was finally able to record a finish in his VW Polo proto car at a recent club rally. If they have problems, Brian Green could also pounce as he continues to get used to his Mitsubishi Mirage.

Hot on the heels of the Open 4wd field will be the Gull Rally Challenge 4wd cars, led by Grant Blackberry. Blackberry recorded some stunning stage times on the second day at Whangarei after broken axles cost him a good haul of points and although he will struggle to catch the class leaders for the championship, he will certainly be the man to chase for event victories.

In a tricky spot of wanting to fight Blackberry but with a championship lead to defend, Kingsley Jones can ill afford a DNF but will be amongst the front running group, although will not want to concede another round to the older Evo of Lee Robson, who took honours in Canterbury after a Whangarei DNF. 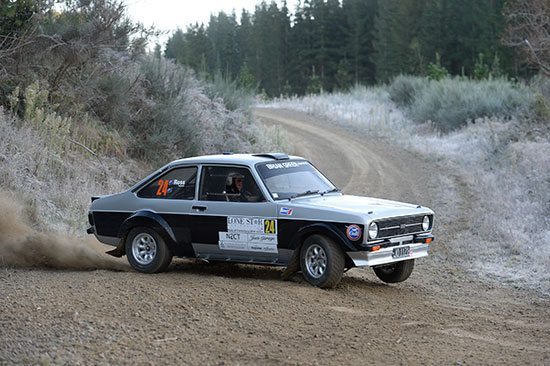 Escort driver Regan Ross in action at the chilly Canterbury Rally last month. (Geoff Ridder photo)If any of those three strike trouble, Wayne Pittams, Warwick Redfern and Jono Walker could also be on the podium, while Bryn Smith and Dan Alexander could provide a surprise result.

Also joining the Gull Rally Challenge four-wheel drive field is the Classic Group A Challenge field, making their debut at Gisborne. The class caters for Pre-1993 Group A cars and has attracted five entries. Expected to be the pace setter, Gareth McLachlan is one of two Mitsubishi Galant VR-4’s in the field along with Matt Adams.

The field also consists of two Audi’s, the Quattro of Phil Collins and the S2 of Ray Wilson, while Simon Bell represents Subaru with his Legacy. The class is expected to grow further with the appearance of a Toyota Celica and Subaru Impreza likely at the next round, Rally Coromandel.

The Historic field sees just two competitors making the trip to Gisborne. As mentioned earlier, by turning up Marcus van Klink secures the title for 2016, but will still be keen to show the similar Mazda RX-7 of John Silcock who is top dog.

The open two-wheel drive field is however grows to five cars, with Andy Martin joining the class in a Suzuki Swift, which sees him expected to join the battle between Jack Williamson’s Swift and Dylan Thomson’s Fiesta.

However the pace setter is expected to be Anthony Jones in his Duratec Escort, with Dave Strong’s Civic hot on his heels. Jeff Torkington is the sole competitor in the Gull Rally Challenge two-wheel drive class.

As usual, results can be followed at www.chrissport.kiwi, live tracking at www.rallysafe.com.au and live video feed www.livestream.com/rallylivenz 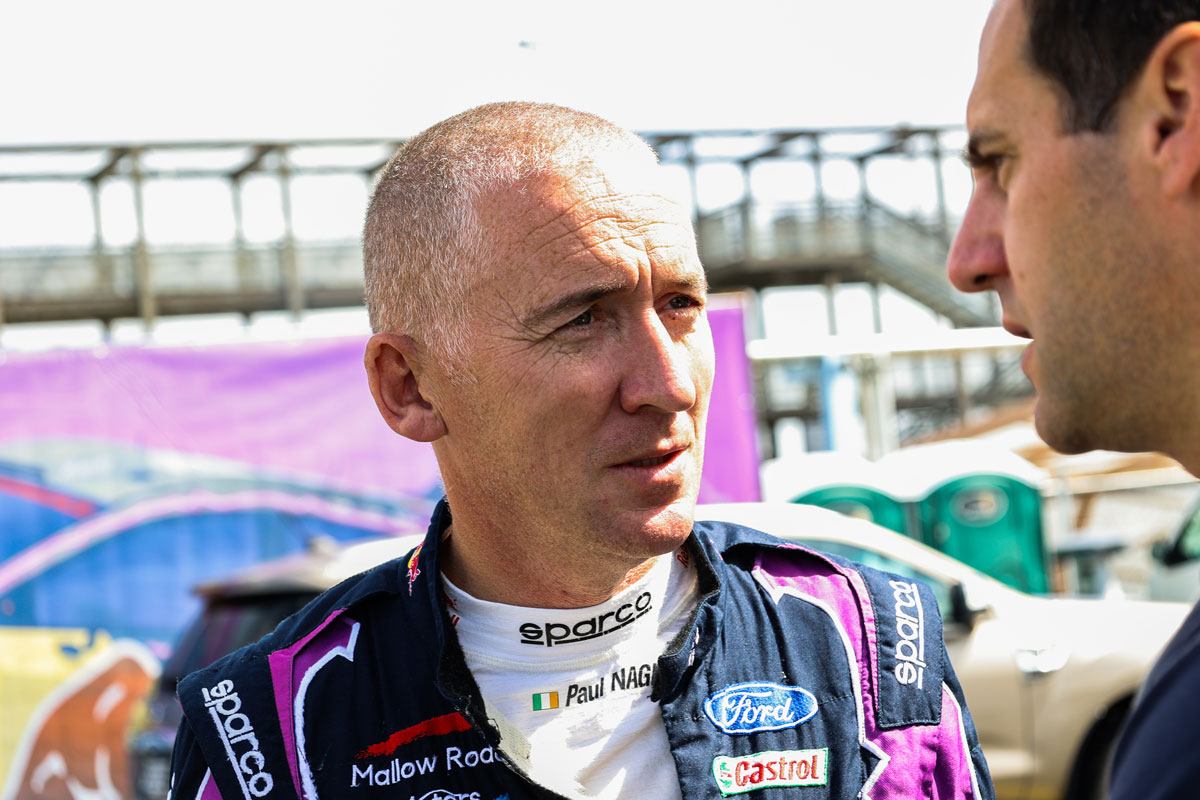 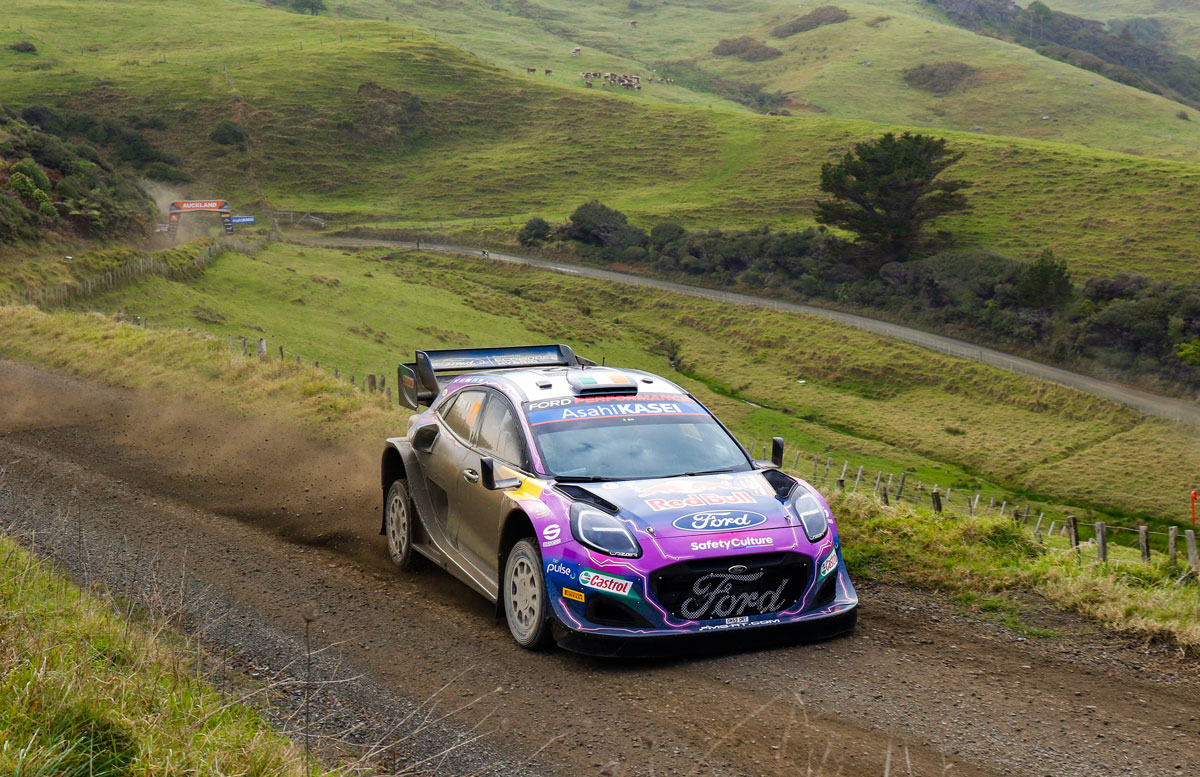