Canterbury’s Job Quantock has won the biggest rally driver development package on offer in New Zealand motorsport by being selected as the winner of the inaugural Hyundai NZ Young Driver Shootout and Scholarship.

Originally from Ashburton and now based Ohoka, north of Christchurch, 22-year-old Quantock will now benefit in a range of ways from the programme designed to boost his motorsport career aspirations, including the opportunity to drive the Hyundai NZ AP4 i20 rally car run by Paddon Rallysport in two rounds of the 2017 New Zealand Rally Championship, as well as testing and training with Paddon. There is also the potential for an expanded programme in 2018 for Quantock with the Hyundai NZ Young Driver Scholarship.

Quantock is relatively new to rally competition, having contested his first full season this year, yet he took second overall in the 2016 Mainland Rally Series and finished second in two other regional rallies. He impressed Paddon and other judges to win the two-day shootout held in Auckland and the Maramarua Forest which finished late today (Saturday 10 December). Quantock and the other four finalists went through fitness assessments and classroom sessions from Paddon and other guest experts on sponsorship planning, nutrition, media presence, career planning, writing pace notes and car set-up, before enjoying time behind the wheel of the Hyundai AP4 car with his co-driver and university friend Alan Steel.

Speaking shortly after being told he’d won the scholarship, Quantock was still finding the right words. “It’s amazing; a surreal feeling to win. There was always a chance of winning, but I wasn’t too sure how big a chance we had, being relatively new to the sport. It was whoever had the best package that Hyundai was looking for; luckily that was us.”

Quantock says his time in the Hyundai AP4 car with co-driver Alan Steel was a big highlight. “The whole package that Hayden and Hyundai have put on this weekend has been invaluable. A big thank you to Hayden and Hyundai for this amazing opportunity – it’s pretty unreal for where Alan and I are going in this sport and for the New Zealand motorsport community as a whole. Where Hayden’s going and where he’s taking the sport is amazing and it’s going to be great, not only for our future and everyone’s future, I believe.”

Quantock also paid credit to his fellow finalists and their co-drivers at the shootout. “Everyone’s been very friendly and welcoming. I hadn’t met them all before, but I’ve already made great friends.”

Paddon says there were a few reasons why Quantock stood out. “Job is definitely the most inexperienced of the crews in the final, but he showed a lot of potential in all aspects – from the fitness sessions to how he conducted himself throughout the two days. He fits the whole philosophy of the Hyundai brand to foster new talent. I think Job can be a great ambassador for rallying, a great ambassador for Hyundai and he has a lot of potential to learn and improve. We believe he can be a New Zealand champion and potentially compete well internationally.”

Paddon said the shootout judging was almost harder than a rally. “It was made even harder with how good and how close everyone was when we came to actually pick a winner. We weren’t just looking for the fastest driver – it’s the whole package, about their long-term potential.

“Over the whole weekend, everyone was attentive with everything we talked about. It’s a great feeling for us that they found the shootout valuable, so I hope they’ve all taken something away from it, some of the secrets, I guess you could call them that I’ve worked on over the few years that we don’t normally tell people.

“Our thanks to everyone at Hyundai New Zealand and our team who put the whole shootout programme together. Without Hyundai, the shootout and the scholarship ahead for Job and Alan would not be possible.” 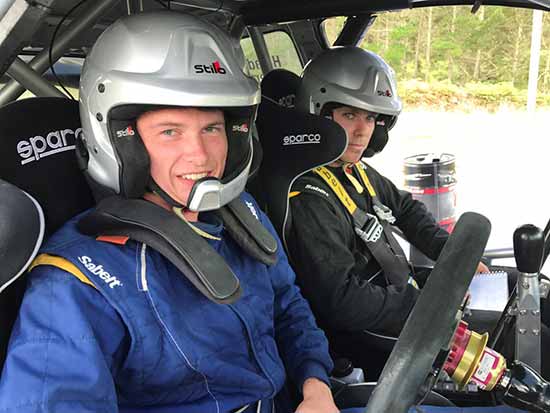 Job Quantock won the Hyundai NZ Young Driver Shootout,Bernice Mene, leader of the Hyundai-backed Pinnacle Programme for talented teens, says the shootout sits well alongside the Pinnacle Programme. “It’s the whole mentoring process, looking at your support network. With Pinnacle, we’re working with students who are slightly younger than the shootout contestants, but the process is similar in how we get them to reflect on where they are, what their goals are, how they’re resourced and where they can think they can improve. You don’t know about these things until you’re exposed to them through programmes like this shootout. Hayden’s passion to give back, that’s exactly Pinnacle’s and Hyundai’s strategy to give back to youth and to nurture them to be bigger and better than they are now.”

Mene observed the different backgrounds, ages, approaches and support networks of the five finalists. “I think Hayden highlighted for them all to have processes in place, break the goals down to achieve your dream. The contestants can now see those pathways and contacts they can tap into. They also said the hands-on practical stuff was so useful – to have Hayden driving them around in the van taking recce notes; no one’s ever done that with them before so they said it’s just really amazing to learn from Hayden.

“I could see many points Hayden talked about transfers across to other sports, but rallying is such a team sport, a specialist sport, you need even more diverse skills, like budgeting and financials, than a netball or rugby player.”

Throughout the two days, participants asked if the shootout will be an annual occurrence. Paddon says that nothing is confirmed yet, but he hopes so. “The idea is that this is phase one. We’d certainly encourage the other finalists and the guys who joined us for the classroom sessions to reapply if we run this again next year.”

The exact events that Quantock and Steel will contest in the Hyundai AP4 car in the 2017 NZRC are yet to be confirmed, but more news will be available on the newly-established Paddon Rallysport Facebook page, https://www.facebook.com/paddonrallysport.