Hoonigan Racing's Ken Block and Alex Gelsomino won the Rally in the 100 Acre Wood - round two of the Rally America National Championship - held on February 21-22 in Salem, MO. The victory marks the seventh time the team has won the event out of their last eight attempts.

Block led the rally from the very first stage, but Subaru Rally Team USA's David Higgins and Craig Drew kept it close despite getting a flat on Stage 5. The first day of competition ended with Higgins only 20.6 seconds behind Block. On the second day disaster struck Higgins with an engine failure on Stage 9 that forced his retirement. The DNF also broke an amazing streak of 22 consecutive podium finishes by Higgins.

Ken Block on his way to victory in the 100 Acre Wood Rally."I felt as if I had very few mistakes this weekend," said Block, "Unfortunately, my top competition fell out on day two and I was able to extend my lead. It took some pressure off, which I don't like, because I like to push hard.  Instead, I was able to just enjoy these roads and put on a good show for the fans."

Action sports icon, Travis Pastrana, who rejoined Subaru Rally Team USA with co-driver Chrissie Beavis, hung on to take second place overall.  It is his first rally podium after a nearly three year absence from the sport.  His placement is even more remarkable considering he withstood two intense days of rally racing with a repaired broken leg and recently dislocated ankle.

In Super Production (SP), 2013 Rookie of the Year recipient, Nick Roberts, stood on top of the SP Class podium for only the second time in his short rally career.  Roberts and his co-driver, Rhianon Gelsomino, capitalized on the retirement of other top SP contenders to find themselves first in class and fourth place overall.

"It's pretty surreal at this point," added Roberts, "Never thought there was a chance to win. We worked hard on our notes and pedaled the car the best that we could."

Dillon Van Way and co-driver Andrew Edwards kept their podium streak alive with a Super Production second place finish only 48.3 seconds behind the leader. Van Way and Edwards have seen immediate success since entering SP competition from the Two-Wheel Drive ranks. They have entered four Rally America rounds in their SP Class car and have stood on the podium each time.

2013 Super Production champs, David Sterckx and Karen Jankowski, rounded out the finishers in third place. Overheating problems plagued the team and they spent the entire event trading positions with Evan Cline and Greg Dorman until the very last stage when Sterckx and Jankowski finalized third place. 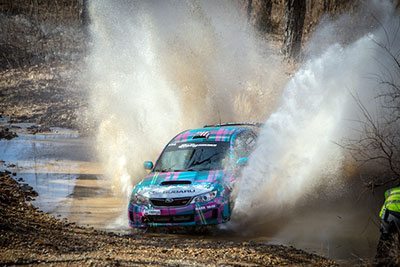 Nick Roberts and Aussie co-driver, Rhianon Gelsomino, were fourth outright and first in class.The Super Production Class lost a big contender before the race even started. Lauchlin O'Sullivan and Scott Putnam lost control on a practice stage hitting a tree in the co-driver's front quarter.  The team recently won at Sno*Drift in January and were favorites entering the 100 Acre Wood Rally.  See the crash video here: http://vimeo.com/87311998

Ford Racing's Andrew Comrie-Picard (ACP) with Ole Holter won the Two-Wheel Drive (2WD) category in their Team O'Neil prepared Ford Fiesta, outlasting second place Scion Racing's Matthew Johnson and Jeremy Wimpey. However, both drivers spent most of the event chasing after 2WD leaders Will Hudson and Brian Szykowny, until damage sustained from a big jump forced Hudson out of the race. Both ACP and Johnson have 2WD victories under their belts, but Johnson holds onto the 2WD points standing lead.

"This event was really confidence inspiring," commented Comrie-Picard, "This event really favors high horsepower for faster speeds, but we were exact with the Ford Fiesta and we did what we came here to do. "

Third place in 2WD went to brothers Troy and Jeremy Miller, who entered just their second national event and have stood on the podium both times.

The Tresspassers Wil Regional Rally and 100 Acre Wood Regional Rally was won by Evan Cline and Jake Blattner. The drivers were also in national SP contention and finished fourth in class and seventh overall.

The Rally in the 100 Acre Wood was forced to cancel Stage 11 when an unrelated automotive emergency closed the highway on the transit route.