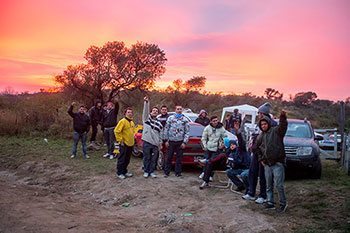 Leg 2 was set to be the biggest of all days, an earlier than normal start to drive the 100+ km to the stage start of SS San Agustin. The first of two spots was, according to WRC photographers, the largest water splash in the championship. It was deep and long and at the very end of the splash was a slight hump, so if drivers got it slightly wrong anything was likely to happen.

We arrived at the start line in the dark and were met with a big ‘NO YOU CANNOT PASS’ from both police and someone who seemed to be an official. This was an usual occurrence here - unfortunately in Argentina there don’t seem to be many officials like I am used to.

Road closures are manned by the police, and well let's just say they try to intimidate you with their power. You see in Australia we are used to officials being briefed, yes sometimes we come across those who question our motives, but they know we are allowed to be there. However here it just wouldn't be possible. The amount of police presence is something I have never seen or experienced before.

Regardless, the usual ritual took place. Richard (the other photographer with us) approached the ‘officials’ with the media guide which clearly stated we could be there at that time and after five to ten minutes of discussions, we were on our way.

Unless you have been here or maybe to somewhere like Mexico or Portugal, you probably haven't seen these types of fans before. They line every inch of the stage, bring their families, friends, makeshift kitchens and knuckle down for a long day watching these amazing machines and drivers do their thing. They don’t make it easy for photographers either, heckling and continually berating. I guess when you start drinking at 6 am it's bound to happen!

The water splash definitely delivered as promised. It was amazing watching the speed at which the cars took the water and the line they took, some hit it so hard that spectators 20 metres away were getting drenched.

Our next spot was just a few kilometers ahead, however we had almost a five hour wait.

After the morning's stages Latvala still had a slight lead over Ogier with Meeke still lurking in third. The third VW of Mikkelson was only 40 seconds shy of Meeke, so a 1,2,3 VW podium was still a possibility. 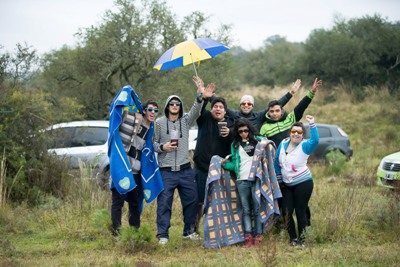 With a five hour wait I made friends with the locals. I think I handed out more business cards that day then I have in the seven years of shooting motorsport. The language was still a barrier but I got by - the Argentinean people are enthusiastic, passionate and love socialising, so it was a great experience spending a few hours with the locals.

I knew the decision to come to this spot was a good one when the WRC TV guys showed up. It was a long straight on to a jump downhill with a slight kink left, and it was narrow. Argentina is made up of jumps, water splashes and spectators. This was going to be good.

With Leg 2 done, the positions had not changed. Latvala had extended his lead over Ogier ever so slightly, and Meeke had increased his lead of Mikkelson by almost two minutes now. With one heat remaining on some of the most iconic stages in the WRC, it was going to be an exciting last day to Rally Argentina.

Story and photos by Michael Vettas.

Visit our Photo Gallery for more of Michael's awesome photos from Rally Argentina.