Aussie photographer, Michael Vettas, continues his trip through Europe, and has stopped in to catch all the action of Italy's round of the World Rally Championship. Here's his report from Day 1.

The night before the first day of competition at Rally Sardinia, teams headed to Calgiari for the Super Special Stage. According to reports, only the WRC crews got to compete as crowds became unmanageable, so for the majority of competitors the 500km+ round trip wasn't a worthwhile trip. 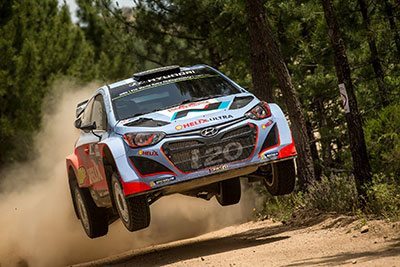 Needless to say Mikko Hirvonen came away on top with Neuville in second and Ogier following in third position. This would be one of three stages Hirvonnen would complete as disaster struck the M-Sport driver early on Friday morning.

Friday began quite late, the first stage did not begin till 11:35am, however we all had to travel the 150km east towards Olbia where both Friday and Saturday stages are held.

Disaster struck Mikko after stage 3 on transport, after changing his tyres and checking tyre pressures, the pair noticed smoke coming from the rear of the car. Within seconds the entire car was engulfed in flames, within a few minutes the million dollar machine was destroyed completely.

Mikko said: “We changed the tyres and checked the pressures as normal between stages and everything was okay. But then the car caught fire for no reason. When I was fighting the fire, the rear bumper was fine and sometimes that can break and catch on the exhaust which causes a fire. It’s strange.”

I managed to get to four different spots with good success. Not wanting to follow the rest of the photographers, I found my own jump, not quite ‘the jump’ but a spot still yielding good results. You be the judge.

After the morning stage Latvala led Ostberg by only 2.2sec with a surprise entry of Prokop in third.

I managed to catch up with Hayden Paddon and had a quick chat. He seems very upbeat even with the pressures on his shoulders. He mentioned that the roads were very difficult and nothing he had experienced before, and just as I mentioned in my recce report, slippery and dusty. The surface doesn't sweep very well, so even with Hayden back in the field he was still coming to grips (excuse the pun) with it.

Nevertheless, he seemed to be very focused and ready to show everyone what he has. He certainly knows how to drive and he should see steady improvements as the rounds go on.

In other news, Hanninen of Hyundai had a major crash that forced him out of the rally.
The Finn had briefly led the rough gravel rally on the third stage and was lying second overall when he made a costly mistake 5km from the end of the fifth stage.

His i20 WRC rolled violently and struck trees. The car was extensively damaged and Hanninen’s rally was over. He blamed a missing pace note from recce for the incident

“We approached a right-hand corner very fast and I lost the front, went wide and rolled many times,” Hanninen explained. “It took me by surprise but I realised after that there was a slight dip, almost like a rut, which caught me out. I should have noticed this from the recce.”

With Hirvonnen’s fire, all stages in the afternoon where pushed back by almost an hour and a half.

At the end of Heat 1 Latvala still led, Ogier had managed to move up the field and was only 22.4sec behind, with Ostberg a further 11.3sec behind Ogier.

Heat 2 would see two stages repeated with the largest stage on the WRC calendar in Monte Lerno, a massive 59.13km where teams manoeuvre through a massive farm of windmills, which should make for some cool pictures.

Michael Vettas’ report on days two and three is coming soon. Check out his fantastic photos from Rally Sardinia HERE. 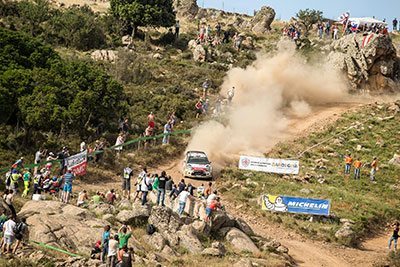