Rally of the Heartland – a co-driver’s perspective

Long-time rally photographer, Stuart Bowes, and two-time ARC-winning co-driver, Mark Nelson, returned to rallying in last weekend's Rally of the Heartland. In a result that surpried many, they took their Mercedes Benz to an impressive second place. Mark Nelson explains.

Finishing second to a four-time Australian Rally Champion, in a car that was competing in its first event and sitting next to a photographer who hadn’t driven in a rally for some 30 years was just about the best return one could have hoped for.

Stuart Bowes built the 450SLC Mercedes Benz to have fun, finish rallies, not necessarily win, but not be hosed off either, so I think in its first outing that goal was achieved.

Whilst it’s been a long time since I did a blind event, it was a good way to start a new driver/co-driver/car combination.

Heading out to the first stage, there was a touch of nostalgia but also some trepidation. I hadn’t competed for 23 years and there were more things to deal with these days. The tight space to crawl in and out of with our less than flexible bodies, the personal safety gear, Rallysafe, rallyresults.com.au, Restricted Speed Zones. 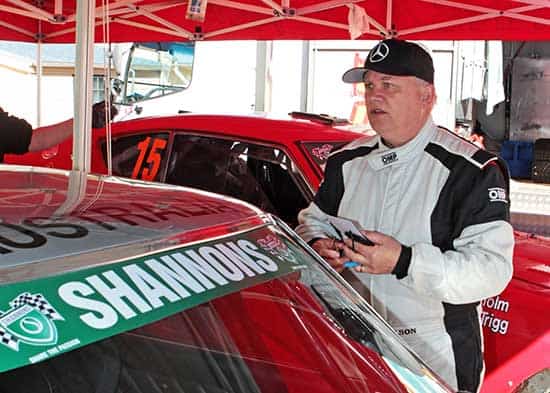 A pensive Mark Nelson on his rallying return. (Photo: Jon Thomson)At the end of SS1, I consulted Rallyresults.com.au which told me almost instantly that we finished third on stage. “Pretty good for a pair of old buggers” was Stuart’s reply. Third outright so far. Stop the rally now!!!

We were both getting used to each other and the performance of the car was awesome, it was so forgiving and we weren’t doing anything that caused us to jeopardise our maiden event. Self preservation of the car and the humans contained inside was paramount.

My belief, many months before the event, was that we could get this car onto the podium. With such a reliably built car, we only had to keep a bit of pressure on ourselves and the guys around us and things would go our way.

Having made a few comments in our road books from the first run, the complexion of the night stage was somewhat different. At the end of the long night stage I reached for rallyresults.com.au again, turned to Stuart and said, - “We just took 1m 11.9s out of Simon”. You can just imagine the banter inside the car then. Giggling like newbies.

End of Day one – we had moved into second outright and only 13.7 seconds behind Simon and Ben.

We had a few issues with the oil cooler on Day 2 which challenged us, but we wanted to ensure a finish so decided to take the last stage cautiously to preserve second place - which we did.

A congratulatory shake of hands and I will be the first to admit I felt quite emotional for Stuart.

The event proved that a couple of older campaigners, in a well-built car can achieve a result.

To myself – I proved that at my age (and I won’t  tell you what it is), I can still be accurate, focussed and competitive in a car, manage to cope with all the changes to car, safety equipment, rules and regulations, but more importantly, enjoy this fantastic sport of ours.

Read our full Rally of the Heartland report HERE, and see a gallery of John Lemm's photos HERE.