The organisers of the upcoming International Rally of Queensland have promised that course changes for this year's event will retain the tough nature drivers have come to expect, but without the extremely rough ‘car breaking’ sections.

“We’ve looked at a number of things since last years event, taken on some of the feedback from competitors, and looked to make some positive changes for 2014,” explained Clerk of Course Paul Woodward.

Queensland has become renowned as the toughest event on the ECB ARC calendar, partly because of the endurance three-day format but more for the harsh road conditions. 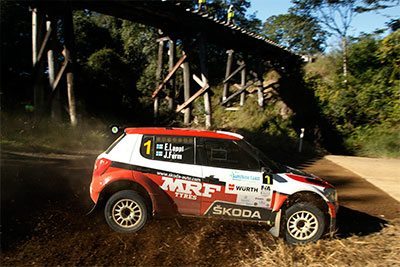 “We’ve really worked hard with the forestry to fix up some of the really rough sections of road plus we’ve made changes to the configuration of some of the stages to avoid some of those car breaking sections.”

“We’re not using the Mona section of stage, and we’ve realigned the million stage to take out the really rough country. We’ve also revised other stages drivers will be familiar with, and added a few new sections that we haven’t used for a while too.”

Woodward was quick to point out that while fixing and even removing the rough sections has been a priority the organizing team have been mindful of ensuring the event still provides a stern test to drivers and teams, while also keeping an eye on the safety of competitors.

“The nature of the forests around Imbil and Kenilworth are always going to provide a challenge to drivers, it’s tough countryside. We want to run a fun, safe event, so we’ve also taken on feedback and removed the super fast part of Kandanga.”

“The weather in recent months has also been better than we’ve had in previous years, so I personally think the roads are in the best conditions I’ve seen them in a long time!”

The changes don’t just stop with the course, Woodward steps in to the Clerk of Course position to replaced Rally Queensland veteran Errol Bailey, with Woodward also taking the chance to make some changes to the organizational team.

“I think one massive positive is Iain Stewart is rejoining us this year as the course checker,” said Woodward. Stewart is one of Australia’s most experienced navigator, including stints alongside Ed Ordynski.

The changes don’t just stop on the course and the event administration, with Woodward highlighting an increase in the number of spectator points for 2014.

“I think spectators will be really happy with the locations we’ve lined up for this year, it’s a mix of traditional spots and some new ones we’ve not used before. In addition a couple of the spots will run in different directions, so spectators will get to see the cars attacking corners in one direction on the Saturday, and then the other way on the Sunday.”

“We’ve also added a VIP Gold pass this year, which gives access to a special spectator point featuring a very tight uphill on the Breakneck stage.”

“A month out the weather forecast is looking pretty good. Cool, crisp mornings followed by really glorious days. For competitors, teams and spectators it’s looking like we’re going to have a great running of the event this year!” Woodward concluded.

Entries for the International Rally of Queensland closed Thursday 29th May for ECB ARC, National 4WD and Classics. Entries for QRC, Clubman and All-Comers closes on Friday 6th June.