Report: Caves Classic Rally goes down to the wire

In one of the closest finishes in the history of the NSW State Rally Championship, Citroen driver Tony Sullens and co-driver Kaylie Newell emerged victorious from a day-long fight where the lead changed several times. The second round of the MTA NSW State Rally championship set out from Oberon under bright and sunny skies and the competition was on from the start. The first 10 cars on the road comprised Mitsubishi Evos of Clarke (now with stand in co-driver Jim Gleeson, after Ryan Preston was restricted to Queensland), Tim Joass, Chris Giddins and Ron Moore, Sullens in the Citroen DS3RT, the Audi Quattro of Mal Keough, Andrew Travis in his new look Gazelle, the Andrew Penny Subaru, Griffins’ Toyota Corolla and Nathan Quinn, a young bloke in an old car! The rally comprised nine stages and ran the first five before service, and then a re-run of the previous four. 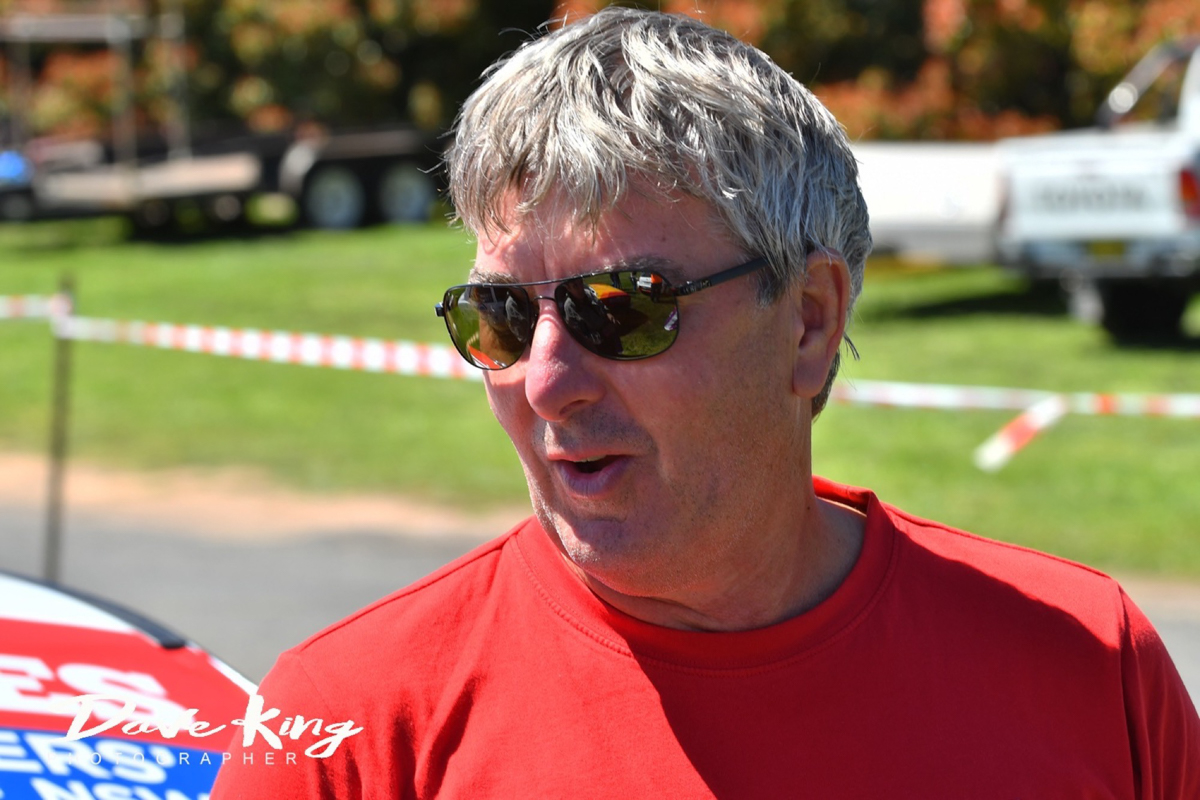 SS 1 ‘Lowes Mount’ saw the Keough Audi just edge out the Clarke Evo that was running first on the road. It looked like Penny would grab third, but starting in position #23, the McAloon Escort stormed through on the improving roads to grab third. Jamie Neale’s Honda left the road mid-stage and was beached until recovered and started Heat 2 in the afternoon. 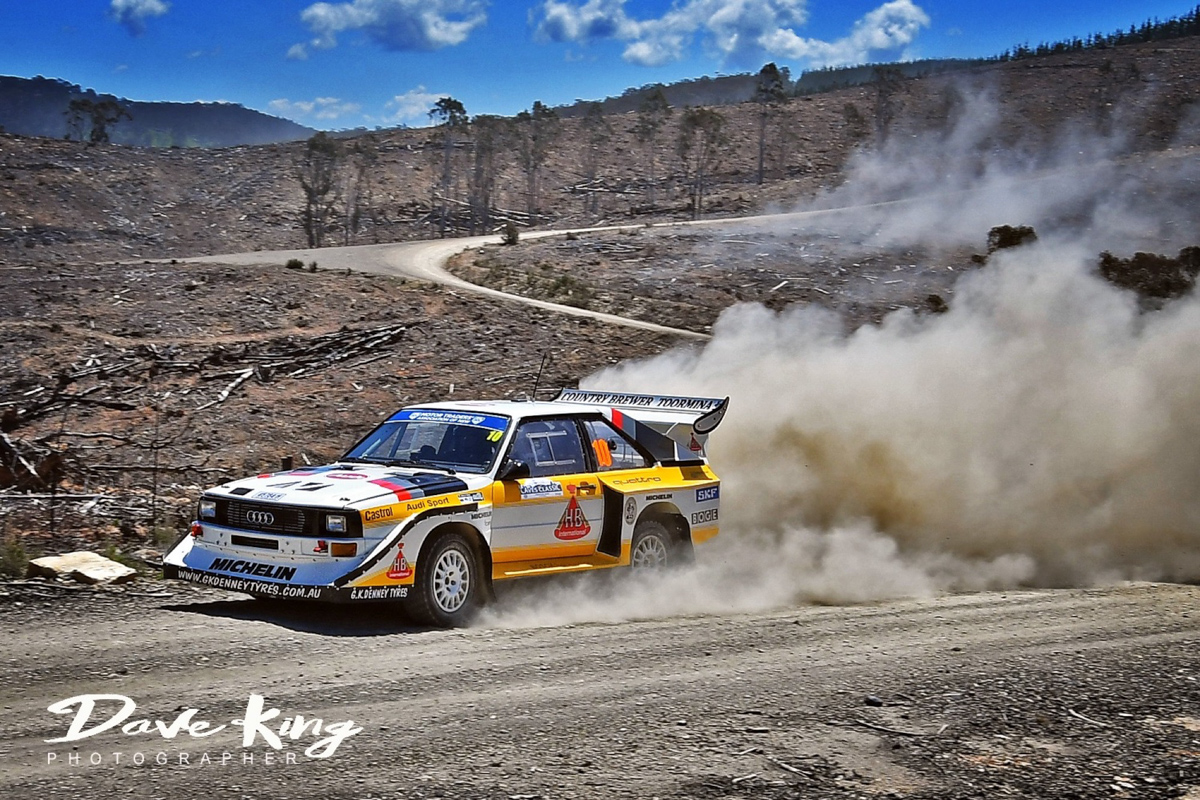 Mal Keough was a close second in his Audi Quattro S1 replica.

SS 2 ‘Roberts’ was a magic open stage on fast and dusty roads, but luckily the winds had picked up. Clarke was fastest, followed from Keough and Penny, separated by nine seconds. Sullens had started as second car on the road and was struggling for grip on the long uphills. SS3 ‘Essington’ was a longer 18km stage as the field headed south towards Black Springs. Clarke was again fasted, this time 17 seconds quicker than Sullens’ improving Citroen and again the McAloon Escort, taking third only 1.5 seconds behind. Both Penny and Griffin lost time with mechanical issues. SS 4 ‘Bemerang’ was the longest stage of the event at 20km. Clarke was absent from the front of the field and came through after four cars and dropped 18 seconds to the leaders. The Moore Evo was handling much better after a mid-week wheel alignment and brake pad compound change, and after sitting inside the top 10 so far, took fastest on this stage by eight seconds from the Keough Audi and Sullens Citroen, a further 7 seconds back. Further down the field the Neill Hyundai left the road at the 17km mark, but the crew were okay. 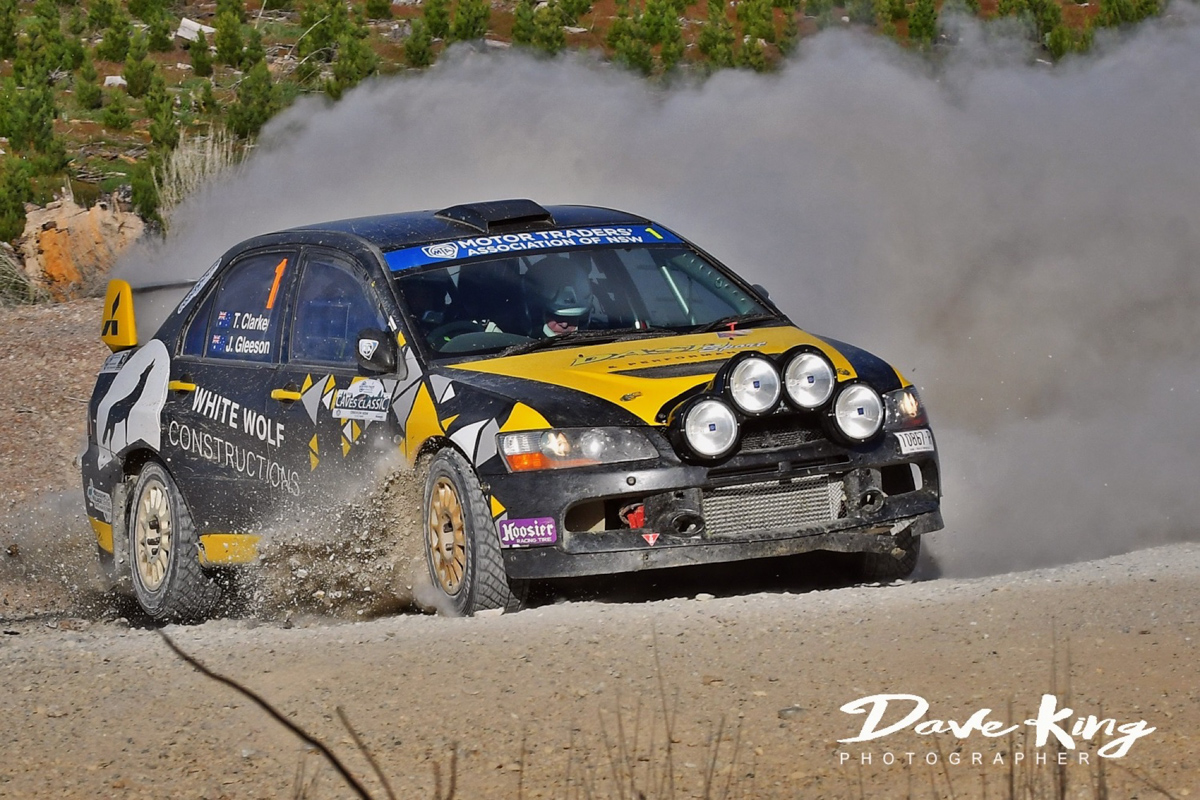 SS 5 ‘Staceys’ was a shorter 9km stage and again Moore took fastest from Keough by just one second, and the Quinn Mazda RX2 getting third, four seconds back. At the service break, Clarke still had a 17 second lead from Keough, due to his better speed in the first few tests. Moore was third, 34 seconds from the lead and was the surprise of the morning loop. Sullens was just behind in fourth, 36 seconds from the lead, battling the loose gravel as second car on the road. Quinn was still in the mix, and while setting times inside the top 10, just didn’t have the top speed on the faster sections to keep up with the leaders. Joass, Giddins and Cullen all were going well, Travis in the Gazelle was sitting in ninth and youngster Taylor Gill rounded the top 10 in his Subaru. 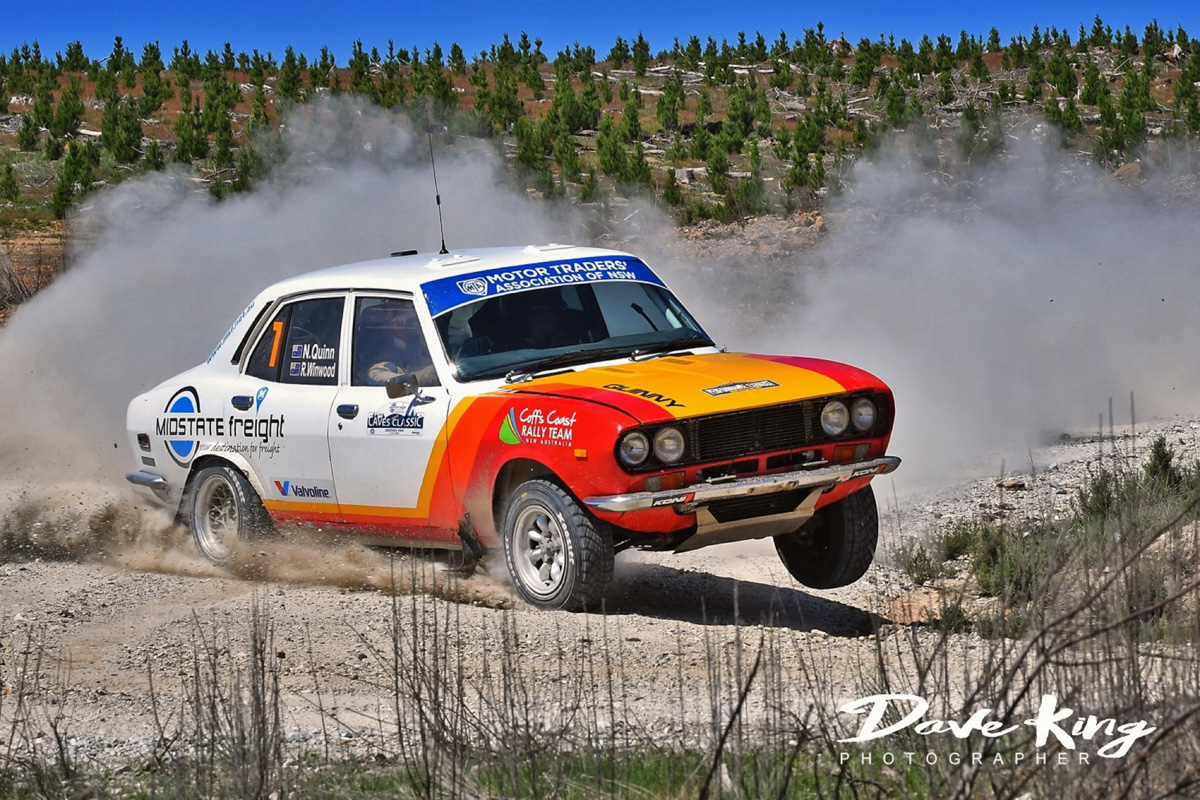 SS 6 ‘Roberts 2’ saw Sullens make his move. Now on better roads that had been cleaned from the morning pass, he went quickest from Clarke and Keough, but all three were separated by just 2.6 seconds! SS 7 ‘Essington 2’ was the stage that most impacted the event. Sullens was again quickest, this time 14 seconds ahead of Keough, and Penny, who had rejoined after the service, was third. Clarke struck trouble and finished the stage, but dropped 38 seconds to Sullens. The leader board changed yet again and now the Keough Audi was leading outright by three seconds from Sullens, with Clarke now dropping to third, a further four seconds back. On SS 8 ‘Bemerang 2’ Clarke, battling with an ill car that looked very wrong at the back end, struck back to take the stage win over Sullens by five seconds. Keough was only 0.4 seconds back in third. 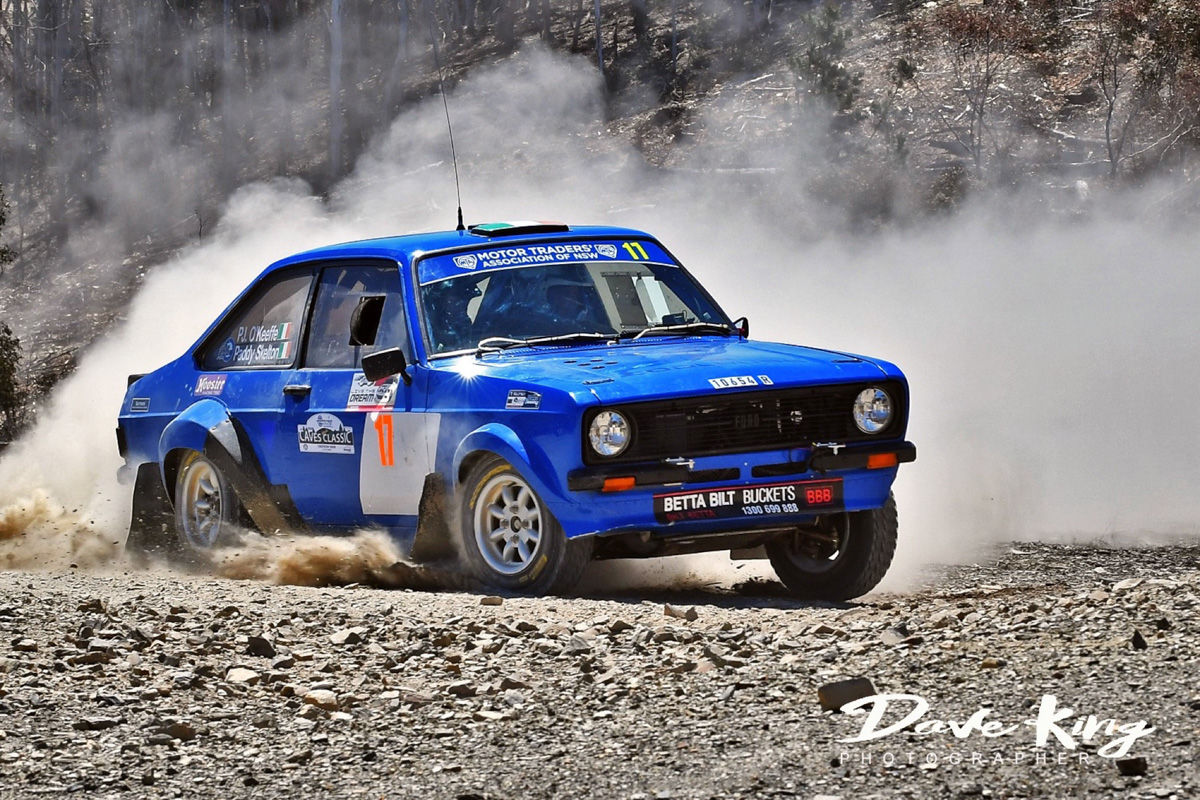 The fight was going down to the last stage with Keough, Clarke and Sullens separated by just 2.7 seconds. A Quattro, from an Evo, and a Citroen front-wheel drive – what a rally! SS 9 ‘Staceys 2’ was an all or nothing stage for Sullens. For the front running cars the stage would run just on sunset, for those further back it would be in full darkness. Before the rally started Sullens said it was maximum attack and now must have had his eyes on the #1 spot. The stage is mainly flat with fast open sections and humps, and Sullens stopped the clock with a stage time of 5m17s. What could Keough and Clarke do? Try as he might, Keough roared the Audi through in a time of 5.22 and Clarke in the Evo recorded 5.30. Tony Sullens and Kaylie Newell in their Citroen DS3RT had won the rally by 2.1 seconds. 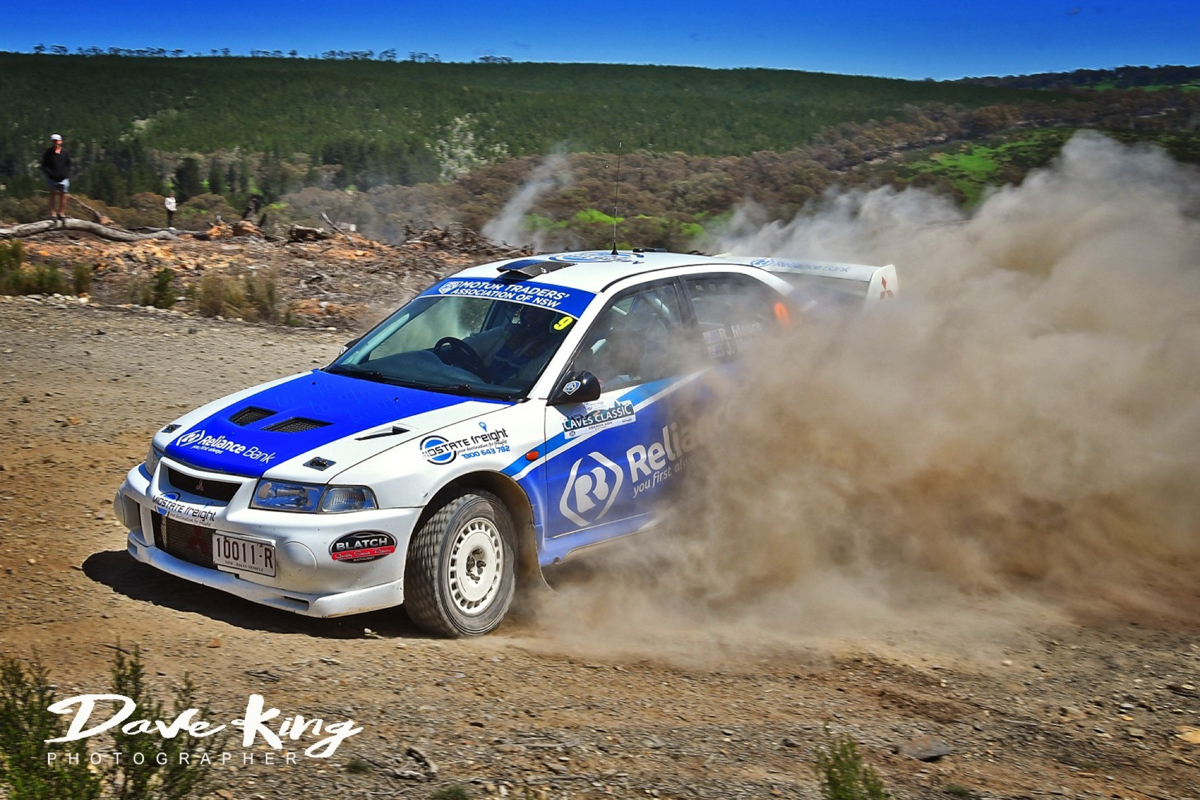 Mal Keough in the Audi Quattro took second, Clarke’s Mitsubishi EVO was 11 seconds back in third. Moore’s great morning loop was enough for fourth, dropping from third at the service after having a ‘moment’ on the slippery section in Bemerang, striking a rock and losing brakes for the last stage. Quinn had run as fast as he could, but the lack of top end speed limited his run to fifth. It was good to see his co-driver, Ray Winwood Smith, back in the car after a serious back injury at the Bay. He completed the event still wearing his back brace. 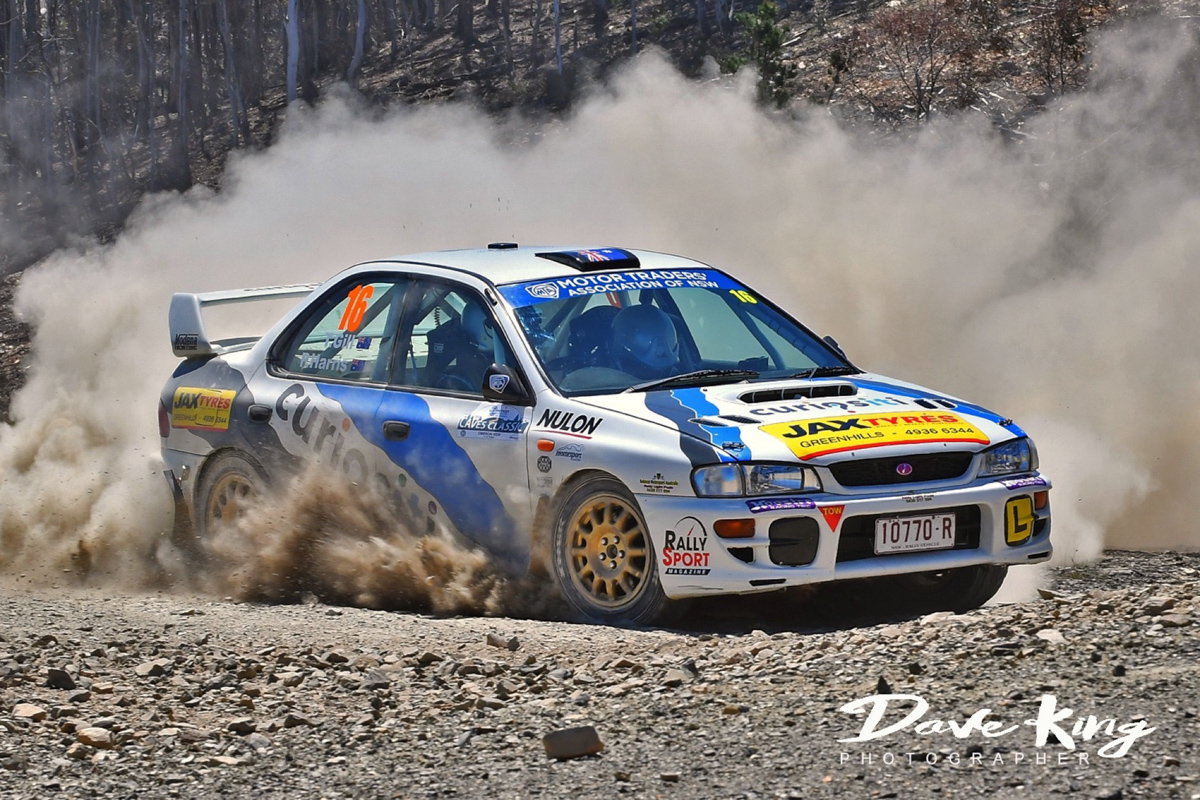 Joass, Giddins, Cullen, Jacques finished in sixth, seventh, eighth and ninth in the Mitsubishi Evos. Rounding out the top 10 was Taylor Gill in his Subaru WRX. The event was a great success and full credit to the North Shore Sporting Car Club officials and volunteers for managing to stage the rally amid the current COVID-19 restrictions. You could see the smiles on faces, and everyone was happy to be back in the forest again. The next round of the MTA NSW Rally Championship takes place at the Monaro Stages in November. Final results, Caves Classic Rally: 1. Sullens/Newell, Citroen DS3, 1h18m11.4s 2. Keough/Bennett, Audi Quattro S1, +2.1s 3. Clarke/Gleeson, Mitsubishi Lancer, +11.2 4. Moore/Moore, Mitsubishi Lancer, +45.5 5. Quinn/Winwood-Smith, Mazda RX2, +1:21.3 6. Joass/Joass, Mitsubishi Lancer, +2:29.5 7. Giddins/Giddins, Mitsubishi Lancer, +3:07.0 8. Cullen/McMinn, Mitsubishi Lancer, +4:27.7 9. Jaques/Taylor, Mitsubishi Lancer, +5:15.1 10. Gill/Harris, Subaru Impreza WRX, +5:18.1
VIP Exclusive Content
Get full, exclusive access for only $6.55/month.
Subscribe Now
Already have an account? Sign in