Thierry Neuville’s win in Rally Argentina was his second successive world championship rally victory this season, his second win on this event and he headed a 1-2 result for Hyundai Motorsport. His teammate Andreas Mikkelsen was second, his first podium result for over a year. Hyundai Shell Mobil are now 37 points ahead of Toyota Gazoo who are three points in front of Citroen Total, for whom Sebastien Ogier had to fight hard even to finish third. After recent heavy rains, this was a dramatic event. There were countless punctures, drivers were controversially penalised for taking short-cuts, heavy crashes for both Elfyn Evans and Esapekka Lappi, and more Toyota electrical troubles for Ott Tanak who fought back to finish eighth.

Mads Ostberg led the R5 cars after three days to win the category by over five minutes. Argentina turned into a Hyundai versus Toyota battle. As expected the Japanese cars were excelling on very fast stretches of stages, the South Korean cars on the more technical parts of the route. After heavy rains had turned the packed roads into quagmires, it was interesting to see which would prevail. In fact the roads dried out surprisingly quickly and by the end of the rally very few wet patches remained. 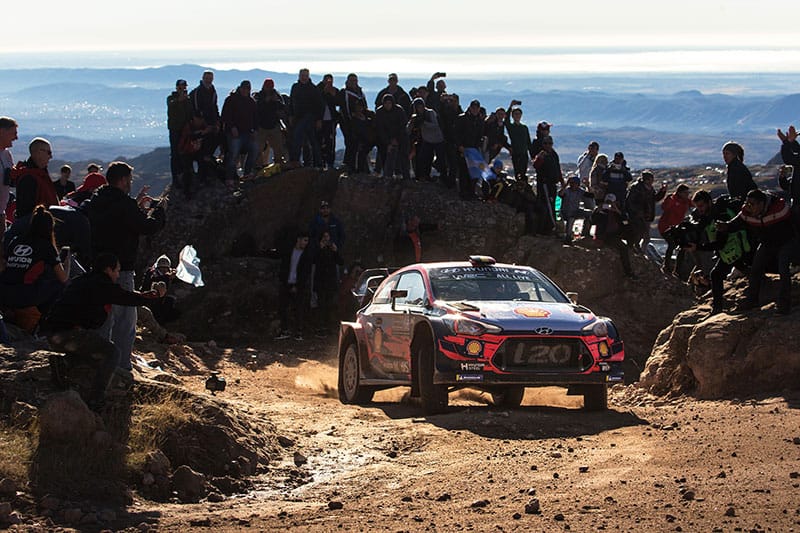 For the first day Toyotas led (even momentarily holding the top three places), but on the Friday evening Tanak broke a driveshaft, Latvala punctured and Meeke had gearbox rouble. From that moment onwards Neuville went in front and gradually Ogier started to challenge in his Citroen. On the second day Tanak resumed his attack, but then in the afternoon he had to stop with battery trouble and missed two stages. This left Hyundai holding the top two places for the rest of the rally. Three Hyundais finished in the top six. Toyotas came fourth, fifth and eighth. At Citroen Ogier was striving but without the success he sought, but snatched a surprising podium place on the PowerStage. Toyota and Hyundai each won seven of the 17 stages, Citroen (Ogier) the other three - all towards the end of the event. 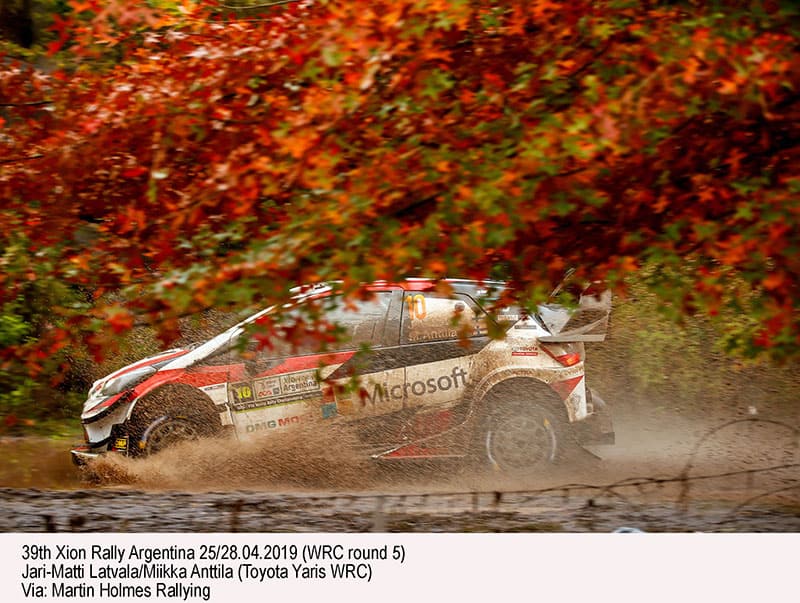 All of this left M-Sport out in the cold. Elfyn Evans scored a third fastest time before he spun off the road, and after impacting a substantial rock he rolled. Teemu Suninen was tackling the event for the first time in a World Rally Car and did well to finish seventh in tricky conditions. Both Fiesta WRCs suffering from engine misfiring in the early wet conditions. Evans’ accident was serious because of the special circumstances of the rally. In order to make the entry of Rally Chile theoretically easier for competing teams, Chile was to be held only two weekends after Argentina, and to save costs the FIA had imposed special rules stating the same cars were to be used on both events. When M-Sport could eventually bring the battered car back to the Service Park, they faced the threat of having to fly another car out from Britain. Instead they decided to withdraw his car and give themselves more time to effect a good repair job before the cars had to be taken across the Andes to Chile. Citroen faced a similar problem, but decided instead to bring another car from Europe for Esapekka Lappi’s use in Chile. 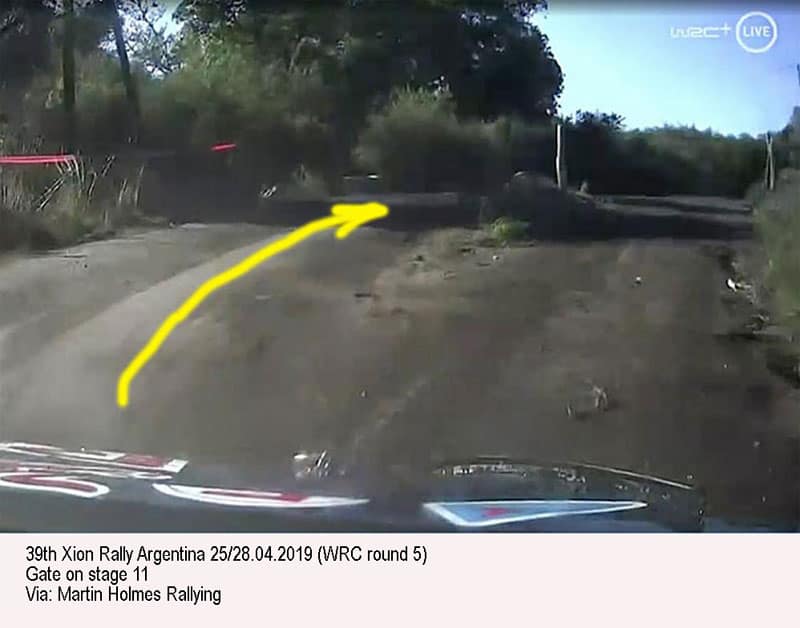 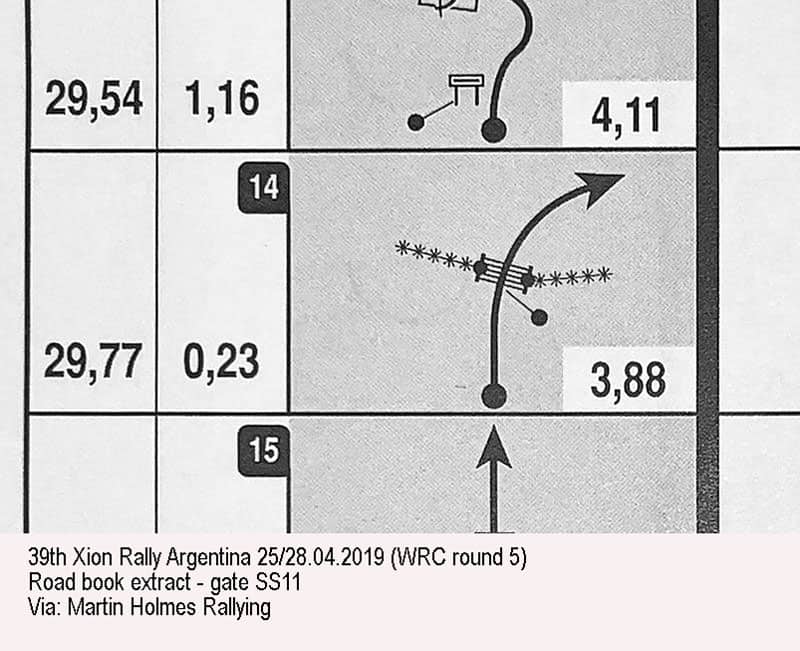 The rally also featured a tricky situation, the affair of the cattle grid gate. Stage 11 used the same route as the year before, requiring crews to cross a cattle grid. Since last year there was a diversion which by-passed the cattle grid. Some drivers took this faster route, against the instructions of the road book. First short-cutting driver was Meeke, followed by his teammate Tanak and next driver along was Ogier. Seeing the rally car wheel marks taking the detour, Ogier hesitated before passing the cattle grid at an awkward angle, a wheel impacting the gatepost and breaking the power steering and causing him to lose over a half minute. It could have been worse because this was the last stage before service where the steering could be repaired. Pandemonium. The Stewards had to react fairly and issued a token penalty of 10 seconds to each driver, enough to drop the principal offender, Meeke, from third to fifth place. For Ogier it was just another episode in a rally where he could not make his car work the way he wanted, and it brought out signs of why he is six times world champion by driving his wayward car to fastest time on the PowerStage. 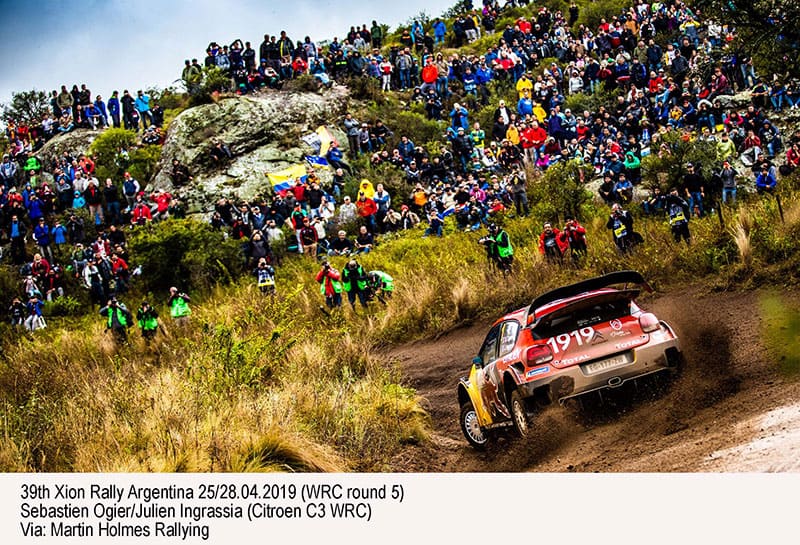 After the penalties were announced it only took Meeke two stages to regain third place, but then a puncture on the final stage allowed Ogier to take the final podium place. The R5 cars were headed by Mads Ostberg who reported that his works developed C3 R5 was much more competitive than before, and that further improvements were on the way later in the season.

He was only one of three drivers competing in the alternative WRC Pro category, along with Gus Greensmith with an M-Sport Fiesta R5 and the 17-year old Bolivian Marco Bulacia’s Skoda. Bulacia had a massive end-over-end accident on the Saturday morning, happily without injury, causing a stage to be abandoned, while Greensmith stopped on the Friday with broken suspension. 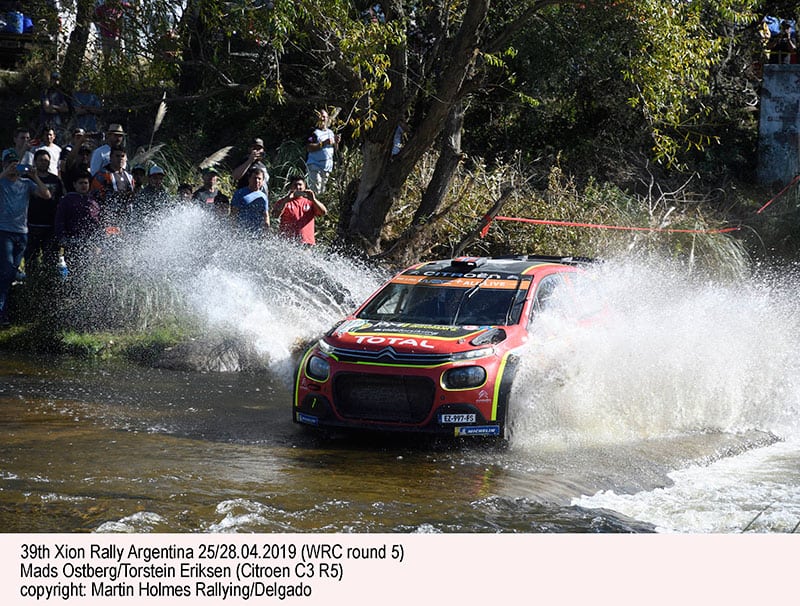 In the WRC2 amateur category early leader Kajetan Kajetanowicz retired after suffering rear suspension damage in his VW Polo GTI, and for most of the event until the end the leader was the Chilean driver, Pedro Heller, who finished some five minutes behind Ostberg. Arrangement have been made for teams to re-prepare their cars in stages, firstly while still in the Rally Argentina headquarters at Villa Carlos Paz, before being trucked over to Conception in Chile. There was a pervading sense of excitement in the WRC for going to the first all-new country in the championship for nine years, and only the third South American country to host the WRC.
Final Overall Classification – Rally Argentina
2019 FIA World Rally Championship for Drivers’ Standings After round 5
2019 FIA World Rally Championship for Manufacturers’ Standings After round 5
All results remain subject to official FIA confirmation.
VIP Exclusive Content
Get full, exclusive access for only $6.55/month.
Subscribe Now
Already have an account? Sign in