Modern-day technology has made ‘classic’ rally cars faster than they have ever been, but back in the mid-1970s there was an attempt to build “the ultimate Escort”, as Jeff Whitten recalls. * * * * * The Ford Escort is now a legendary machine, having achieved a longer period of sustained major results than any other rally car. It was simple to drive in the forests, however, it was never a great vehicle on tarmac surfaces. During the later part of the Mk.2 car’s life, Ford spent a fortune trying to rectify the problem of its tarmac inadequacies and built three ultimate-spec Mk.2s as test cars. The ultimate derivatives were christened the “Monte Carlo cars”, and were to be driven by Hannu Mikkola, Bjorn Waldegaard and Russell Brookes. Ford’s aim was to produce a car that would be the equal of the other tarmac specials such as Lancia, Porsche, Fiat Abarth, Opel Manta and so on. The result was that the tarmac Escorts that they produced were really homologation specials in the extreme. There were numerous minor and major alterations. To make sure that they had the best possible weight distribution, the front suspension turrets were rotated on the forward bolt so that the struts came forward by two inches. This enabled the engine to be positioned further back in relation to the front cross member. The bulkhead (plenum chamber) was removed and its depth reduced before it was re-welded back into the shell. 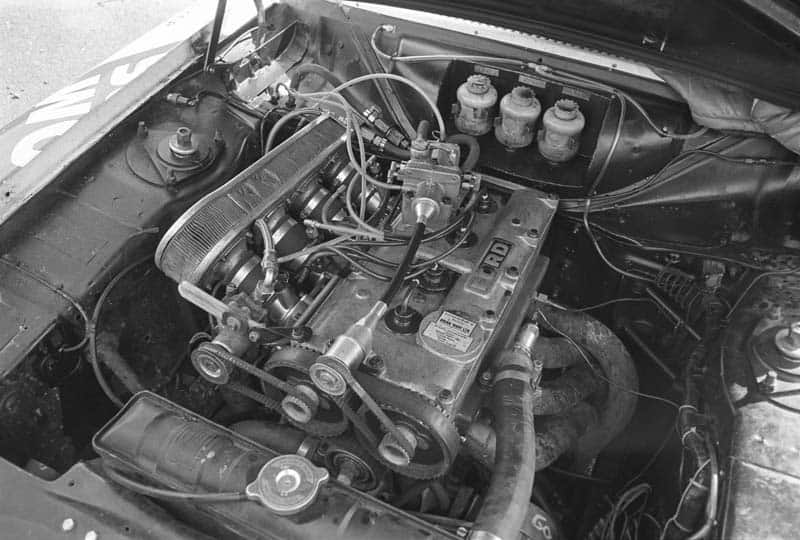 The RS1800 engine had fuel injection fitted to it as early as 1975. Photo: Martin Holmes

This enabled the BDA engine to slot in behind the cross member and it was mounted on outriggers on the chassis, two inches lower than normal and about seven inches further back, relative to the front wheels. To guarantee that the wheelbase remained the same, the rear wheel arches and the axle hump were cut out and re-welded into the body shell two inches further forward, and the axle moved forward to match. The floor pan was cut out of the car and raised about one inch inside the bodywork so that the suspension travel was maintained, and the vehicle was lower in relation to the wheels. The front track was four inches wider than a normal Escort and to match this, wider rear axles were made. This enabled wheels 10 inches wide to be fitted to the cars. These modifications gave the Escorts a 45:55 weight distribution, which made it very similar to a Porsche 911. The resultant car was the meanest looking Escort that existed, its huge front and rear flares being the most visible features and its low stance the other external feature that was immediately visible. As far as performance was concerned, the car handled brilliantly on smooth, winding tarmac, but on narrow bumpy roads, such as are found in Ireland, the car was much less happy. 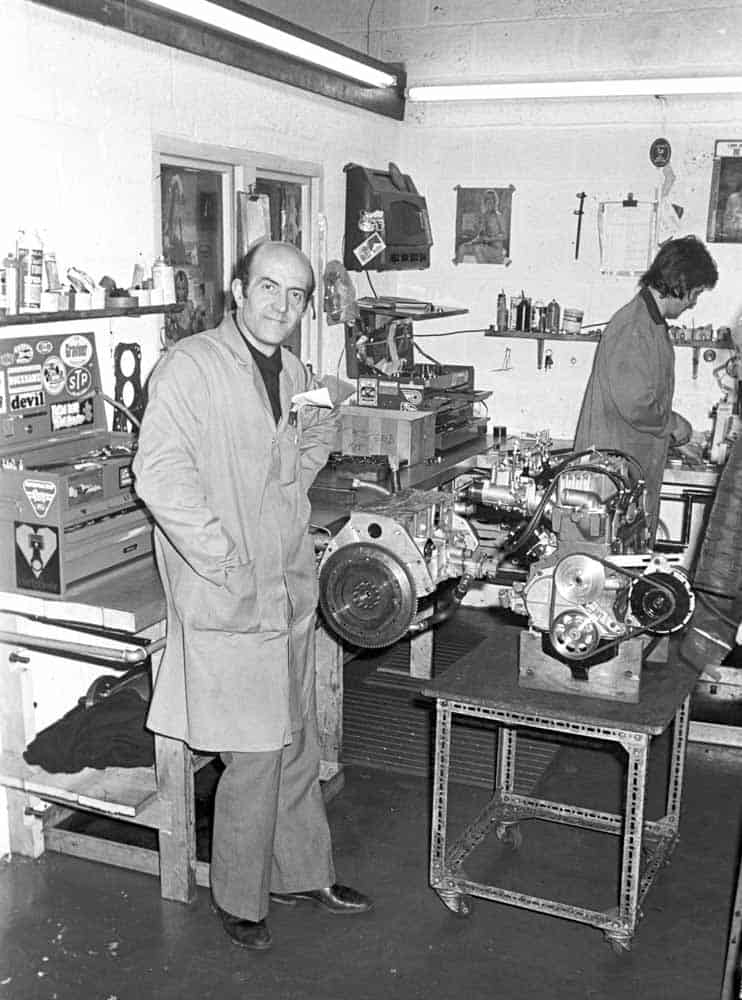 Its track was so wide that it never really fitted into the usual tracks left on the road by other cars, and was permanently running on the edges of the tyres in the gravel on the outside of the road. For one-time British Rally Champion, Russell Brookes, who was given one of the special Monte Carlo Escorts to drive, the car did not leave happy memories . On one Circuit of Ireland, his car left the road and landed on top of a dry stone wall, doing considerable damage. Having had a less-than-successful introduction with the three Escorts, they were quietly withdrawn from competition and relegated to a quiet corner of the Ford workshop. Footnote: Brookes had several other large crashes in the tarmac Escort and finally destroyed it in the 24 Hours of Ypres when the throttle mechanism jammed. The car was running on Kugelfischer fuel injection with the BDA engine delivering in the vicinity of 270bhp. Coming around a very fast bend the throttle slide stuck wide open and as Brookes reported at the time: “As I took my foot off the accelerator the throttle stuck wide open and I hit the brake pedal as hard as I could. 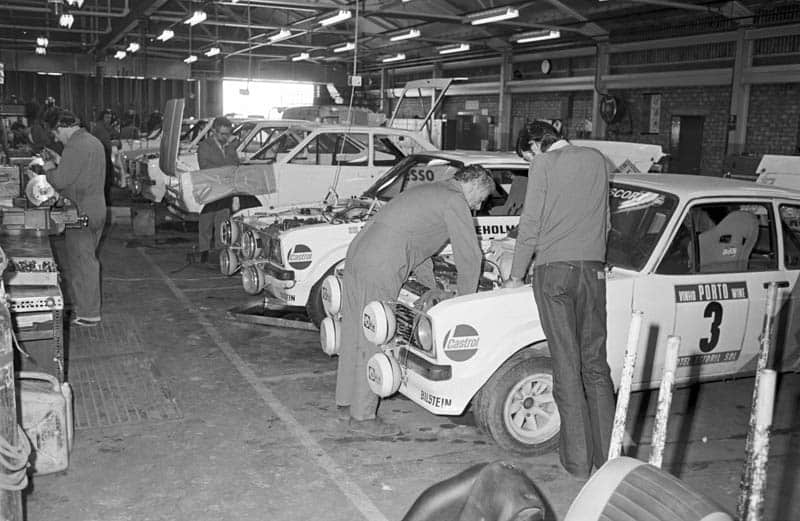 Ford Escorts under preparation at the Boreham facility in 1979. Photo: Martin Holmes

“The car spun, rolled and slid backwards. It finally came to rest on its roof with me still strapped in the seat with my foot stamped hard on the brake pedal. “It was this alone that stopped the engine revs climbing any higher, but eventually there was an enormous explosion and the engine destroyed itself. “The rev limiter had been set at 10,250 rpm, but the tell-tale on this car indicated that it let go at 12,800rpm!” According to Brookes, it was some car, but Ford lost interest when the results didn’t warrant the modifications required to make it competitive into the future. Had the Boreham workshop not lost interest things could have been much different, but time was moving on and Ford had other projects in mind. * * * * * Martin Holmes also co-drove in the ‘Ultimate Escort’, but remembers there were some problems ….. “Not everything between Brookes and Boreham went well.  Before the Tour de Corse we did in 1977, Brookes had asked for a guard to be placed protecting the differential, like he put on his own privately run cars. “Boreham said this was unnecessary on an asphalt rally and did not do it.  We retired because of an impact at a sharp hairpin junction on the stage which split the casing and the oil escaped …..”

The wide-arched Escort on the 1975 Sanremo Rally. Photo: Martin Holmes 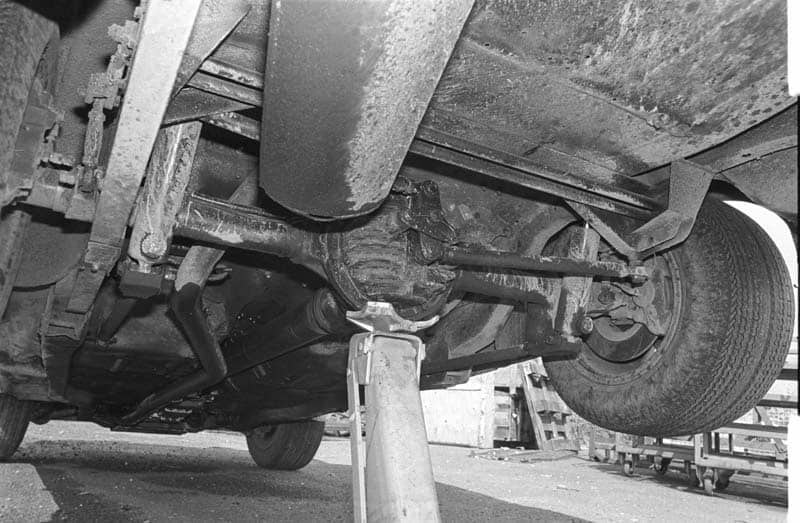 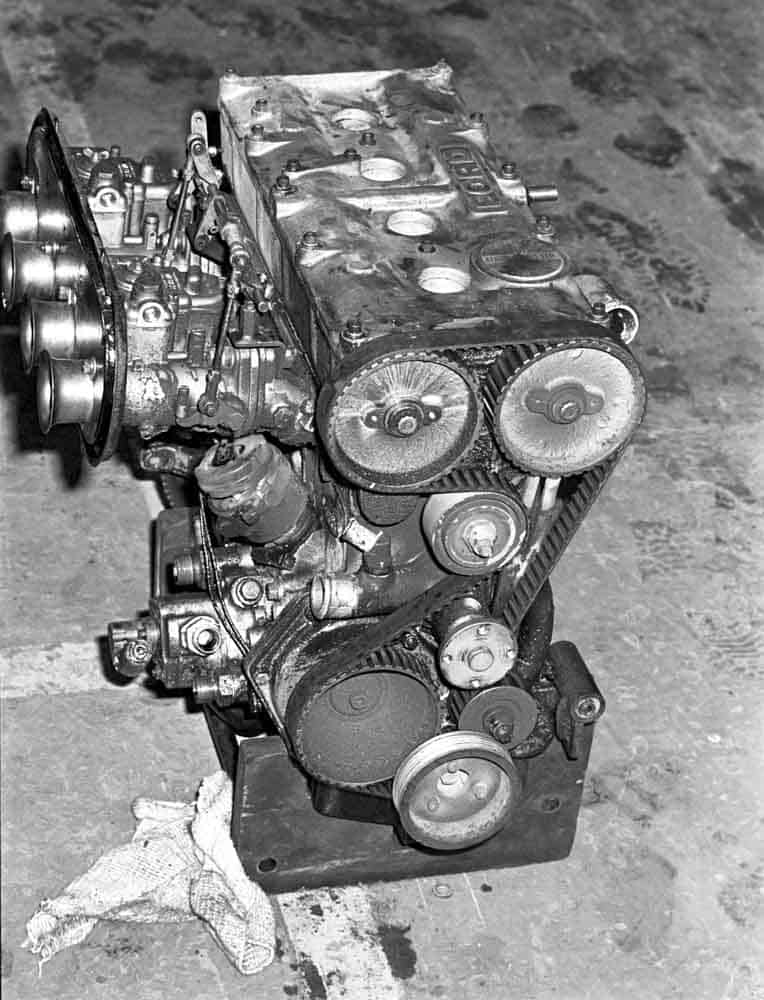