Safety first: the anatomy of a works rally car

How many metres of tubing make up the rally car’s roll cage? What equipment does the crew have in the car during races? Is the car safe? Let’s take a look at the works ŠKODA FABIA Rally2 evo. Safety is at the forefront of rally car design. You may not be able to prevent crashes completely, but you can mitigate the risks and consequences so the crew is as protected as possible. The roll cage is probably the most important safety feature in a rally car - it can save the crew’s lives. Roll cage design is governed by strict regulations issued by the FIA, or International Automobile Federation, which precisely define the acceptable designs, the positioning of the tubes, their diameters and minimum thicknesses. 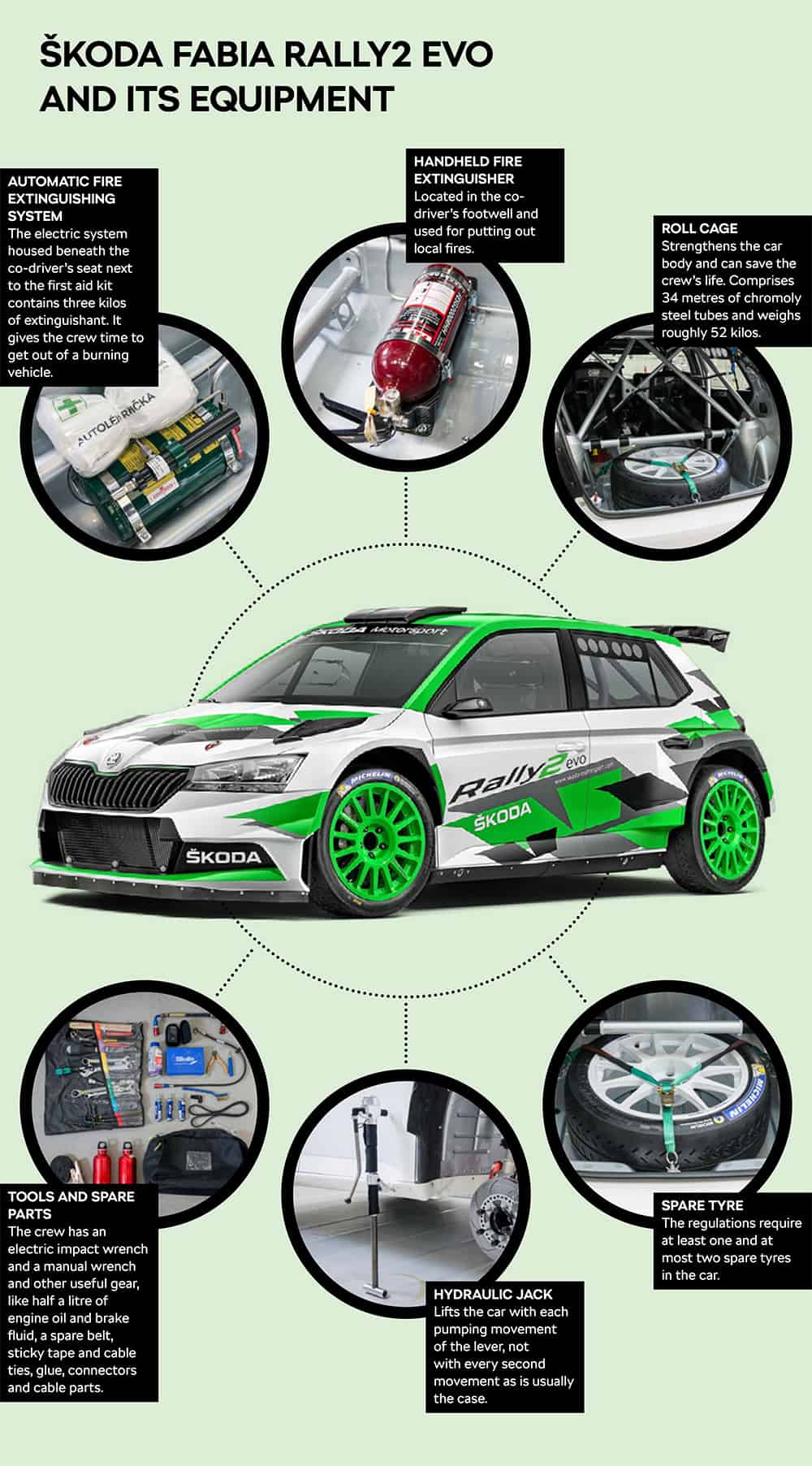 It’s important that the roll cage is as close to the body as possible and provides sufficient room for the crew to get out of the car via the side doors. The roll cage comprises around 34 metres of chromoly steel tubes and weighs around 52 kilos. The roll cage’s maximum deformation, i.e. the force the cage has to withstand, is also prescribed. This calculation is done using computer simulations and is one of the documents presented to the homologation commission. After every crash the roll cage is checked closely: if any damage is found, the car cannot continue in the race. Safety belts are another key security feature connected to the roll cage. And linked in the literal sense. “The shoulder parts of the six-point safety harnesses are attached to the roll cage between the upper anchor points of the rear shock absorbers. The geometry of their mounting is also crucial: the FIA has issued a regulation specifying the crutch, side and shoulder strap mounting angles. At every pre-race technical inspection, the commissioner checks whether the harnesses are damaged or have passed their five-year lifespan,” explains Filip Bezděk. 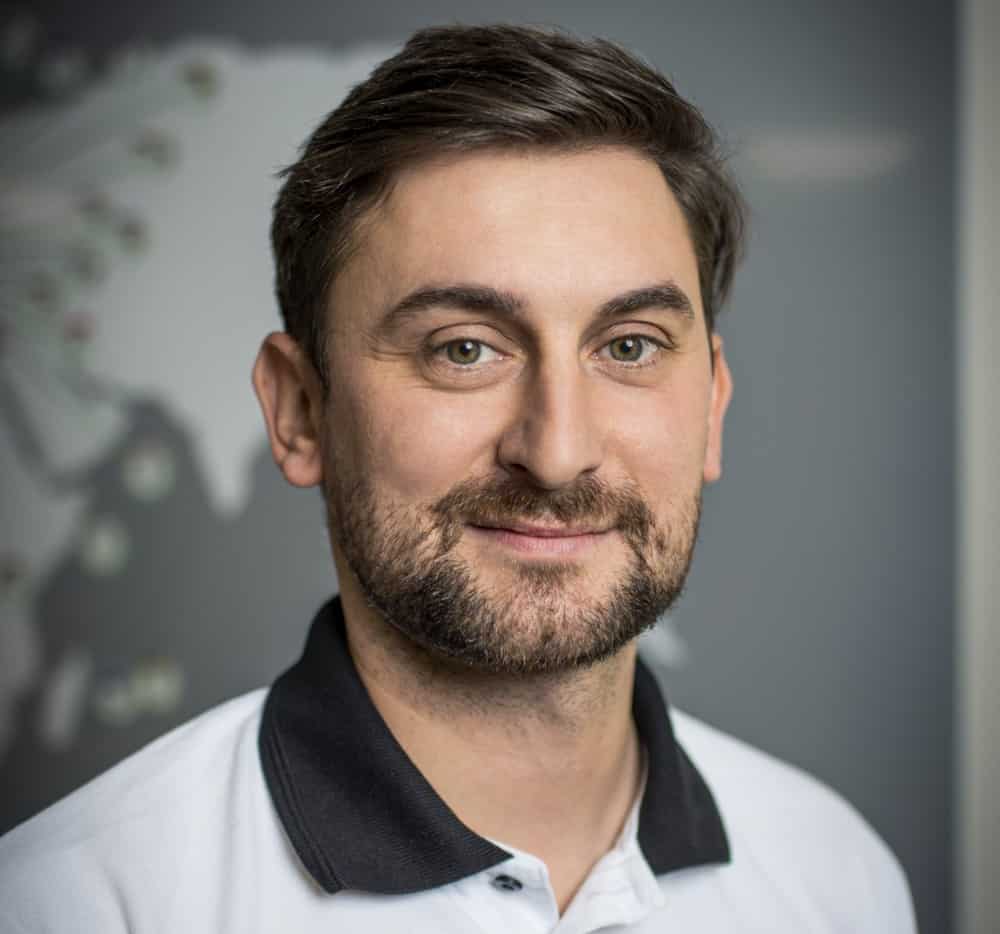 Safety foam in the doors and in the space between door and seat is another important part of crew protection. This foam can absorb a huge amount of energy in the event of a side impact. Again, strict regulations govern their material, volume and geometry. There are also strict rules for making the door panels that cover the safety foam in the doors. Six layers of carbon fibre and Kevlar, with a precise composition and weight, are used to make these panels. The side windows are made of polycarbonate at least four millimetres thick and must be removable without tools. 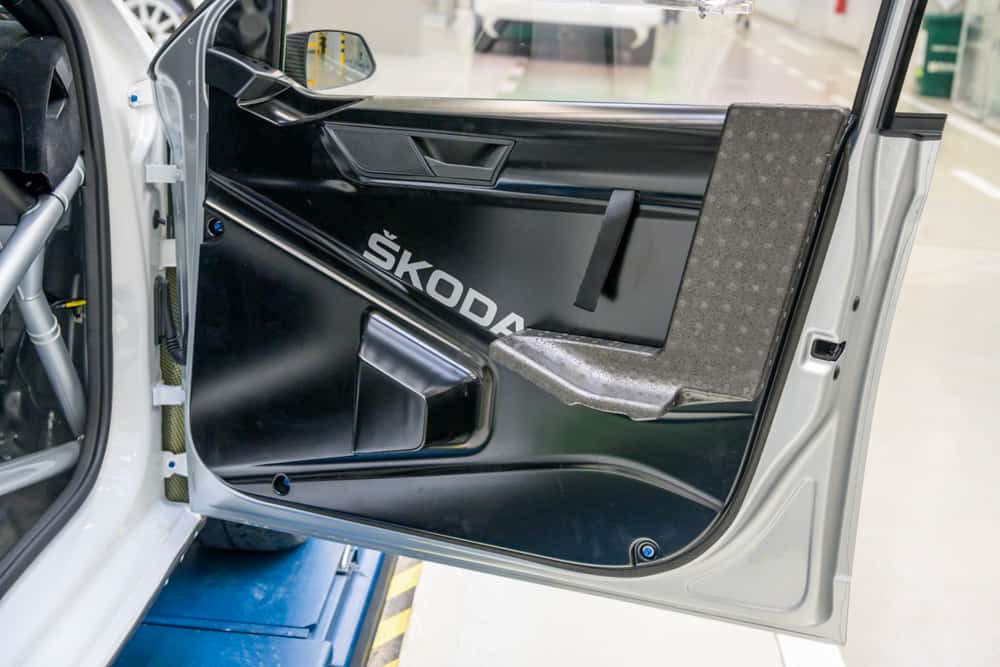 Door panels that cover the safety foam in the car door. Six layers of carbon fibre and Kevlar, with a precise composition and weight, are used to make these panels.

The car contains two types of fire extinguishing system. The two-kilo handheld extinguisher in the co-driver’s footwell is used for putting out local fires. The automatic extinguishing system is electric-powered. It contains three kilos of extinguishant and is installed under the co-driver’s seat. If it is activated, the extinguishant is distributed via aluminium pipes into the cockpit and engine bay. This system can be activated by a button in the cockpit or with a switch from outside the car – beneath the bottom right corner of the windscreen – by a rescuer if the crew is unable to activate it themselves. The system is not designed to fully extinguish a fire engulfing the entire car, but merely to give the crew time to abandon the burning vehicle. 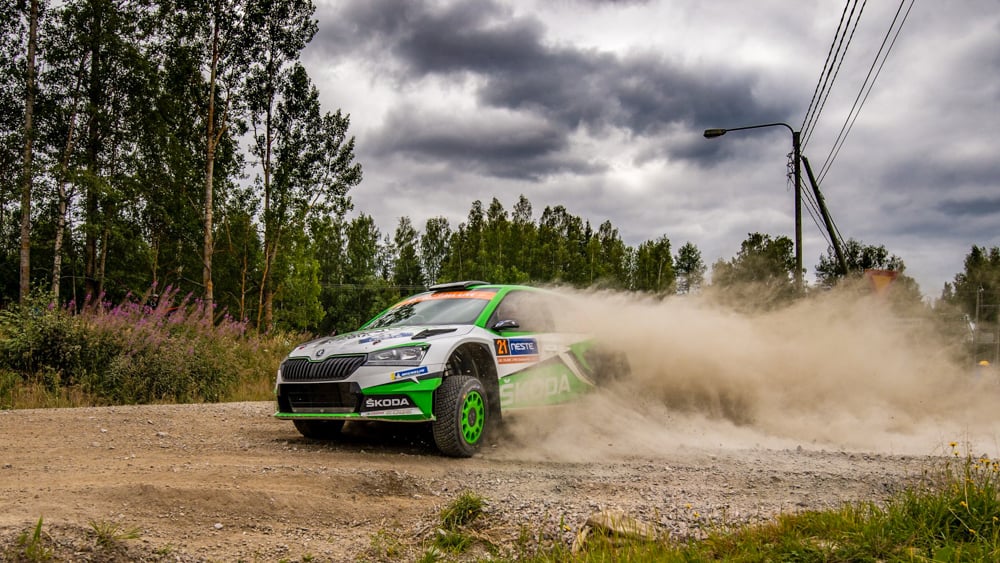 Every driver should feel the car and its behaviour “through the seat of his pants”, and that’s doubly true of racing drivers. This means that seats are crucial elements of the car’s equipment. Seats for Rally2 are subject to FIA homologation defining the permitted shape of the seat shell. Foam and cushioning is used to customise the final form for a particular body shape. The seats can be adjusted longitudinally and up and down. The entire pedal set and the angles of each pedal are also adjustable. Adapters screwed onto the steering wheel and a quick-release connector make it possible to adjust the steering wheel’s distance from the driver. The angle of the steering wheel can also be altered by moving the steering column. “Given his height, Jan Kopecký prefers his seat as low as possible, which means shifting the pedals forward as far as they can go. The steering wheel is also moved further forward,” the Motorsport technician adds.

We’ve spoken about the roll cage, but we should not forget the chassis spares in the car. These are securely attached to the roll cage in the rear of the car in a way ensuring they don’t block access to the spare tyre. There has to be at least one and at most two spare tyres in the car, according to the regulations. The number depends on the rally surface. On tarmac the crew usually takes just one spare tyre, but on gravel there is a much higher risk of puncture, so a second spare is often needed. In some cases, like when the weather is unpredictable, the crew has two different tyre compounds to choose from. 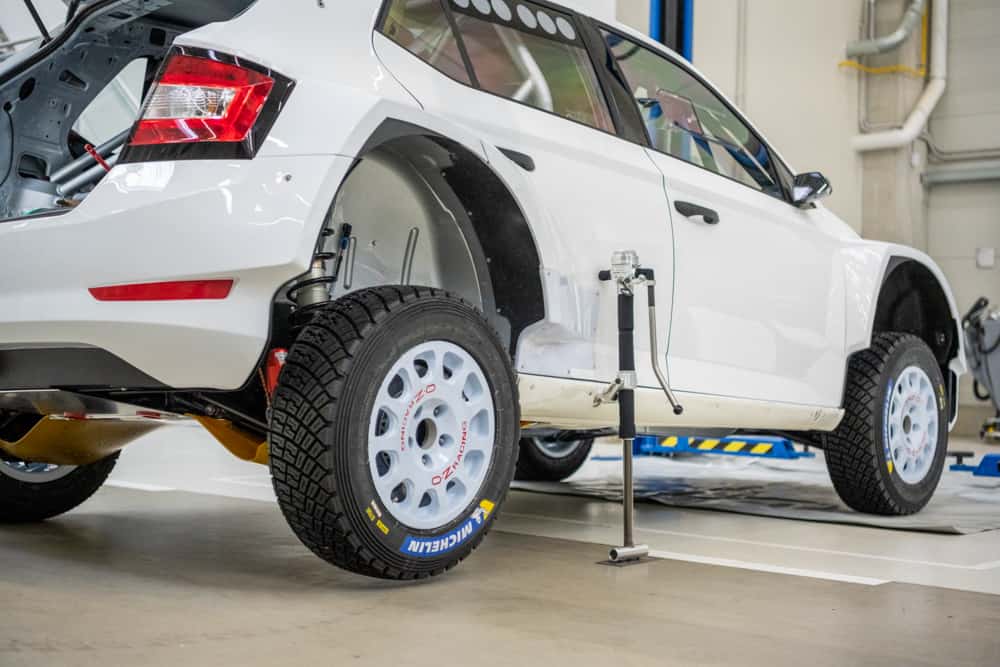 Another interesting piece of kit found in the rear of the cockpit is the hydraulic jack developed by ŠKODA Motorsport technicians. It’s incredibly light, but its double action makes it possible to lift the car as quickly as possible. Unlike standard jacks, every pumping movement of the lever lifts the car, not every second movement. There is an electric impact wrench for loosening and tightening wheel nuts – and there’s not only a spare battery for that tool, there’s a back-up manual wrench as well. “The crew trains all the servicing operations they may need to perform out on the course – like replacing suspension arms, suspension links or the steering column. Their efforts are timed, because speed is of the essence. But practice gives rise to a general time in which a given operation can be completed, and this general figure helps the team decide whether there’s any point attempting the repairs in order to qualify for the next special stage. The time allowed for transport stages tends to be minimal, especially in the Czech championships,” reveals Jan Kopecký, world champion in the WRC2 category and many-times Czech champion. Other essential pieces of equipment in the car’s interior include spare fluids (half a litre of engine oil and the same amount of brake fluid), a spare belt and bits and bobs like sticky tape and cable ties, glue, connectors and cable parts. As the crew spends most of the time outside the service zone during a rally, they need to have some refreshments on hand as well as the necessary technical kit. Usually these are energy bars, bananas and water, which is carried in sacks suspended beneath the seats and the crew drinks through little tubes.

Jan Kopecký : world champion in the WRC2 category for Skoda.

Are you wondering whether works rally cars send all kinds of data in real time to the service centre during time trials or transport stages in the same way that Formula 1 cars do? Well, they don’t. “Telemetry is not permitted for the Rally2 category. There is a USB memory device in the car that records all the driving data. When the car arrives at the service centre, the team’s engineers analyse the data using special software. The sensors recording the data are precisely prescribed, and no others may be used. "The data show how the driver controlled the car: how he used the accelerator, the pressure on the brake pedal, how far he turned the steering wheel, when he pressed various buttons. Data from the engine, transmission and electronics are also important. "All that gives us a picture of the correct working of the car,” says Filip Bezděk, who is in charge of body development, interior equipment and safety features in the ŠKODA Motorsport team.
VIP Exclusive Content
Get full, exclusive access for only $6.55/month.
Subscribe Now
Already have an account? Sign in