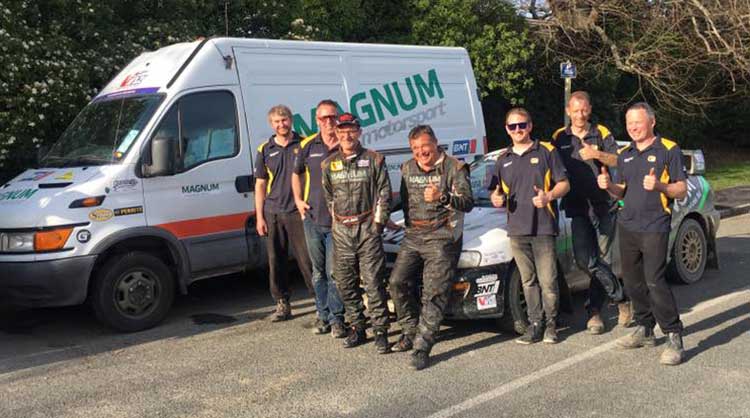 Jeff Judd and Grant Marra celebrate their Mainland Series win with their team.

Carter Strang became the 15th different winner from 15 rallies in New Zealand this year, when he took out the Sprint Rally in South Canberbury on Saturday.

Strong and co-driver, Stewart Robbie, drove their Mitsubishi Lancer Evo 6 to a nail-biting 1.1 second victory over Jeff Judd and Grant Marra in a Subaru Impreza WRX.

The experienced Judd’s second placing was enough to give him the Mainland Series title for 2017, ahead of Deane Buist, who finished fourth on the day in his Ford Escort RS1800.

Third place went to David and Emma Quantock’s Lancer Evo 8, with the top five was round out by the Evo 5 of Jason Clark and Jonty Bressnell.

Full results can be found at www.chrissport.co.nz