Subaru ticking all the right boxes with ARC promotion

The amount of interest surrounding Molly Taylor at the recent National Capital Rally had to be seen to be believed.

While much of the hard-core rally interest was in the brand new Mini Cooper AP4 of Eli Evans, if you were under 18, then it was Molly Taylor and her blue Subaru army that ruled the roost.

Subaru may be the only manufacturer involved in the Australian Rally Championship at present, but they’re clearly using past experience to ensure that they are the most talked about team.

Whenever Taylor’s Subaru WRX STI entered the service park in Canberra the reigning champion was surrounded by a throng of pre-teenage children - both girls and boys - eager to meet her and get her autograph.

You could have been forgiven for thinking that Molly Taylor was a member of One Direction, rather than a rally driver! 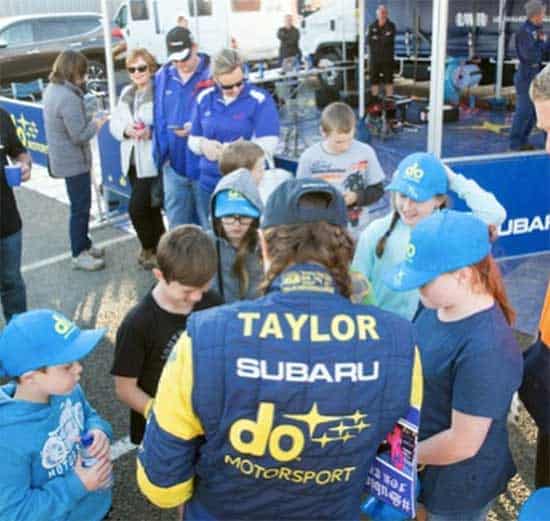 Subaru, through their do Motorsport campaign, are making the most of the increasing interest in the world’s fastest female rally driver.

The youngsters were clambering for Molly Taylor postcards, Subaru wrist bands and temporary tattoos, ensuring her popularity lasts long after the rally finished.

It’s clear proof that a few freebies for the kids will do wonders for a team’s popularity, and might just help to encourage Mum and Dad to select a Subaru when they’re next in the market for a car.

Kudos to Subaru, and here’s hoping that other manufacturers are soon lining up to follow their lead.